Worldwide, wind turbines are increasingly being built at forest sites to meet the goals of national climate strategies. Yet, the impact on biodiversity is barely understood. Bats may be heavily affected by wind turbines in forests, because many species depend on forest ecosystems for roosting and hunting and can experience high fatality rates at wind turbines.

We performed acoustic surveys in 24 temperate forests in the low mountain ranges of Central Germany to monitor changes in the acoustic activity of bats in relation to wind turbine proximity, rotor size, vegetation structure and season. Call sequences were identified and assigned to one of three functional guilds: open-space, edge-space and narrow-space foragers, the latter being mainly forest specialists.

Synthesis and applications. Forest specialist bats avoid wind turbines in forests over distances of several hundred metres. This avoidance was most apparent towards turbines with large rotors. Since forests are an important habitat for these bats, we advise to exclude forests with diverse vegetation structure as potential wind turbine sites and to consider compensation measures to account for habitat degradation associated with the operation of wind turbines in forests.

Wind turbines without curtailment produce large numbers of bat fatalities throughout their lifetime: A call against ignorance and neglect

Abstract – Bats are protected by national and international legislation in European countries, yet many species, particularly migratory aerial insectivores, collide with wind turbines which counteracts conservation efforts. Within the European Union it is legally required to curtail the operation of wind turbines at periods of high bat activity, yet this is not practiced at old wind turbines. Based on data from the national carcass repository in Germany and from our own carcass searches at a wind park with three turbines west of Berlin, we evaluated the magnitude of bat casualties at old, potentially poor-sited wind turbines operating without curtailment. We report 88 documented bat carcasses collected by various searchers over the 20-year operation period of this wind park from 2001 to 2021. Common noctule bats (Nyctalus noctula) and common pipistrelles (Pipistrellus pipistrellus) were most often found dead at these turbines. Our search campaign in August and September 2021 yielded a total of 18 carcasses. We estimated that at least 209 bats were likely killed during our field survey, yielding more than 70 casualties/wind turbine or 39 casualties/MW in two months. Since our campaign covered only part of the migration season, we consider this value as an underestimate. The 20-year period of the wind park emphasises the substantial impact old turbines may have on bat individuals and populations when operating without curtailments. We call for reconsidering the operation procedures of old wind turbines to stop the continuous loss of bats in Germany and other countries where turbine curtailments are even less practiced than in Germany. 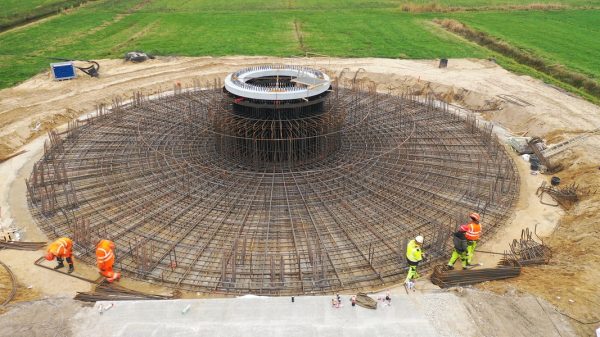