Wind turbines ‘ruin views in most of Scotland’

A map showing wind farms are visible from at least 60 per cent of Scotland is being released today by a leading environment campaign group. 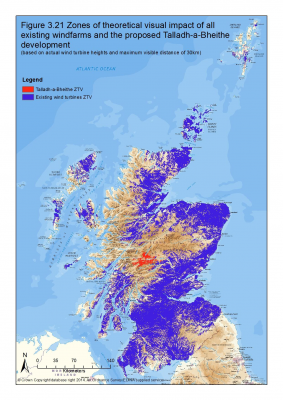 The purple areas on the map represent areas where 410ft high wind turbines are visible at a maximum distance of about  18 miles.

The area coloured red is the site of the proposed Talladh-a-Bheithe wind farm, currently under consideration by Perth and Kinross Council.

The John Muir Trust commissioned the map as part of its objections to the proposed windfarm project near Kinloch Rannoch, which it describes as a “stab in the heart of Scotland’s wild land”.

The group described the area where the new 24-turbine windfarm could be situated, eight miles west of Kinloch Rannoch, as one of the last wild land areas of Scotland not to be “blighted” by wind farms.

It said as well as being visible for miles, the wind turbines would be seen from more than 30 Munros (mountains over 3,000ft) and Corbetts (those over 2,500ft but below 3,000ft).

Helen McDade, head of policy at the environment group, said: “The trust believes that this development would be a stab in the heart of Scotland’s wild land.

“Although our primary aim is to protect wild land, this map as a whole concerns us enormously. Perhaps it is time that the Scottish Government had a rethink and at least saved the remaining visually unpolluted areas of the country.

“Some areas such as Caithness, the Scottish Borders and Dumfries and Galloway must be reaching saturation point. You only need to look at the map to be shocked by what has happened in the last few years.’

“The map is only based on what is currently built and operating. Thousands more turbines are in the planning system and they will impact on thousands more people and homes.”

Dr Steve Carver, director of the Wild Land Research Institute at Leeds University, who compiled the map, said: “Wind turbines are a good thing as long as they are situated in an appropriate place, and wild places are not good places for them.’’

A spokeswoman for the Scottish Government said it supported onshore wind power in the right places as part of a diverse energy mix.

“There continues to be strong public support for the development of wind power and the Scottish Government will continue to support the integration of wind farms into the most suitable places, with careful design and mitigation, to help ensure the wider benefits for Scotland and its communities continue to be delivered,” the spokeswoman said.

“The Talladh-a-Bheithe wind farm application is with ministers for consideration and it would be inappropriate to comment at this time on that  proposal.”