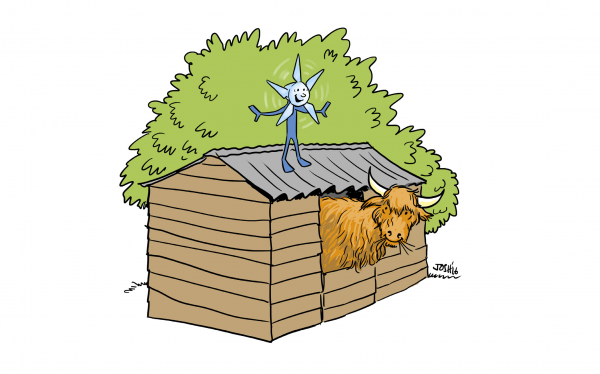 The sun always seemed to shine in Giggly Glen and the people were always smiling.

It was a very happy to place to live.

But then something happened that made the people very sad.

This is the tale of Tiny the Turbine who lived in Giggly Glen, on a pretty little farm that was rented by Mr Barley from the rich landowner, Sir Snatchit.

Tiny really was tiny. No-one could see or hear him. He had sat on the roof of the cowshed for many years and was completely hidden by the big trees of Giggly Glen Forest. Hardly anyone knew he was there.

Mr Barley used him in the winter to charge a little battery to light his cowshed where he kept his cows in the cold dark months. Tiny could just about do that but nothing else and spent the summer sunbathing and watching the wildlife all

around him. When the wind didn’t blow Mr Barley had to use a torch to tend his animals.

Mr Barley had a son, Ally. He was Tiny’s friend and would often go and talk to Tiny. Ally didn’t have many friends but Tiny was always there to listen when he had problems at school.

He said because Sir Snatchit already had Tiny on his land he could get many more turbines, much much bigger ones. It would be called an extension and the man from the Government would say yes.

Mr McWeasel said if he could have permission to build the other turbines he could make Tiny much bigger and make him work harder and bring in lots more money from the Government. They would both be very rich.

He also said he would give the villagers a very small bit of that money the turbines made. It was the same money that the villagers had to pay to the Government in the first place. So really he was just giving the people their own money back. Mr McWeasel didn’t tell anyone that though.

Mr Barley didn’t want Tiny made bigger. Tiny did all he needed and didn’t bother anyone. The big turbines could be a problem for him and his family as they would be very close to their little house.

But because Sir Snatchit owned all the land and said yes to Mr McWeasel, the building of the turbines began.

Tiny was shocked when he saw Mr McWeasel’s men at work. They ripped up all the ground with big diggers, they cut down the trees in Giggly Glen Forest and poured big lorry loads of concrete all over the land. The wild animals ran away and the river turned a dirty brown colour and then … the birds stopped singing, the sun stopped shining and dark clouds spread across the sky.

Mr Barley went to see what was happening and sadly shook his head when he saw the mess and destruction made by Mr McWeasel’s men.

There were ten huge turbines. Each one taller than ten big trees standing on top of one another.

The biggest turbine was Trasher – Tiny’s very distant cousin – so named because he destroyed everything around him wherever he went.

Trasher was a bully. He was the ringleader of the other turbines. They laughed and jeered at Tiny because he was so tiny and rarely worked even though he did all Mr Barley wanted.

Mr McWeasel went to see Tiny. “You are too small. You don’t earn any money. I will order some parts and make you bigger and you will work harder for me.”

But then something else happened that really upset Tiny. His friends the birds were being hit by the blades of the big turbines. He told Mr McWeasel that he didn’t want to get any bigger and if he made him then he would refuse to work. He would go on strike and his blades would never move. He would not harm the birds.

Mr McWeasel was furious and ordered Tiny off Sir Snatchit’s land. “No-one disobeys me,” he said. Tiny looked to the other turbines for help but they just all stood and laughed at him.

“Go away,” shouted Trasher. “There is no place for someone like you here. You are not even big enough to boil a kettle! We need to earn money for Sir Snatchit and Mr McWeasel and if the birds get in the way then that is their hard luck.”

So Tiny left and was found by Ally, sitting crying on one of the trees cut down by Mr McWeasel’s men.

He listened to Tiny’s sadness about the birds and having to leave his home on the cowshed roof, just like Tiny had listened to him so many times when he had been sad.

Then he told Tiny what was happening to his family because of the turbines. He told him how his mother and father couldn’t sleep because of all the noise from Trasher and his friends. His father had crashed his tractor into the hen house the other day when he was so tired and had fallen asleep at the wheel.

Ally said he couldn’t sleep either and sometimes felt scared when he heard the thumping and swooshing of the turbine blades in the night.

It felt like the whole house was vibrating. The only time they got any peace from the awful noise was when the wind wasn’t blowing and the monster turbines weren’t turning. His mother often complained of headaches and never smiled any more. The chickens had stopped laying their eggs since the turbines came. Ross the sheep dog had starting hiding in the barn and wouldn’t come out and work the sheep.

Tiny jumped up! “This is not right,” he said. “We must stop it. Let’s go to the village and tell the people what is happening here.”

The village hall was crowded. People were shouting and angry.

“My children can’t do their homework with that terrible din going on,” said Mr MacMillan from the bakery.

“The pupils can’t concentrate on their lessons any more with the never-ending noise,” said the Headmaster of the local school, Mr Knowall.

“My wife feels poorly all the time now. She says she has buzzing in her ears that never stops – not even when the turbines do,” said PC Doyle.

“I saw some bits break off one of the turbines – they flew a long way. They nearly hit me,” said Stan the Handyman.

“What if they caught fire?” asked the Fire Chief. “We couldn’t put a fire out so high up in the air.”

“My cat has left home and I have terrible headaches and feel ill every day,” said Mrs Miggins from the Post Office.

“I would sell my home and move away from Giggly Glen and those horrible turbines, but nobody will buy my house,” said Mr Donald.

“I saw the helicopter from the coastguard fly too close to the turbines when it was misty. There could be a nasty accident,” said Mr Foggarty.

“Enough is enough,” shouted Mr Barley. “We cannot live like this!

Mr McWeasel and his monsters cannot be allowed to ruin our lives and make us sick. Let’s send them away from Giggly Glen.”

“But how?” cried the villagers. “They are so big and frightening and dangerous for us to be near.”

Tiny turned to Ally and said, “Take the villagers to the turbines and I will meet you there.”

And so all the villagers, led by the now brave and confident Ally, marched up to Sir Snatchit’s land where they were met by Mr McWeasel standing in front of Trasher and the other turbines.

“We are here to tell you to go. You are making us ill. Living in Giggly Glen has become a nightmare since you arrived,” Ally shouted up to them.

“So what?” snarled Mr McWeasel. “What are you going to do about it, little boy?”

Trasher and the other turbines sneered and laughed at him.

The villagers were scared but then Ally pointed to the lane and yelled, “Look who’s with Tiny.”

There was Tiny sitting on top of his dear old friend Tuska the retired tank, chugging towards the turbines.

That was enough for Mr McWeasel. “Pack up lads we are off; we hated Giggly Glen anyway; not enough wind and not enough money.”

With that, Mr McWeasel, Trasher and his terrible friends were seen running off into the distance and as they did the clouds parted, the sun shone, the birds started singing and the deer and the rabbits came back. The hens started clucking as they looked for somewhere to lay their eggs and Ross the sheep dog came out from the barn wagging his tail.

Tiny looked around, smiled at all the happy villagers, winked at his little friend Ally and went back to the cowshed roof where he settled down for an afternoon snooze in the sunshine.

Peace and happiness had returned to Giggly Glen.

Written by Lyndsey Ward, with Cartoons by Josh

Tiny the Turbine is available as a PDF to download and you may print for personal use or email as you wish and, if you like what we have done or wish to use it in your own campaigning, please make a donation on Josh’s website www.cartoonsbyjosh.co.uk/tiny-the-turbine to help fund this and possible future projects. All contributions, large or small, are gratefully accepted and appreciated.

If you would like to buy a printed copy please contact Josh via his website – www.cartoonsbyjosh.co.uk.
For any commercial resale or reuse please email Lyndsey Ward – subsidy.sam@btinternet.com.