Taking the hot air out of wind power

The idea of wind generated electric energy is being sold by environmentalists as an overlooked opportunity to reduce greenhouse gasses. Global warming advocates claim that this discounted treasure could be a major part of an effort to reduce the burning of fossil fuels and eliminate the need for some of our nuclear power plants.

Is it true that we are passing up on a gold mine of renewable energy in favor of unnecessary and harmful fossil and nuclear fuels?

Let’s start by looking at what we use to generate the power we use today. Renewables, such as wind, solar, biomass, etc, provide 2.4% of our electricity. The bulk of our power, 51%, comes from coal, followed by natural gas at 20% and nuclear at 19%.

Included below in the category “other renewables”, wind energy is currently supplying about 1% of our electricity 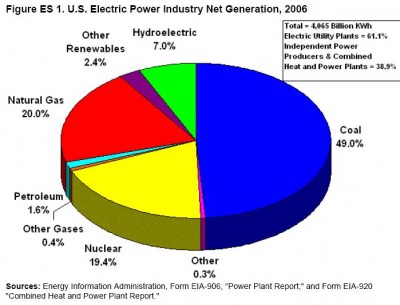 Can we replace coal and natural gas with renewable energy sources? Let’s examine the facts.

Wind energy is harnessed by windmills that are similar to the types that have been around for centuries. The windmills that produce electricity are called wind turbines; they employ fan blades that turn when the wind is blowing. These blades are connected to electric generators.

Keep in mind that sometimes the wind blows slowly or not at all, and windmills don’t produce any power until the wind reaches about 8 MPH. A location for a windmill is not considered viable unless wind speeds average 14 MPH.

(Electrical [power] is measured in units called watts. A kilowatt (KW) is 1,000 watts, a megawatt (MW) is a million watts. )

A typical large wind-driven turbine is rated at about 1,500 kilowatts. It’s 350 feet tall and has a fan blade of about 240 feet in diameter. It will actually deliver about 375 kilowatts. It can power about 375 microwave ovens, or 6250 60-watt light bulbs simultaneously (only when the wind is blowing at about 25 miles per hour, which is a very strong wind). An average (1 gigawatt) power plant can power nearly a million microwaves, or 16 million light bulbs at the same time.

A power plant near me produces 1,100,000 kilowatts (1.1 gigawatts) of power. At a 25% capacity factor it would take nearly 2600 large wind turbines to produce the same power as this nuclear power plant. And this is not a particularly large plant.

If you placed these 2600 wind turbines the recommended 5 rotor-blade diameters apart, they would stretch for 600 miles. That’s as far as the distance from Michigan to Georgia. In practice wind turbines are not placed single file, they are placed in several rows, like crops, in what are called wind farms, but you get the idea.

Unfortunately, there is no easy way to store these bursts of energy for later use. There are no batteries large enough that are also practical, and pumped-storage systems, which use unwanted energy to pump water into an aboveground reservoir for later use in turning a water-driven generator, require a large body of water.

And when there is no wind, windmills produce no power, so a traditional power plant must be operational at all times to provide power during those in-between times.

Also, most areas of the country have so little wind that wind turbines are not practical. As indicated in the wind resource map below, most of best energy-producing wind power areas are located far from population centers. The white areas are those that don’t have fast enough winds to make wind power viable. 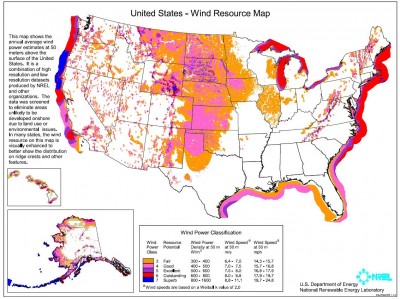 Wind power does work. It is a clean and renewable source of energy. But it does have its limitations; we would have to have wind turbines stretching from sea to sea to equal the energy output we can get from traditional power plants, and they would only be a match for conventional power plants when the winds were strong. On calm days they would produce no energy.

And since most of the power would be generated in unpopulated areas, because that’s where the strong winds are, (see map above) we would have to incur huge losses to transport this energy to where it is needed.

And after all that, we would still need to maintain our current system of traditional power plants because we would have to have a backup source for when the wind is calm.

All things considered, wind power has limitations that will relegate it to a role as a supplementary, not a primary, source of our electrical energy.

So the next time you hear a pundit say that we should throw over fossil and nuclear fuel in exchange for wind, know that it is not possible. And any proposals that are predicated on the replacement of natural fossil fuels, such as the replacement of real jobs with “green jobs” is as fallacious as an equation that is predicated on 2 plus 2 equaling 5.