This post, the second of three installments, reviews the major research findings linking low-frequency noise and infrasound from industrial wind turbines with effects on health and quality of life.[1] [Part 1: Some Background; Part 3: How the Ear and Brain Process infrasound; Addendum: A Four-Decade History of Evidence that Wind Turbines Pose Risks]

Evidence that industrial wind turbines (IWTs) negatively impact human health is vast and growing. Although that evidence acknowledges that the exact exposures needed to impact health and the percentage of the affected population are still unknown, there is indisputable evidence that adverse health effects (AHEs) occur for a nontrivial percentage of exposed populations. Here, we give an overview of that evidence.[2]

The anecdotal evidence, documented on internet blogs, in newspaper articles, in expert testimony in legal proceedings, and recently in the documentary movies Windfall and Wind Rush, is compelling and illustrative of the similarity in symptoms. These adverse symptoms appear when people are exposed to operating wind turbines, and disappear when the turbines stop operating. These observations resemble single-subject research experiments, in which individuals serve as their own controls while being subjected to alternating conditions or treatments. Dr. Carl Phillips, noted epidemiologist, describes the use of adverse event reporting as a first step in establishing the existence, prevalence, and spread of a variety of health conditions, as well as adverse reactions to such agents as medications and environmental pollutants.

Studies conducted in Denmark, the Netherlands, Germany, and Sweden, where residents have many decades of experience with IWTs, collectively indicate that wind turbine noise differs from and is more annoying than other sources of noise, including community, transportation, and industrial sources.

These differences are attributed to the substantial infrasound and low-frequency noise (ILFN) produced by the turbines. Such sounds are not easily masked by other environmental sounds, including wind noise. 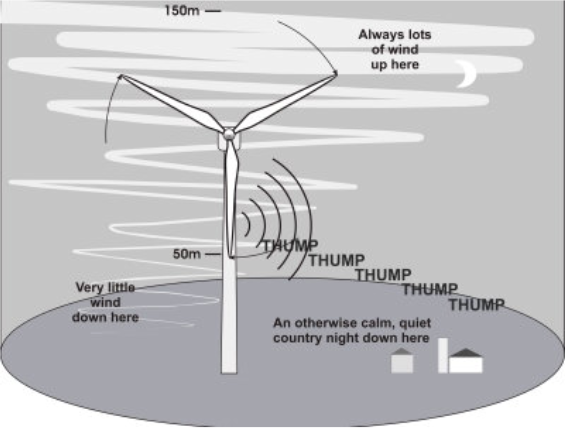 As the blade passes the tower, infrasound pulses are emitted, while more audible low-frequency sounds are produced by blade movement. Used by permission of Esther Wrightman, Ontario.

Annoyance from turbine noise at 35 dBA corresponds to the annoyance reported for other common community-noise sources at 45 dBA. The World Health Organization (WHO) has concluded that observable effects of nighttime, outdoor noise levels of 40 dBA or higher will lead to diminished health. This also occurs when levels inside homes (especially bedrooms) rise above 30 dBA or contain non-steady and/or low-frequency noise.

Yet, the wind industry commonly promotes 50 dBA as an appropriate limit for homes, even though the World Health Organization has identified such high levels as a cause of serious health effects.[3]

By far, sleep disturbance is the most common complaint of families living near wind turbines. Prolonged lack of sleep affects our capacity to learn and negatively affects our memory, temperament, heart health, stress levels, and hormones that regulate growth, puberty and fertility. It can also lead to high blood pressure, changes in heart rate, and an increase in heart disease, as well as weight gain and lowered immunity to disease. These symptoms have regularly been reported by individuals who live near IWTs.

In a controlled clinical study, residents who lived within 1.4 kilometers, or 0.87 mile, of IWTs exhibited greater sleep disturbance and poorer mental health than those living at distances greater than 3.3 kilometers, or 2 miles, away, and scores on sleep and mental-health measures correlated well with noise exposure levels. Another study found lower quality of life (QoL) in residents living within 2 kilometers of a turbine installation than at longer distances. Abandonment of homes near wind turbines has been associated primarily with disruptions to sleep and QoL.

Nina Pierpont, MD, PhD,[4] and a practicing pediatrician, coined the term Wind Turbine Syndrome (WTS) in 2009 to describe the symptoms she observed in a cohort study of 38 members of 10 families. Those symptoms include: sleep disturbance; headache; Visceral Vibratory Vestibular Disturbance (VVVD); dizziness, vertigo, unsteadiness; tinnitus; ear pressure or pain; external auditory canal sensation; memory and concentration deficits; irritability and anger; and fatigue and loss of motivation. Although her case-series report, published as a book, has often been maligned by the wind industry as being non-scientific, an increasing body of scientific evidence supports her observations and their links to exposure to wind turbines. Dr. Robert McMurtry, a well-respected Ontario physician, recently proposed specific diagnostic criteria for a case definition of AHEs due to IWTs.

In 2009, a joint report of the American and Canadian Wind Energy Associations (AWEA/CanWEA) established the basis for arguments routinely used by wind energy advocates to persuade the public and public officials that IWTs present no health risks. The panel members who produced the report were handpicked by AWEA’s acoustical consultant, and all had prior positions on noise from wind turbines favorable to the industry.

The report concluded that exposure to wind turbine noise has no direct adverse physiological or health consequences, a conclusion shown to be erroneous by multiple lines of evidence, at least several of which were established prior to the report. The report’s major weaknesses were its comparisons of wind turbine noise levels to those produced by other environmental noises and its embrace of the A-weighted measurement scale as valid, even though that scale minimizes low-frequency sound and completely excludes infrasound.

Several scholarly researchers have rejected the AWEA/CanWEA report as misleading and unscientific. One of the report’s co-authors, Dr. Geoff Leventhall, whose own research demonstrates that ILFN leads to various health symptoms, attributes those symptoms to extreme psychological stress from low-frequency noise, but does not acknowledge that IWTs also cause such symptoms. He argues that the ILFN emitted by wind turbines falls below the threshold of hearing, claiming that what we can’t hear can’t hurt us—a topic we will address in our final installment.

[1] Part 1: Some Background. Part 3: How the Ear and Brain Process Infrasound.
[2] Of note: the authors of this series are currently preparing a comprehensive, fully referenced paper for publication elsewhere.
[3] Night Noise Guidelines for Europe set limit at 40 dBA.
[4] MD degree earned from Johns Hopkins and PhD from Princeton.