Comments on SA EPA and Resonate Acoustics report: “Infrasound Levels Near Windfarms and in Other Environments”

Various wind developers and industry lobby groups both in Australia and around the world have been claiming that the recent report issued by the South Australian EPA and Resonate Acoustics is a scientifically valid document, that has confirmed infrasound associated with wind turbines is a non-event and persons raising such issues are simply scaremongering. A cursory examination of the document as set out below suggests a substantial degree of incompetence or alternatively, that it is a document intended to mislead the community.

The primary function of the document purports to indicate that the use of the dB(G) parameter is appropriate for accurate and complete measurement of infrasound. After selective testing of a number of sites, there is a claim that both rural and residential areas experienced dB(G) levels higher than that associated with wind turbines.

The authors claim in Section 2.1 that the dB(G) parameter covers the majority of the infrasound frequency associated with wind turbines, and then immediately provides a graph of the G-Weighting filter obtained from the ISO Standard 7196. … 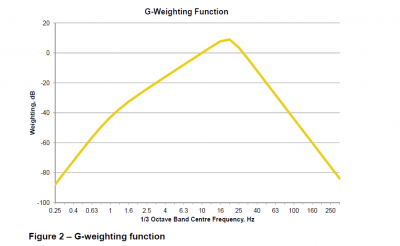 At 6.3 Hz, being a typical lower limit of some sound level meters that can provide 1/3 octave band results, the dB(G) filter has a value of 8 dB below the reference level at 10 Hz. Similarly at a frequency of 1 Hz (that is typically near the blade pass frequency of modern day turbines) the filter exhibits a level of 43 dB below the 10 Hz 0 dB reference level.

Using dB level expressed in a linear (un-weighted) format, the frequency spectrum from modern day wind turbines is predominantly elevated in the 0.7 to 6 Hz region. It is therefore apparent to those appropriately trained in acoustics that the dB(G) value does not cover the majority of the infrasound region generated by turbines.

For example, later in the report (Figure 29) there is a 1/3 octave band spectrum chart limited to the frequency range of 0.25 Hz to 20 Hz that is reproduced below. 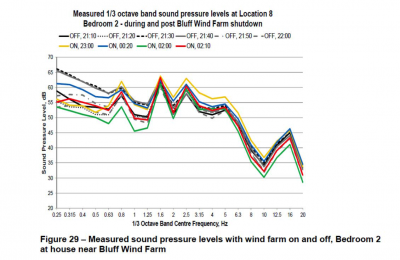 Examination of the above chart clearly indicates a significant degree of energy in the lower portion of the infrasound band. When it is superimposed with the dB(G) curve (Figure 2), it shows the claim as to the relevance of the dB(G) for infrasound noise from turbines to be incorrect.

The report goes to great lengths to discuss measurements conducted at various locations in office buildings and suburban environments, with suggestions of likely noise levels influencing the infrasound results that appear to be somewhat vague and non-specific. Persons experienced in conducting measurements in such environments will be well aware of the influence of air conditioning controlling the background levels (especially infrasound being associated with airflow). Despite acknowledging one building having air conditioning, with the increase in levels that follows, the time period of office environment, the concept of air conditioning determining the environment at a number of locations appears to have been conveniently overlooked by the authors of the report.

Similarly in terms of infrasound in houses the report is not specific as to the source of the internal noise, or the influence of external noise or weather conditions at the time. …

A significant criticism in relation to the 1/3 octave band measurements, is that whilst conducting a 10 minute Leq assessment, the authors chose to utilise a time response of 10 second averaging, rather than fast response as required by their own documentation for compliance testing. Reliance on the 10 second average appears to be related to the low frequencies of concern without identifying the reduction in measured levels that would follow, when compared to the assessment procedure in their guideline. Clearly the use of a long averaging time reduces the impact of the fluctuations or modulation associated with the emission of low frequency in infrasound noise from turbines. This is important, because it provides a lower measured level that occurs and as such reduces the level that would be identified as the peaks the ear “hears” rather than the “averages”.

It is also noted that the report does not address low-frequency noise which one assumes would also have been obtained during such testing. Low-frequency noise has recently been shown by Professor Con Doolan to be directly associated with specific symptoms under the label of “annoyance” and the severity of those symptoms correlated precisely with the “dose” or SPL of sound energy present in those frequencies at the time. …

The report purports to identify that the natural environment for a house near a wind farm exhibits spectral peaks associated with the blade pass frequency and the first few harmonics even when the turbine is not operating, which seems to defy the laws of physics and measurements that have been conducted at various residential properties by consultants both in Australia and the United States. The fact that the authors of the report are claiming that there are noticeable spectral peaks at the typical blade pass frequency and multiple harmonics, even when the wind farm is shut down, questions the validity of the report. It may be the case that not all turbines were shut down as suggested in the report and that there may well have been turbines within 10km of the measurement site still operating, whose acoustic emissions were affecting these measurements. Measurements of ambient noise in rural areas in the absence of turbines do not experience the spectral peaks at the blade pass frequency and multiple harmonics as suggested in the report. …

As both the EPA representative and the authors attributed to Resonate Acoustics are aware of the communities’ concerns and issues pertaining to modulation, tonality, audibility, sleep disturbance and adverse health impacts, then the conclusions of the report based on inaccurate technical information leads one to question the objectives of the study. It would appear that Resonate Acoustics are regularly employed by the wind industry. Documentation from the community questions both the independence and the conduct of the nominated EPA officer with respect to dealings with the community in relation to other wind farms.

Without the appropriate material as to various operating scenarios of wind farms, wind direction, wind speed, power output of the wind farm and identification of the nature of all turbines so operating, and without any independent verification of the testing and the results (as per the Wisconsin Shirley wind project Cooperative study involving Messrs Hessler, Walker, Rand and Dr Schomer) then little weight can be placed upon the conclusions or the validity of the report as to the facts of infrasound from large industrial wind turbines and their impact on health. On the contrary the contents of the report support the concerns raised by the community as to the conduct of both organisations (the EPA and acousticians who work as consultants to the wind industry) and clearly demonstrates the need for independent monitoring and observations to occur in the forthcoming Waterloo study involving the community and requires both outside and inside measurements.

I consider that as a minimum, the proposed EPA study at Waterloo in South Australia should incorporate full-spectrum measurements similar to that provided in the Wisconsin study with both 1/3 octave and narrowband analysis incorporating simultaneous inside and outside measurements and incorporating on/off testing of the wind farm.

In addition to the provision of all the noise data it is imperative that in conducting a proper and independent test that all of the material in relation to the operating parameters of the wind farm, prevailing weather conditions etc. be available to the review team (also including representatives on behalf of the community) so as to ensure that study is fully independent and not contaminated such as in the case of the recent report issued by the South Australian EPA and Resonate Acoustics.

Download original document: “Comments on SA EPA and Resonate Acoustics report: ‘Infrasound Levels Near Windfarms and in Other Environments’”