Subsidy Sam set to knock wind out of Tommy’s sails 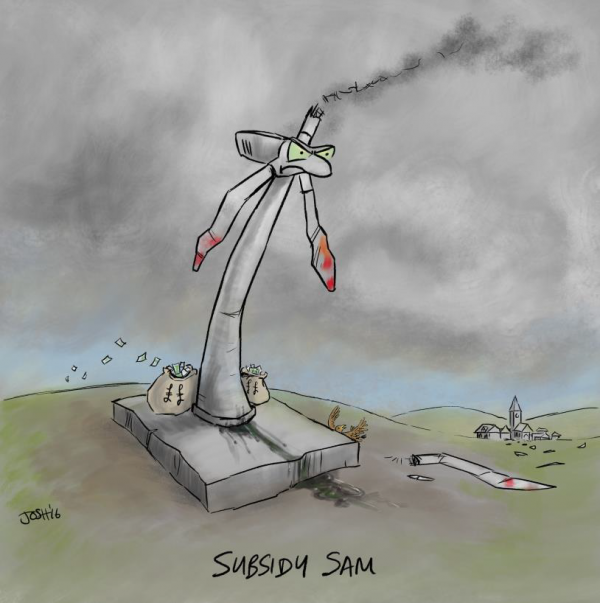 Tommy the Turbine has a fictional rival to liven up the debate about windfarms.

A leading Highland objector has created “Subsidy Sam” to challenge a character used by the industry.

Beauly-based Lyndsey Ward, who today publishes her story online, claims youngsters have been “indoctrinated” by a host of school activities including visits to windfarms. “Tommy the Turbine” is already online and been used in schools in Ireland.

She said: “What’s been happening is similar to what fast food and fizzy drink makers did previously – sponsoring school sports equipment and leaving us with an obesity epidemic.

“The wind industry goes into schools in Scotland and never is the other side of the story told. Youngsters are being brainwashed into thinking we’d be doomed without windfarms.

“It’s a cynical ploy to keep the subsidies flowing into the next generation.”

She said: “They never tell children how turbines chop up birds, or about the thousands of trees felled to make way for windfarms, or how often blades fly off, or tell children in poor households why their parents can’t afford their energy bills.”

Mrs Ward’s short story is illustrated by St Andrews–based cartoonist “Josh,” who said: “I hate what’s happening to Scotland with the proliferation of turbines killing rare birds and ruining the landscape.”
Neither the SNP nor the trade body Scottish Renewables would comment on “Subsidy Sam”.

The only surviving Highland school turbine is at Scoraig Primary where it is “the primary source of power.”