Straight talk about carbon and climate

Maine’s Wind Power Goals: Is the Medicine Worse than the Illness?

In 1988 Stephen Rice wrote “Some Doctors Make You Sick: The Scandal of Medical Incompetence.” In the book, Rice explored the concept of iatrogenic illness, which roughly translates to “the cure is worse than the disease.”

We all want clean energy that is useful, necessary, sustainable and affordable. But that does not dictate an “all of the above” so much as an “all of the sensible” approach. This week’s update explains one more reason why Maine’s wind power goals are iatrogenic: a prescription possibly worse than the illness it seeks to cure.

In 2008 the Maine Legislature made it the state’s policy to aggressively pursue a staggering amount (2700 megawatts) of grid-scale wind power. On a typical day, our entire state uses less than 1500 megawatts. The law eliminated barriers to industrial wind development, and even forced regulators to approve projects simply because the applicants can show how they are fulfilling the statutory goals.

Now that we know how ineffective and unnecessary all that wind generation would be, we have submitted legislation asking the Legislature to reform the policy that is so adversely impacting Maine’s people, environment, and economy.

In our February 18 update we showed you how a Maine wind project can net 29 cents per kilowatt hour when unsuspecting ratepayers and taxpayers think the price is only five cents. Click here if you missed that unsettling update. In it we illustrated one of the reasons Friends of Maine’s Mountains seeks to end the most-favored treatment for wind power: because it is unaffordable.

This week we discuss another of the dubious rationales that were used to justify Maine’s law granting statutory favor for wind power: to fight climate change.

When it comes to protecting the environment, Maine is a leader. Our electricity generation is third cleanest of the 50 states, behind Vermont (nuclear & hydro) and Idaho (hydro).

Why is Maine so clean? 99% of Maine electricity generation comes from clean sources other than oil and coal. And with 87% of the Pine Tree State covered in carbon-eating forests, Maine cleans up lots of CO2 from away.

The 2008 Wind Act made it state policy to pursue 2700 megawatts of wind power, potentially developing 300 miles of mountaintops with 1000 or more wind turbines the size of 40-story skyscrapers. 300 miles of ridges

The authors of the Wind Act came up with some plausible-sounding reasons. They claimed we needed wind power to:

1. Get off oil. (Maine electricity generation is already less than 1% oil-fired)

2. Become energy independent. (Maine’s generation capacity is more than triple its demand, and 1000 Maine turbines will add no more than 5% extra electricity to our grid)

At the end of this update, you will ask yourself whether we ought to be spending billions of dollars building massive industrial wind complexes in Maine’s signature wild places, all to derive such negligible benefits.

Perspective: How Much CO2 Can be Avoided by 1000 Maine Wind Turbines?

Last year the Legislature commissioned an assessment of our progress toward the statutory wind goal. Among the sobering findings, we learned that if Maine builds the thousands of mountaintop turbines necessary for 2700 megawatts, we would reduce New England CO2 emissions by at best only 1.5%. In the report, former Maine public advocate Steve Ward wrote:

Thus, if Maine were to achieve the wind energy goal for 2015 of 2,000 MW and if those turbines actually operated with a capacity factor of 33% we etimate that those wind turbines would cause an annual greenhouse gas reduction of 2,688,444 tons that otherwise would have been emitted in New England, primarily by natural gas-fired generators.

Mr. Ward calculated that if Maine installs 2000 MW of wind power operating at (a very optimistic) 33% CF, then those turbines would likely cause an annual 2.7 million metric ton (MMT) reduction in C02 emissions from New England electricity plants. While Mr. Ward’s assumed 33% turbine performance rate was high (in 2012 Maine wind projects collectively reported below 25% capacity factor to the Federal Energy Regulatory Commission), and while he did not account for increased emissions due to inefficient ramping in thermal generators which would be used to “balance” the wind power’s intermittency, nonetheless we will for the purposes of this exercise assume that 2.7 MMT is a fair and conservative projection for 2700 megawatts of wind power.

2.7 million tons of anything sounds like a lot of weight. Imagine 1.3 million Ford F-150s
falling out of the sky onto each Maine man, woman and child! Alas C02 is a gas, not a truck, so let’s put that tonnage into perspective.

Using Mr. Ward’s calculations, and correcting his generous capacity factor presumptions, if 1000 Maine wind turbines can reduce C02 by 2.7 MMT, those 2700 MW of wind would reduce New England C02 emissions from all sources by only 1.5%.

For scale, this is four and a half feet on a football field.

For scale, this is 1.8 inches on a football field.

For scale, this is a blade of grass on a football field. 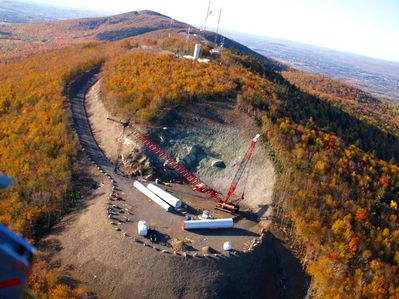 The statutory wind goals were enacted with good intentions. But the prescription is clearly worse than the illness. The environmental and economic impacts to Maine are unsustainable when compared to the tiny, nearly immeasurable benefits. The law was enacted in Augusta without any recorded votes and without debate. With new knowledge in hand, it is time for the Legislature to remove the statutory language that essentially mandates more and more industrial wind complexes in our quality wild places, described by the Brookings Institute as “our greatest asset.”

We don’t have to ruin our mountains for a trace amount of CO2. If carbon reduction is our goal, we have better ways to achieve it: fuel switching, electrification, efficiency, conservation, etc.

Please contact your legislators today. Click here to find your legislators’ contact information. Feel free to forward this update and to urge them to adopt our sensible reforms.