How does the electrical grid work?

Very simply, supply must be continuously matched to demand. There is no large-scale storage of electricity on the grid.

What is the difference between base and peak load?

Load is the amount of power in the electrical grid.

Base load is the level that it typically does not go below, that is, the basic amount of electricity that is always required.

Peak load is the daily fluctuation of electricity use. It is usually lowest in the wee hours of the morning and highest in the early evening. It also varies seasonally. 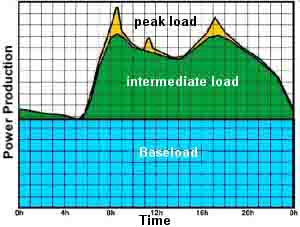 Are base and peak loads provided differently?

Base load is typically provided by large coal-fired and nuclear power stations. They may take days to fire up, and their output does not vary.

Peak load, the variable part of the electrical supply and demand, is provided by more responsive and smaller plants whose output can be quickly ramped up and down or that can even be quickly turned on and off.

How does wind power affect base load?

Wind power has no effect on base load. However, since base load providers can not be ramped down, if wind turbines produce power when there is no or little peak load, the extra electricity has to be dumped.

Unlike conventional power plants, wind turbines cannot be “dispatched” in response to fluctuating demand needs. Wind turbines respond only to the wind, so their contribution to supply is essentially random. The wind may be high when demand is low, or vice versa. If there is sufficient demand when the wind rises, wind power may reduce the need for other plants to supply power. On the other hand, if the wind drops when there is still demand, other plants must quickly jump in to cover the loss. The more frequent ramping or switching of these other plants raises costs and may lower their efficiency and increase their emissions.

What are the sources of electricity in the US?

Why don’t we use more hydro power?

Although it was once considered to be a clean source of energy, large-scale hydro is now known to be ecologically destructive to a degree that can not justify new development. As alternative sources are able to replace them, many dams are torn down to restore the health of rivers and the life in and around them.

National Wind Watch is working to publicize the environmental impacts of large-scale wind power to avoid the same mistake being made again.

How much of our energy use is electrical?

Electrical energy is currently 39% of all energy used in the US.

How much of our electricity use is residential?

Residential use currently accounts for 35% of the electricity consumed in the US, or 14% of all energy.

How is generating electricity from the wind different from conventional generation?

In “conventional,” or thermal, generation, a fuel is burned (or atoms split) to heat water into steam (or to blow air) to turn the generator (i.e., the turbine). It takes time (minutes to days, depending on design) to get the plant going, so if it is providing peak power it is not turned off as the demand temporarily drops. It continues to burn fuel, either idling or redirecting the steam away from the turbine. In this way, it can be instantly switched back to generation mode when demand rises again.

In wind-powered generation, it is the wind that turns the generator, via the large wing-like blades. It is also the wind, rather than the grid operator, that determines when it produces power and how much.

Why is the intermittency of wind an important issue?

The electrical grid must continuously balance supply and demand to keep the “pressure” (i.e., voltage) in the system constant. As demand draws off more power, supply must be increased. As demand slows, the supply must be decreased. Because wind turbines respond to the wind rather than the grid dispatchers, they must be treated like variable demand rather than reliable supply.

The grid has to adjust supply in response to the fluctuations of wind power as well as those of demand.

How is the grid affected by commercial wind power?

Is there a difference between intermittency and variability?

Variability implies a a fluctuation around a certain baseline, such as the variation of electricity demand through the day. Intermittency implies something that frequently starts and stops.

Wind power is both intermittent and variable.

How much carbon dioxide does a wind turbine save?

There is no evidence that wind turbines save any carbon dioxide at all. The preferred source that wind power may replace on the grid is hydro power, which is already carbon dioxide free. If a conventional source is replaced, it may simply be ramped down or switched from generation to standby, in which mode it still burns fuel and emits carbon dioxide. Ramping and more frequent restarting cause thermal generators to run less efficiently and to emit more carbon dioxide and other material than they might otherwise.

What is net metering?

Net metering allows your electricity meter to run “backwards.” This allows a homeowner to install photovoltaic cells, a small wind turbine, or a microhydro generator to supplement the power from the grid. When the home system produces more power than is being used, the extra power flows into the grid and turns the meter in reverse, in effect selling power back to the utility.

If Denmark and Germany have successful wind energy programs, why can’t we?

The success of wind energy in Denmark and Germany is debatable. Neither country has reduced their overall use of other fuels or their greenhouse gas emissions because of wind power.

Doesn’t Denmark get 20% of its electricity from wind?

No. Wind turbines generate the amount of energy equivalent to 20% of the electricity used in Denmark. Most of it, however, is sent to Norway and Sweden, where it is used by pumped hydro stations.

Many of the wind power facilities in Denmark are community owned, so as long as they are generating money it is harder for the owners to believe that they are not actually contributing energy.

Even so, Danish groups have arisen to expose the failures and serious negative impacts of industrial wind power. Onshore development of wind power has essentially halted over the past few years. Denmark has not added new wind energy capacity since 2003.

Why do so many environmental groups support wind energy?

They have a misdirected faith in its supposed benefits. It is understandably comforting to believe that there is a benign source of electricity that will help to remedy our energy problems. And since most people have not been personally threatened by wind power development, they have little compulsion to question their faith. The belief is reinforced as governments are compelled to reduce fuel imports or carbon emissions. The huge size of industrial wind turbines makes them powerful symbols. Environmental groups thus find themselves in the unusual position of supporting the government and industry and helping to whitewash over the negative impacts.