The electrical grid is the vast and complex network that connects the generators and users of electricity.

Because electricity can not be easily stored on a large scale, the grid is managed so that the amount of electrical power entering the grid exactly matches the amount being used.

It can be visualized as a pool in which the water level must be kept at a constant level while a varying number of people are siphoning water out at varying speeds with different-sized hoses. 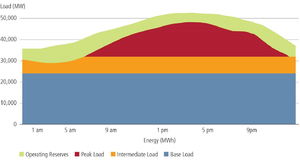 The amount of generation necessary at any time is called the load. Base load is the level that demand usually does not drop below, and it varies seasonally. Intermediate load is required while people are awake and using more electricity. And peak loads are spikes in use, particularly when people get up and in the evening. Daily fluctuations in load are fairly predictable, and generation is dispatched accordingly.

In addition, reserve plants are kept operating – burning fuel but not generating electricity – so that backup power is continuously available, ready to take over in case of the sudden loss of another plant or kick in to meet an unexpected surge in use. This operating reserve makes it possible to readily integrate a small amount of variable nondispatchable generators such as wind turbines into a grid, but using them for that purpose obviously reduces their availability for responding to a catastrophic loss of other generators or an urgent need for power.

Nuclear and large coal plants are used to provide base load, because they can not be rapidly turned on or off. In fact, it may take days to start up such plants. Their production of electricity, however, can be ramped down by diverting the steam away from the generator turbines, but this does not reduce the amount of fuel consumed.

Other dispatchable sources can also provide base – as well as intermediate and peak – load, but nondispatchable sources such as wind can not. Wind energy is produced in response to the wind instead of actual demand on the grid. It thus acts like “negative demand”, and the grid must adjust other sources to balance the fluctuating and largely unpredictable infeed from wind turbines as well as the more predictable user demand.[1][2][3] This causes the grid to operate less efficiently, including causing fossil fuel plants to burn more fuel – and emit more CO₂ etc. – in relation to the electricity produced.[4] It is analogous to stop-and-go city versus highway driving.