The Waterloo area is a mixed farming community in the Mid North of South Australia where a significant proportion of the population are long term farming families involved with Primary Production and related support industries. Retirees, pensioners, working families, tree changers, lifestyle block owners and weekenders also make up the local community. There are approximately 75 houses within 5 km of the turbines and approximately 230 houses within 10 km.

The Waterloo wind development has been the subject of a large number of complaints from residents up to 10 km from the turbines. The majority of complaints relate to NOISE, VIBRATION, SLEEP DEPRIVATION and HEALTH EFFECTS. Four homes have been abandoned and many residents have to regularly “get away” in order to get adequate sleep and recover.

The April 2012 Waterloo Survey graphs below show the distribution of sleep affected households relative to their distance to the nearest turbine. (93 respondents from 230 delivered surveys 40% response rate.) 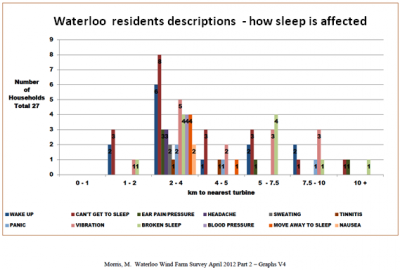 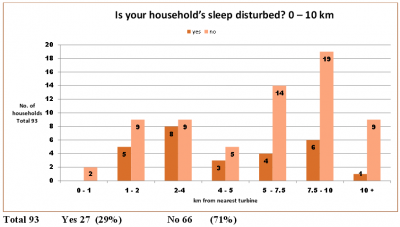 A case series of reports from residents living near the Waterloo wind development in South Australia is being prepared. These residents have noted a definite negative change in their quality of life, sleep, health, wellbeing or symptoms since the wind turbines began operating in comparison with periods when the wind turbines are not operating or when the residents are away from the area.

The following preliminary results about households and residents have been compiled from two written surveys and personal interviews of affected residents and from Noise Diaries completed by the residents for the South Australian EPA. 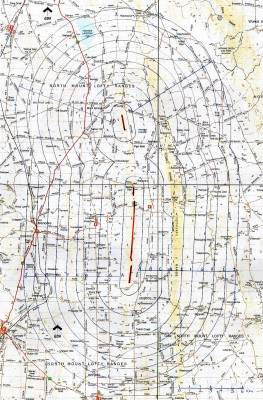