Infrasound and low-frequency noise – does it affect human health?

On the Engineers Ireland website, a search for ‘infrasound’ or ‘low-frequency noise’ yields zero results. A search on ‘noise’, however, yields 44 results. Why is it that infrasound and low frequency noise (ILFN) is still such a taboo subject? While it is improbable that this particular question will be answered here, an exposé of ILFN will be provided with a brief historical account of how and why ILFN was ultimately deemed irrelevant for human health concerns.

Infrasound and low-frequency noise (ILFN) are airborne pressure waves that occur at frequencies ≤ 200 Hz. These may, or may not, be felt or heard by human beings. In order to clarify concepts, in this report the following definitions are used:

In the early part of the 20th century, Harvey Fletcher of the Western Electrics Laboratories of AT&T, was tasked with improving the quality of reception in the telephone. To generate the sounds in a telephone earpiece, he used an AC voltage and had some of his colleagues rate the loudness of the sound received compared to the quietest tone heard.

Initially he called this metric a ‘sensation unit’ but later, to commemorate their founder Alexander Graham Bell, they renamed it the ‘Bel’. A tenth of a Bel became known as the deciBel, corrupted to decibel, which has stuck with the scientific community to this day.

Fletcher-Munson curves and the dBA metric

To address the problem of industrial noise in the early 20th century, measurement was essential, as was a metric. At that time, researchers were critically aware that the readings on a sound level meter did not represent how loud or intense the sound was with respect to the subject’s perception of hearing.

From a biomedical perspective, this concept of perception is subjective, and changes between individuals and over timescales from minutes to decades. These serious constraints notwithstanding, it was acknowledged that some average measure of loudness would have some value for medicine and public health.

Harvey continued his research with Wilden Munsen, one of his team, by varying the frequency of the electricity to give pure tones, to which it is understood 23 of his colleagues listened to different levels of loudness, again through a simple telephone earpiece. (It is assumed they all had good hearing). They were then asked to score the sounds for equal loudness to that generated by an alternating current at 1000 cycles per second.

The level of the sound of course depended on the voltage applied, which could be measured. It is important to note two significant constraints here: The sounds were ‘pure’ sine waves, which are not common in nature, and the headphones enclosed the ear of the subject. This is a very unnatural way to listen to a very unnatural sound.

The numerical results of this study are known as the Fletcher-Munsen Curves (Fig 1). The (logarithmic) units of these curves are known as ‘phons’ and the inverse of the 40 phon curve forms the basis of the A-frequency weighting scale used everywhere today (Fig 2).

The minimum pressure required for humans to perceive sound at 1000 Hz is considered to be 20 micropascal, or an intensity of 10−12 watts per square meter. This corresponds to 0 phon on Figure 1, and 0 dBA in Figure 2. For all its shortcomings, the A-weighting has endured for decades and has become the de facto standard for environmental noise measurement. But is the A-weighting sufficient for all circumstances?

The answer is an emphatic ‘No’. It relates to the perception of loudness, which heavily discounts all frequencies below 1000 Hz and ends at 20 Hz. This 20-Hz limit was a consequence of equipment limitations of the 1920s and 30s, but has remained as the lower limit of human hearing to this day. The assumption that harm from excessive noise exposure is directly related to the perception of loudness has also remained to this day.

Observe in Fig 2 that, at 10 Hz, there is a 70-dB difference between what is measured and what is, de facto, present in the environment. In other words, three-and-a-half orders of magnitude of energy are discounted at this frequency.

The implications for public health are considerable, and within this line of reasoning, any event below 20 Hz becomes of no consequence whatsoever – and more so because it is not implicated in the classical effects of excessive noise exposure: hearing loss.

There are also issues of time and frequency resolution. Acoustic phenomena are time-varying events. A 10-minute average of acoustic events can hide more than it reveals. Similarly, segmenting frequencies into octave or 1/3-octave bands for analysis can also hide much that needs to be seen.

Today, affordable and highly portable equipment can record acoustical environments, and allow for post-analysis in sub-second time increments and 1/36-octave resolution. Waveform analysis from the sound file directly can achieve an even better resolution.

The following results, recently obtained in field-studies conducted in Ireland (July-November 2017), show why such resolution is needed to understand ILFN-rich environments. The classical metric (in dBA, 10-min averages and 1/3-octave bands) will be contrasted with what is needed for human health-related concerns (in dB with no frequency weighting, and resolutions of 0.2s and 1/36-octave bands), and not merely compliance with regulations.

Equipment and methods
Acoustical environments were recorded with a SAM Scribe FS recording system, a 2-channel recorder with sampling rates up to 44.1 kHz at 16-bit resolution and linear response down to almost 0.1 Hz [4-6]. Recordings were saved as uncompressed WAV files including the 1000 Hz/94 dB reference calibration tone prior to and after measurements. Windshields were placed on both microphones during the entire measurement sessions. Microphones were attached to tripods at approximately 1.5 m above the ground.

Location
Five homes located around the same industrial wind turbine (IWT) development have been the object of study. The data presented here refers to Home 1 (Fig 3). Table 1 shows the dates and times of all recordings that have been made to date in this home. The recordings selected for analysis and presentation herein were chosen on their educational value.

Table 1: Dates and times of recordings 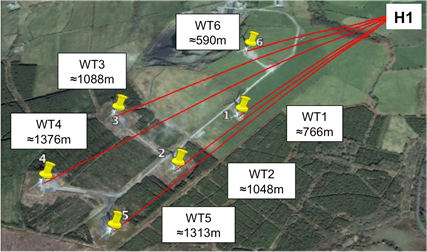 Fig 3: Reconstruction using a Google Earth image and showing the relative position of Home 1 and each of the six industrial wind turbines

The values obtained for the sound pressure level and 1/3-octave bands are seen in Figs 4 and 5. The overall dBA metric (red bars labelled ‘Tot’) reflects the sound that humans would hear if they were present in this environment.

The sound pressure level in dBLin metric (grey bars labelled ‘Tot’) reflect the amount of acoustic energy to which humans are concomitantly exposed. The growing discrepancy between the two can be seen as the frequency falls below 1000 Hz. 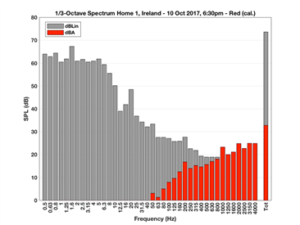 Fig 4: Data covers a 10-minute interval analysed between 0.5-4000 Hz, in 1/3-octave bands, as recorded in Home 1, on 10 October 2017, at 18:30 (red microphone, i.e. inside child’s bedroom-2). The red bars are A-weighted values, while the gray bars indicate the acoustic energy that is, de facto present, in dBLin. In this environment, the human being would perceive through the ear an overall A-weighted pressure-level of approximately 34 dBA (Tot – red bar), while being concomitantly exposed to an overall acoustic pressure-level of approximately 74 dBLin (Tot – grey bar). 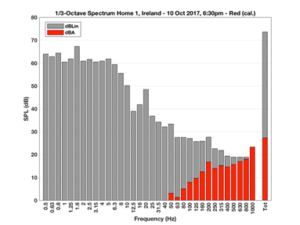 Fig 5: Data covers a 10-minute interval analysed between 0.5-1000 Hz, in 1/3-octave bands, as recorded in Home 1, on 10 October 2017, at 18:30 (red microphone, i.e. inside child’s bedroom-2). The red bars are A-weighted values, while the gray bars indicate the acoustic energy that is, de facto present, in dBLin. In this environment, the human being would perceive through the ear an overall A-weighted pressure-level of approximately 26 dBA (Tot – red bar), while being simultaneously exposed to an overall acoustic pressure-level of approximately 74 dBLin (Tot – grey bar).

Figure 6 shows the sonogram corresponding to the same 10-min period. This visual representation of time- and frequency-varying acoustic events provides much more information than the classical approach (Figs 4 and 5).

Here, short-term events can be seen in the region of 20-50 Hz (Fig 6). Tonal components can be seen at 10 Hz and 20 Hz that are not steady in amplitude and may be amplitude modulated, i.e., where the amplitude of the pressure is not continuous and varies periodically with time. The 10-minute averages, used in almost all legislation, hide these variations and are representative only of tonal components that are essentially unvarying over the 10-minute period in question. 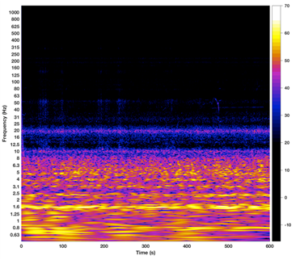 Fig 6: Sonogram that covers the same 10-minute interval (600 s) as in Figs 4 and 5 showing time-varying features. The colour-coded bar on the right indicates sound pressure level values in dB Linear (no weighting). The horizontal line seen at 20 Hz is not a continuous tone because over the 600 s, its pressure level (colour-coded data) varies. A strong (yellow) acoustic phenomenon can be seen to exist at 1.6 Hz and also at 0.8 Hz. Home 1: No weighting, 1/36 octave bands (0.5-1000 Hz), 0.2 s average – Red Channel

The periodogram (Fig 7) over the same 10 minutes shows that there are distinct tonal components that form a harmonic series. When IWTs are the source of ILFN, the rotating blades generate repeated pressure waves as each blade replaces the previous one at any position.

A harmonic series is formed with the ‘blade pass frequency’ as the fundamental frequency (0.8 Hz here). These harmonics constitute what is called the wind turbine signature [7], which is impossible to identify using the classical dBA, 1/3-octave, 10-minute averaging methodology. 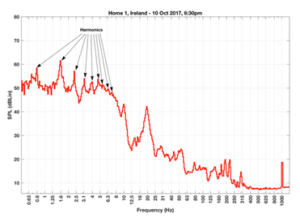 Fig 7: Periodogram covering the same 10-minute interval (600 s) as in Figs 4-6, and analyzed between 0.5-1250 Hz. The blade pass frequency of the IWT is 0.8 Hz. Harmonics of this fundamental frequency are shown in the figure. Each frequency band composing the harmonic series has a well-defined peak, e.g., the horizontal line seen in Fig 7 at 20 Hz is represented here as a peak at 20 Hz.

Health concerns associated with excessive exposure to ILFN in the workplace have been around since the industrial boom in the 1960s [8]. In recent years, however, residential neighbourhoods have also begun to be flooded with ILFN [9-14]. The family living in Home 1, for example, has abandoned their residence due to severe health deterioration in all family members.

Accredited acousticians cannot ascertain compliance levels for ILFN because there are none – the vast majority of regulations worldwide do not cover this part of the acoustic spectrum. Nevertheless, public health officials and agencies should fulfil their job descriptions by becoming aware of the limitations of current noise guidelines and regulations.

Alternatives exist to gather the acoustic information relevant to the protection of human populations, in both occupational and residential settings. Noise regulations and guidelines need urgent updating in order to appropriately reflect ILFN levels that are dangerous to human health.