Current generations of Industrial Wind Turbines (IWTs) have changed in many ways from those initially installed in Europe in the late 20th century. The generating power of modern IWTs is many times that of earlier generations. Current 1.5, 2.5, and 3MW turbines dwarf the 400 and 600KW turbines most Europeans and Americans encountered in the past. In addition to larger generators, current turbines have much longer blade lengths and are positioned much higher off the ground, often on ridgelines, to better capture the greater wind forces required to turn them. Many jurisdictions have already been identified as hosts for new IWT installations, with plans for tens of thousands of ever larger IWTs worldwide in the decade ahead.

Improvements in turbine design and more efficient blade profiles and materials have resulted in less sound output per unit of energy produced compared to older turbines, but current turbines, being much larger, still produce considerable amounts of sound energy. Unfortunately, the factors that have resulted in less noise per unit energy have been used to justify closer placement of turbines to human residences. It is not unheard of in the UK and North America to find turbines sited within 250m of homes. With the increasing number of installations close to housing, many anecdotal reports from around the world began accumulating early in the last decade of adverse health effects of remarkable similarity from many differing locales worldwide.

In Maine, the towns of Mars Hill and Vinalhaven underwent the installation of IWTs in 2009. These towns were the source of multiple complaints of adverse health effects of IWTs that were reported in the local media. Over the last 6 years, I developed an interest in and researched issues relating to the human response to noise arising from Industrial Wind Turbines, beginning with the complaints heard from Mars Hill (about 90 miles from where I live), and the announced objectives of the then-Baldacci Administration to install 3000MW of IWT generation within Maine by 2020. If the problems at Mars Hill were real and not understood or acknowledged by the Maine DEP, with steps taken to prevent adverse effects that may be occurring, this project by implication risked creating over a hundred more Mars Hill type situations state-wide.

Jeffery Aramini, Christopher Hanning and I published a study in the journal Noise and Health in late 2012 (Effects of Industrial Wind Turbine Noise on Sleep And Health, Noise & Health, September-October 2012, Volume 14:60, 237-43).This was the first published study of adverse health effects associated with IWT’s that used a control group and well accepted, previously validated, medical investigative tools targeted at the most common, and arguably most serious, of the commonly reported adverse health effects: sleep disorders and deteriorated mental health.

Subjects living within 375-1400m (n=38, the ‘near’ group) were compared with those living 3.3-6.6km from IWTs (n=41, the ‘far’ group). Those living within 1.4km had significantly worse sleep (assessed by Pittsburgh Sleep Quality Index (PSQI)), were significantly sleepier during the day (assessed by Epworth Sleep Scale (ESS)) and had significantly worse SF-36v2 Mental Component Scores. Significant dose response relationships between PSQI, ESS, SF36 Mental Component Score and distance to nearest IWT were identified after controlling for gender, age and household clustering. There were no significant differences between the two sites.

There was a significant increase in use of prescribed psychotropic medications for those living within 375-1400 meters compared to those living farther away. Nine of 38 individuals in the near group were newly diagnosed with depression or anxiety disorders and received new prescriptions for psychotropic medications compared to 3 out of 41 in the ‘far’ group.

Figures 1, 2 and 3 summarize the findings from the validated questionnaires. Additional symptoms of note are provided in the table. Please refer to the full study in Noise &Health for further details and discussion. 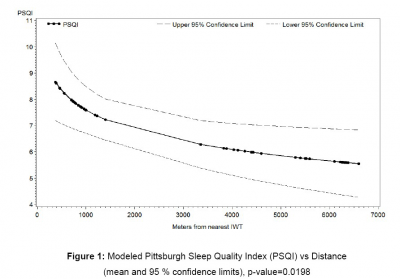 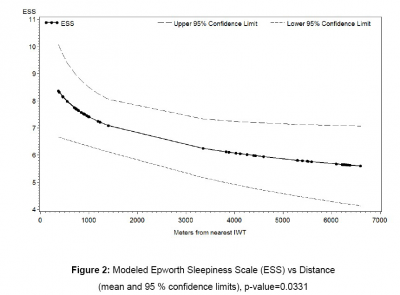 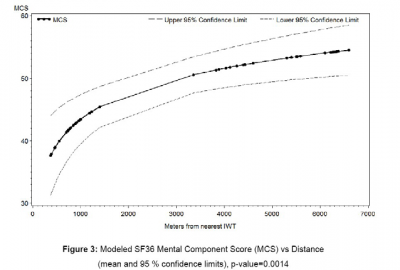 Based on our Mars Hill/Vinalhaven Study, it is clear that there is a high probability of significant adverse health effects for residents whose homes are located within 1400 meters (.87 miles) of industrial turbines. The health risks include:

To date, there is not a single study or any peer reviewed literature representing original work that finds that wind turbine noise is harmless to human health. To the contrary, there is an emerging body of literature informing us that under certain circumstances wind turbine noise can have substantial adverse health impacts on a community. Illogically, some people refuse to apply the known science on the adverse effects of noise and sleep loss to the issue of IWT siting.

How did we get here?

Preconstruction noise modeling is a key part of the planning and submission process. Acoustic engineering firms are typically consulted, and they take the known maximal noise emissions from a particular IWT model to be used, add a safety factor (in theory) of a few decibels, and take account of such factors as topography, ground cover, and ambient nighttime noise levels. These various factors are plugged into software programs; maps of sound contours are developed that show expected noise levels at certain reception sites (typically homes).

If any of the variables plugged into the programs are incorrect or based upon a faulty understanding of human physiology, the outcome may end up being unsatisfactory to the point of being disastrous for the affected residents. Incomplete or erroneous understanding of human physiology frequently informs the variables non-medical people use to arrive at conclusions as to whether people will have their health adversely affected by IWT installation. Let us review a few of these.

The intended use of an ‘equal loudness contour graph’ is to demonstrate the sound pressure levels (SPL) at which a tone of a particular frequency becomes audible. It is the graph that is the basis for the widely held belief that at the sound pressure levels under discussion, humans are simply incapable of hearing noise that is below 20Hz at SPLs below 79. This belief informs essentially all the preconstruction sound modeling the industry has used to place turbines. It is wrong – for several reasons. To begin with, the equal loudness contour graph was created using pure sinusoidal tones. It is known physiology, however, that complex tones are audible at lower sound pressure levels than those represented on such a graph, by up to 6 to 7 dBA.

Additionally, it is often overlooked that every point on every line of an equal loudness contour graph represents an average of multiple listeners, with a standard deviation of 6 dB. A significant proportion of people may in fact hear sub 20Hz noise at SPLs significantly lower than the commonly used 79 dB.

Wind turbine noise is complex. It is broadband, and has a pulsatile nature to it, with a periodicity depending on rotor speed. The preponderance of noise is at the lower frequencies.

Instruments that are used in traditional studies are unable to accurately measure short duration pulsations, leading to measurement data that understate both the peak SPL levels and average levels. This error can be as much as 20-30dB. Additionally, environmental regulations allow the averaging of noise peaks; this renders them unsuitable for measuring noise with the complex characteristics of IWTs. Unfortunately, preconstruction sound modeling utilizes targets meant to be confirmed with these same, not optimally sensitive instruments. Even more recently, microbarometers have been employed and have demonstrated detectability of IWT activity at downwind distances of 10km (personal communication Richard R. James, INCE).

GE 1.5MW turbines are in use at both Mars Hill and Vinalhaven. Most modern turbines of any given size have similar sound profiles, regardless of manufacturer. Larger turbines will have greater lower frequency output, but because dBA weighted measurements are stipulated in siting/DEP regulations, the increased lower frequency noise output (which is clinically important) is hidden from consideration in preconstruction sound modeling, at this point in time, in most jurisdictions. Reliance upon dBA instead of unweighted sound recording or less weighted dBC is another problem with current IWT siting protocols. The difference between heavily weighted dBA and less weighted dBC is visible in figure 4. 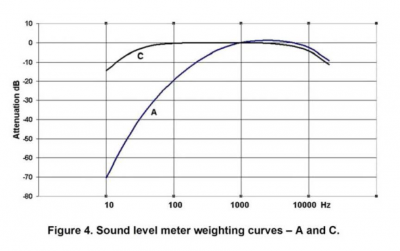 It is conjectural in the case of IWTs, but the pulsatile nature of IWT noise may recruit the speech or rhythm parts of our brain. Additionally, it has a preponderance of low frequencies, which we are hard wired to pay attention to, as most threats to life and limb during human evolution carried with them ominous low frequency components.

What distance is safe? It depends on the terrain, the climate, the size of the project and the turbines themselves. Accurate preconstruction modeling with safe targets in mind is critical, and must be informed by an understanding of human physiology.

Advocates of siting IWTs close to populations are fond of referring to variations on a concept some of them refer to as ‘nocebo’ (a psychologically mediated effect analogous to a psychosomatic illness/response), the opposite of placebo. In a ‘nocebo’ situation, people suffer ill health from IWTs because they have been led to believe that IWTs are harmful, not because of anything related to the IWTs themselves. These advocates acknowledge that people may be ‘annoyed’ by the noise, but that ‘annoyance’ is not a disease. They seize upon the use of the term ‘annoy’ from early European papers on adverse effects of IWTs, but attribute to it the colloquial American definition of a disturbance without real consequence; this is a perversion of the original intent of the word in the original papers (personal communication, Eja Pedersen, PhD).

A physician using the diagnosis of ‘nocebo’ must ensure that it be done subsequent to a process of thoroughly excluding the possibility of any pathophysiological pathways that are plausible, more likely, or more important because of serious downstream implications. To jump to a diagnosis of nocebo without considering the above is, frankly, malpractice. Most of the people advocating the ‘nocebo’ concept as being at play here are not medical doctors, and carry no responsibility to individual patients.

In summary, in many IWT projects, the preconstruction sound modeling has underestimated the eventual real world sound levels those turbine projects eventually produce. When coupled with the underappreciated human physiological responses to the type of noise large turbines produce (adverse sleep and mental health effects), this has had real world consequences for those living near them. The relationship of noise to sleep disturbances is established. The biological plausibility of sleep disturbances resulting in ill health is settled science. Chronic noise exposure leads to chronic sleep disturbance in many of those exposed, often resulting in ill health. Observed adverse human effects must trump preconstruction sound modeling; changes in practice must occur when there are errors. It’s all about distance when siting decisions are made.