Some observers suggest that the United States can source 100 percent of its electricity from renewable sources by the year 2050, and can easily replace not only coal but also nuclear power plants and even natural gas plants with renewable energy alone. The most frequently cited analysis in support of this proposition comes from Stanford University’s Mark Jacobson, who has published a series of papers that purport to establish the feasibility of 100 percent renewable power. This is the kind of work that generates enthusiastic headlines and news stories, and becomes a rote talking point for environmental advocacy and special interest lobbies. A closer look shows the superficiality of this claim. Twenty-one prominent academic energy experts, all of whom generally support renewable energy, recently published (doi: 10.1073/pnas.1610381114) a harsh critique of Jacobson’s influential work in the Proceedings of the National Academy of Sciences, concluding that:

‘[Jacobson’s] work used invalid modeling tools, contained modeling errors, and made implausible and inadequately supported assumptions. Policy makers should treat with caution any visions of a rapid, reliable, and low-cost transition to entire energy systems that relies almost exclusively on wind, solar, and hydroelectric power. … If one reaches a new conclusion by not addressing factors considered by others, making a large set of unsupported assumptions, using simpler models that do not consider important features, and then performing an analysis that contains critical mistakes, the anomalous conclusion cannot be heralded as a new discovery. The conclusions reached by the study about the performance and cost of a system of “100% penetration of intermittent wind, water and solar for all purposes” are not supported by adequate and realistic analysis and do not provide a reliable guide to whether and at what cost such a transition might be achieved. … A policy prescription that overpromises on the benefits of relying on a narrower portfolio of technologies options could be counterproductive.’

How much more expensive and counterproductive? A recent study (doi: 10.1016/j.tej.2016.03.001) in The Electricity Journal of decarbonization through reliance on renewables in Germany, California, and Wisconsin (a state closely analogous to Minnesota in many ways) would require an investment in wind and solar power much larger than in conventional energy supplies, chiefly because the intermittency of the wind and solar power would require massive amounts of surplus capacity. A power mix in Wisconsin that retained nuclear and natural gas electricity would achieve a 15 percent greater reduction in greenhouse gas emissions than a system with 80 percent wind and solar power, and at less than half the cost. As Brick and Thernstrom note:

‘[T]he intermittency of wind and solar PV [photovoltaics] means that systems that are heavily reliant on them must be significantly larger than conventional systems; this increases their cost and capital requirements dramatically. … Efforts to promote an all- (or nearly all-) renewables future are, in effect, a commitment to building the largest electric power system possible. It might be better to start from the presumption that the smallest power system that meets our needs is likely to be the most efficient, and have the least social and environmental impact.’

The study does not attempt to estimate the land area requirements for such an extensive renewable energy system, but given the examples contained in Figure 14, they are likely to be substantial. Minnesota’s government ought to do a credible estimate of future land area needs for its renewable targets. 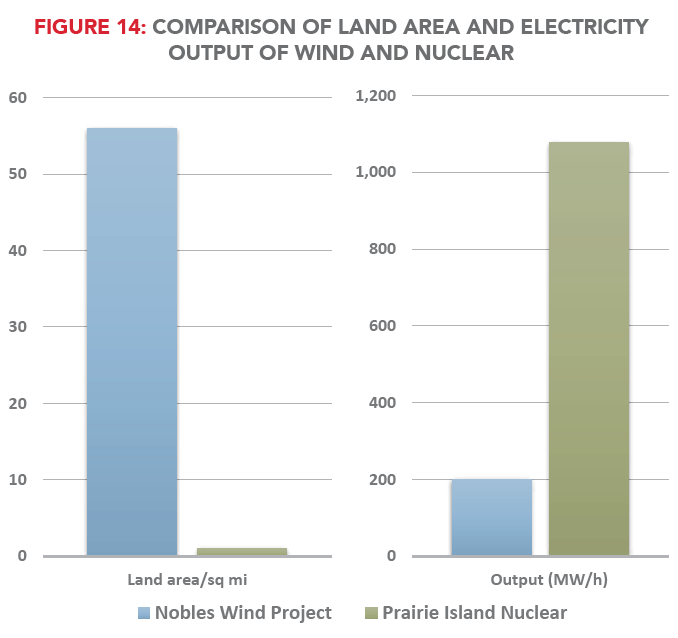