Wind energy forecasters and utility operators are presented with a variety of meteorological phenomena that can affect power production and grid operations on varying temporal and spatial scales. In the short term (zero to six hours), these features can be difficult to forecast and can result in the grid operators’ inability to handle rapid changes in wind speed and direction.

These phenomena can also produce undesirable effects on the power grid, especially issues associated with ramp events. Although there is no universal definition of a ramp, a 20% reduction in wind power occurring over a 30-minute period would qualify as a ramp event for most purposes. Previous studies have identified several meteorological features responsible for ramp-up or ramp-down events.

A variety of atmospheric conditions can produce large ramp events. The principal mechanisms responsible for most observed ramp events in regions with large distributions of existing or proposed wind farms include the following:

Frontal systems. These are density fronts or air-mass discontinuities associated with synoptic-scale systems, which is the spatial scale of high- and low-pressure systems ranging from hundreds to thousands of kilometers.

A fall/rise pressure couplet associated with these systems can result in a rapid wind-speed decrease, followed by an equally intense increase. For example, a rapid decrease in wind power production in clusters of wind farms in the Electric Reliability Council of Texas (ERCOT) footprint was caused by a complex frontal system moving across the region.

As the front approached, power generation dropped precipitously as winds temporarily relaxed. This was followed by a rapid increase in wind speeds and a corresponding ramp-up in the aggregate capacity factor (CF).

Convection-induced outflow boundaries. Thunderstorm complexes, also known as mesoscale convective systems (MCS), are prevalent throughout the Plains states and Midwest from March to September. A common feature of an MCS is the generation of strong outflow boundaries that can move in any direction and at speeds frequently exceeding 25 m/s.

The frequency of these events varies considerably from year to year and region to region. Although gust fronts often lose strength rather quickly, they can initiate additional convection and subsequent gust fronts. Because individual convective elements and clusters of storms are small-scale phenomena, the short-term evolution of their temporal and spatial characteristics is difficult to forecast. A dense network of surface-based, remote-sensing instrumentation and sophisticated modeling techniques (such as those deployed in WFIP) is necessary to improve the forecast accuracy of these events, especially in the zero- to three-hour time scale characteristic of outflow boundaries and gust fronts.

Low-level jet (LLJ). This phenomenon occurs regularly throughout the year in most regions of the U.S., including in coastal waters. The most notable LLJ occurs in the southern Great Plains, where wind speeds can exceed 25 m/s. The height of the LLJ varies between about 50 meters and 400 meters but typically occurs at about 200 meters. A special concern introduced by LLJs is the large vertical shears that can occur across the turbine rotor plane.

In Figure 1, the LLJ is quite evident at 06:00 coordinated universal time, extending down to 50 meters above ground level. As with the forecasting of MCS, instrumentation with sufficient vertical and horizontal (less than 50 km) resolution is necessary to characterize the LLJ’s spatial extent. 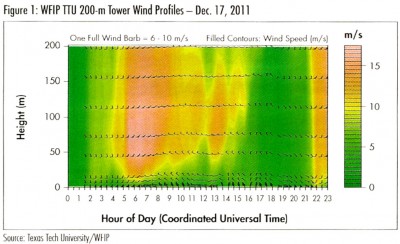 Temporal distribution of ramp events. Ramp events can occur at any time of day. However, those produced by thunderstorm complexes tend to occur during the evening hours, while those associated with the LLJ usually peak after midnight. In contrast, the coastal LLJ tends to reach its maximum during the late afternoon and early evening hours, when the land-sea temperature difference is at its greatest.

—from North American Windpower, May 2012