From One Wisconsin Farmer to Another

This is an open letter to Wisconsin farmers who are considering signing a wind lease to host turbines on your land. Before you sign, I’d like to tell you about what happened to our family farm after we signed a contract with a wind developer.

In 2002, a wind developer approached my father about signing a lease agreement to place a MET tower on our land. My father was in his 70’s at the time. The developer did a good job of befriending him and gaining his trust.

He assured my father that the project wasn’t a done deal and was a long way off. They first had to put up the MET tower to measure the wind for awhile.

He told my father that if the project went forward there would be plenty of time to decide if we wanted host turbines on our farm. There would be lots of details to work out and paperwork to sign well before the turbines would be built. The developer said my father could decide later on if he wanted to stay in the contract.

In 2003 the developer contacted us again. This time he wanted us to sign a contract to host turbines on our land. We were unsure about it, so we visited the closest wind project we knew of at the time. It was in Montfort, WI.

The Monfort project consists of 20 turbines that are about 300 feet tall and arranged in a straight line, taking up very little farmland with the turbine bases and access roads. The landowners seemed very satisfied with the turbines. But we were still unsure about making the commitment.

We were soon contacted again by the developer, and we told him we were undecided. Then he really started to put pressure on us to sign.

This was in March of 2004, a time of $1.60 corn and $1200 an acre land. It seemed worth it have to work around a couple of turbines for the extra cash. We were told the turbines would be in a straight line and only take up a little bit of land like the ones in Monfort.

And we were also told that we were the ones holding up the project. That all of our neighbors had signed, and we were the last hold-outs. It persuaded us.

What we didn’t know then was the developer was not being truthful. We were not the ‘last hold-out’ at all. In later discussions with our neighbors we found out that in fact we were the very first farmers to sign up. I have since found out this kind of falsehood is a common tactic of wind developers.

My father read through the contract. He said he thought it was ok. I briefly skimmed through it, found the language confusing, but trusted my father’s judgment. We didn’t hire lawyer to read it through with us. We didn’t feel the need to. The developer had explained what was in it.

The wind contract and easement on our farm was for 20 years. By then my dad was 75. He figured time was against him for dealing with this contract in the future so we agreed I should sign it. A few months later, my father died suddenly on Father’s Day, June 20th, 2004

After that, we didn’t hear a whole lot about the wind farm for a couple years. There was talk that the project was dead. And then in 2007 we were told the developer sold the rights to the project. A Wisconsin utility bought it.

After that everything changed. The contract I signed had an option that allowed it to be extended for an additional 10 years. The utility used it.

They weren’t going to be in a straight row. They’d be sited in the spots the developer felt were best for his needs, including in middle of fields, with access roads sometimes cutting diagonally across good farm land. Landowners could have an opinion about turbine placement but they would not have final say as to where the turbines and access roads would be placed. It was all in the contract.

Nothing was the way we thought it was going to be. We didn’t know how much land would be taken out of production by the access roads alone. And we didn’t understand how much the wind company could do to our land because of what was in the contract..

In 2008 I had the first of many disputes with the utility, and soon realized that according to the contract I had little to no say about anything. This became painfully clear to me once the actual construction phase began in 2010 and the trucks and equipment came to our farm and started tearing up the field.

The rep said that the pile was actually my neighbor’s soil, that the company was storing it on my land with plans to move it to another property.

Shortly afterwards I noticed the pile of subsoil was gone.

In November of 2011 I saw several trucks loading up a second pile of soil on my land and watched them exiting down the road. I followed them and then called the Columbia County Sheriff. Reps from the company were called out. I wanted my soil back.

A few days later the rep admitted they couldn’t give it back to me because my soil was gone. It had been taken and already dispersed on someone else’s land. I was offered 32 truck loads of soil from a stockpile they had. I was not guaranteed that the soil would be of the same quality and composition as the truck loads of soil they took from my farm.

I was informed by the lawyer for the utility that I had until April 30, 2011 to decide to take the soil. There would be no other offer. Take it or leave it.

I contacted the Public Service Commission for help. The PSC approved the terms of project and I believed the utility was violating those terms. The PSC responded by telling me they could do nothing because the issue involved a private contract between myself and the utility.

They told me my only option was to sue the utility.

My father and I both worked those fields. Watching the way they’ve been ripped apart would sicken any farmer. But what farmer has the time and money it would take to sue a Wisconsin utility?

By signing that contract I signed away the control of the family farm, and it’s the biggest regret I have ever experienced and will ever experience. I have only myself to blame for not paying close enough attention to what I was signing.

We had a peaceful community here before the developer showed up, but no more. Now it’s neighbor against neighbor, family members not speaking to one another and there is no ease in conversation like in the old days. Everyone is afraid to talk for fear the subject of the wind turbines will come up. The kind of life we enjoyed in our community is gone forever.

I spend a lot of sleepless nights wishing I could turn back the clock and apply what I’ve learned from this experience. Now corn and bean prices are up. The money from the turbines doesn’t balance out our crop loss from land taken out of production. The kind of life we enjoyed on our family farm is gone forever too.

I would not sign that contract today. As I write this, the utility is putting up the towers all around us. In a few months the turbines will be turned on and we’ll have noise and shadow flicker to deal with. If I have trouble with these things, too bad. I’ve signed away my right to complain. These are some of the many problems I knew nothing about when I signed onto the project.

If you are considering signing a wind lease, take the contract to a lawyer. Go over every detail. Find out exactly what can happen to your fields, find out all the developer will be allowed to do to your land. Go through that contract completely, and think hard before make your decision.

I can tell you from first hand experience, once you sign that contract, you will not have a chance to turn back. 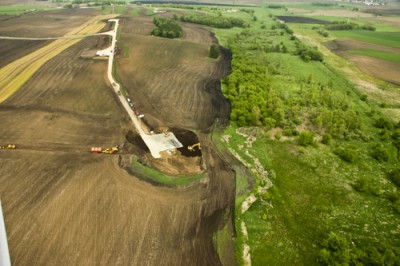 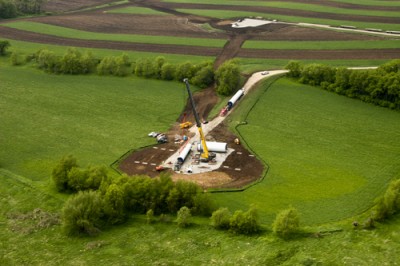 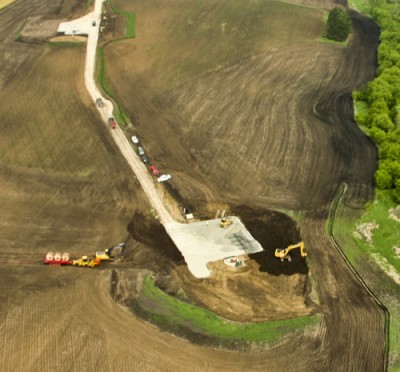 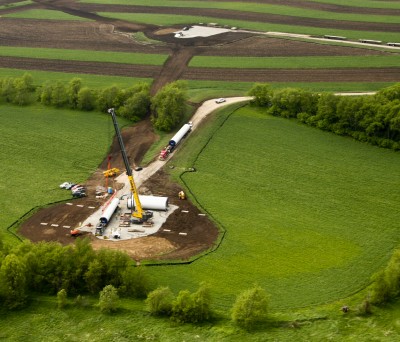