Wind generators can be relied on to produce power only about one hour in three over a year, and those productive hours are unpredictable. So conventional capacity has to be kept in reserve for the periods when the wind does not blow. These stations will be utilised less than optimally and this is a hidden cost of wind generation.

In addition to inefficient use of capital, critics have argued that wind generation has a potential cost in terms of CO₂ emissions. When the wind is blowing, priority is given to wind generation over conventional capacity. However an idling thermal plant is like a car crawling along in traffic – not doing very much but still burning fuel. This may cause thermal plant to burn more fuel per unit energy generated than would otherwise be the case.

Is there any direct evidence of reduced CO₂ savings when wind generation is high? Surprisingly, the answer to this question is yes.

The scatterplot below shows the relationship between total instantaneous CO₂ emissions and instantaneous wind generation using data from the Irish grid operator Eirgrid. The data cover the period from 1-Nov-2010 to 30-Aug-2011 at 15 minute intervals (~29,000 data points). The blue line is a local regression (loess) fit. The loess fit has span parameter 1.0. A non-parametric regression curve is shown in grey. 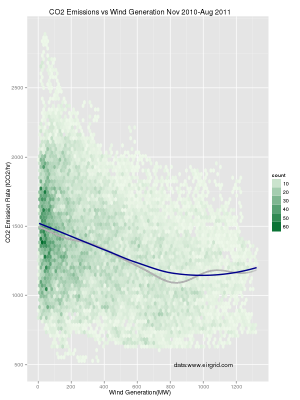 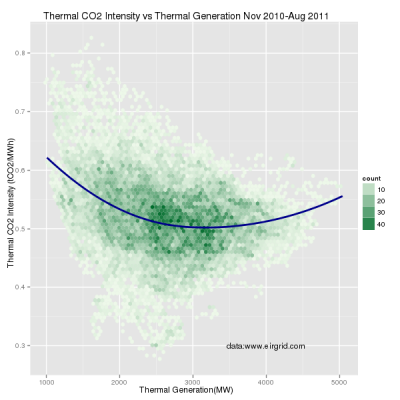 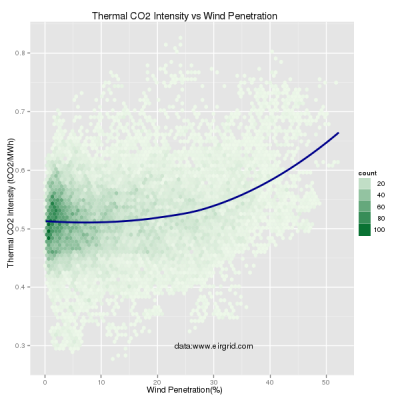