Welcome to purdah! That’s the term politicos use for the run-up to an election when parliament shuts up shop, and government dissolves into party-political electioneering.

When SAS had its much-postponed meeting with the Scottish Energy Minister last week, Mr Ewing was relishing his purdah. Officially let off his policy-making duties, with the bonus of a likely hung parliament at Westminster. After all, who knows what motley crew will form a coalition, or pull the strings in a minority government? Or what will happen to UK energy policy in the inevitable backroom dealing? A former Scottish First Minister as UK Energy Secretary perhaps?

To be fair, this did not come up at the meeting as the joke (?) was only made on the way out. We were hardly celebrating though as the Scottish Government had once again got away with sitting on its hands – and for what is turning out to be the indefinite future. The referendum froze energy policy for months, if not years. Then afterwards we were told nothing could change until the new First Minister had bedded down. Once the current general election shenanigans are over, next year’s Holyrood elections will exert another dead hand on the government of Scotland.

We had heard whispers from officers at local and national levels that an announcement of change in energy policy was coming last month. Problems like the Longannet crisis, security of supply, fuel poverty and meeting out-of-date renewable energy targets 5 years early have been attracting unprecedented levels of public criticism – not just as policy ‘challenges’ in their own right but as direct consequences of the Scottish Government’s obsession with wind energy. Even the Labour Party, aka the Shadow Energy Minister Tom Greatrex (MP for Rutherglen & Hamilton West), has realized too much wind has messed up Scotland’s electricity.

So we were invited to think change was coming with the imminent publication of the delayed Renewables Routemap (due in December 2014) and wind turbine stats (an updated SNH map had been due in August 2014). The Scottish Government could no longer ignore this momentum and its promotion of wind at the expense of everything else would shortly give way to other priorities. Apparently not.

The new Routemap has been postponed again. There is no date for its publication. The new wind turbine map won’t be available for a long time (tricky negotiations with DECC apparently plus technical ‘challenges’) although the hope is to release the raw data by the end of the year. Mr Ewing insisted on speaking to us about what the Scottish Government was trying to do about other energy issues (interconnectors, Peterhead, carbon capture & storage, connecting the islands, wave and tidal, etc) as if they constituted a coherent energy plan. Does that mean wind is no longer such a priority, or is it just the same old rhetorical avoidance which ministers have been practicing for at least two years now?

For a party wanting above all to secure independence, this is undoubtedly a shrewd move. Scottish energy policy is not a vote-winner nor a nationalist recruiting sergeant, and changing it would only draw attention to its failings as well as alienating Green support, so better to leave it be and sit out the growing tide of criticism. Expediency is all. Anyone who doubts the SNP determines all its policy via the prism of independence need only recall Mr Ewing’s decision to launch yet more studies, now also delayed, into fracking last month. Doing nothing also makes the reflex of blaming the UK government for Scotland’s energy problems look more plausible.

Mark Rowley, one of the SAS team who met Mr Ewing, proposed that a de facto policy shift was taking place. With the closure of Longannet and no plans to renew either nuclear or fossil fuel generating capacity in Scotland, the aim was no longer an energy-independent country producing enough renewable energy for its own needs. Instead Scotland exports excess wind energy to the rest of the UK when the wind blows and imports fossil fuel and nuclear generated electricity when it doesn’t. Our fate as the UK’s wind farm is sealed and we’ll see more development of industrial wind together with the infrastructure for greater interconnection. A rum scenario indeed for a party which claims to put Scotland first. Mr Ewing looked a bit uncomfortable but did not demur.

The patience of Job

Whether it’s comprehensive up-to- date stats on turbine development, or studies into the impacts of turbines, problems and publication delay seem to be legion. No one should be surprised, given the sheer quantity and speed of wind development and the complexity of its multiple environmental, economic and social impacts.

Cock-ups may be inevitable, but they are often laced with conspiracy, if only of the passive kind. A government which has decided to sit on its hands about wind policy is not going to put a great deal of energy (or money) into pushing officials to obtain and publish the data which would make policy change irresistible.

We understand that a wish to produce a genuinely comprehensive and accurate picture of all turbine development in Scotland (in contrast to the very unreliable mapping produced by SNH), complete with an interactive map, is responsible for the no-show since last summer. There is no publication schedule as yet.

The 14-month (sic.) study into the visual, noise and shadow impacts of ten wind farms on residential amenity, which SAS lobbying prompted and on whose project steering group Graham Lang and Linda Holt sit, has just reached the stage of a final draft, with an unspecified date for publication after the election. 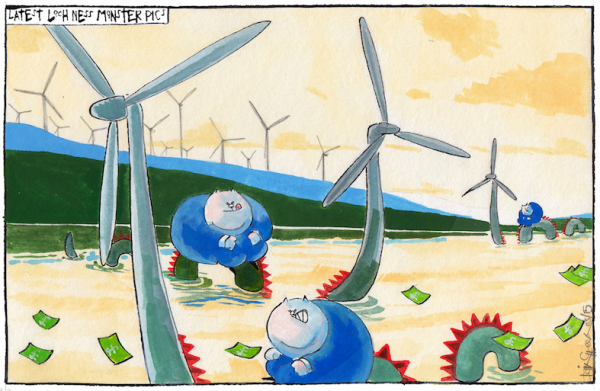