Acquired flexural deformity of the distal interphalangic joint in foals

Since 2008, a high prevalence of front limb acquired flexural deformities was observed in a Lusitano stud farm. This work aims to evaluate this problem by reporting the results from tissue alterations in the affected animals as well as environmental conditions and management changes that could have led to this observation.

A total of eleven affected animals were studied. In these, complete physical and orthopaedic examinations were performed, specifically the determination of the angle between the dorsal hoof wall and the floor. Radiographic examination, CT imaging, determination of the thickness of the cortical bone of the third metacarpian and histopathology of some tissues collected in biopsy and necropsy were done in a subset of affected foals. All the animals had been supplemented with balanced commercial diet for equine. To investigate a possible genetic cause, two foals from distinct bloodlines were brought to the stud. These also developed the deformities after 6 months. Two of the affected foals were placed in a pasture away from the initial one and two others were admitted at the Faculdade de Medicina Veterinária de Lisboa. In those animals, except for one that had to be euthanized for humane reasons, an improvement was observed on their condition, with partial recovery from the deformity.

Histopathology was performed from (i) the tendon obtained by surgical desmotomy in one foal, (ii) tendon biopsies from three foals and (iii) the tissue of one foal during necropsy. Histologically the most significant alterations were the dissociation of myofibrils of the smooth muscle. This was predominantly seen in the small intestine but also in the walls of small capillary vessels, including those of the tendon vasculature.

The flexural deformities have a complex and multifactorial etiopathogeny. They occur due to uncoupling of the longitudinal development of the bone and its adjacent soft tissues, but also from shortening of the tendon-muscle unit in response to pain. In the case series presented here, there was no obvious cause for the development of this problem, therefore we hypothesised that unusual environmental conditions might have played an important role in the development of this condition, especially those introduced in recent years.

From the stud farm’s establishment in 2000 to 2008, these symptoms had not been observed in any horse, and there was no alteration of diet (quality and quantity), conditions of housing, and physical exercise that the horses experienced.

The appearance of the deformities coincided with the installation of 2-MW wind turbines on land contiguous to the farm, this being the only environmental alteration that has occurred. 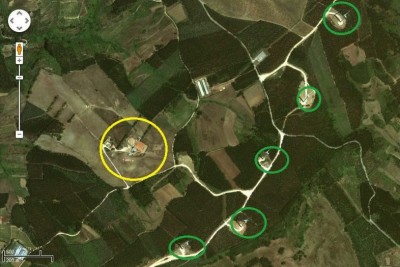 A main objective of the study is characterization of mechanical vibrations induced in different locations of the farm by operation of wind turbines in close proximity, in order to analyse possible effects of such vibrations on horses.

Abstract
At present, infrasound (0–20 Hz) and low-frequency noise (20–500 Hz) (ILFN, 0–500 Hz) are agents of disease that go unchecked. Vibroacoustic disease (VAD) is a whole-body pathology that develops in individuals excessively exposed to ILFN. VAD has been diagnosed within several professional groups employed within the aeronautical industry, and in other heavy industries. However, given the ubiquitous nature of ILFN and the absence of legislation concerning ILFN, VAD is increasingly being diagnosed among members of the general population, including children. VAD is associated with the abnormal growth of extra-cellular matrices (collagen and elastin), in the absence of an inflammatory process. In VAD, the end-product of collagen and elastin growth is reinforcement of structural integrity. This is seen in blood vessels, cardiac structures, trachea, lung, and kidney of both VAD patients and ILFN-exposed animals. VAD is, essentially, a mechanotransduction disease. Inter- and intra-cellular communication is achieved through both biochemical and mechanotranduction signalling. When the structural components of tissue are altered, as is seen in ILFN-exposed specimens, the mechanically mediated signalling is, at best, impaired. Common medical diagnostic tests, such as EKG, EEG, as well as many blood chemistry analyses, are based on the mal-function of biochemical signalling processes. VAD patients typically present normal values for these tests. However, when echocardiography, brain MRI or histological studies are performed, where structural changes can be identified, all consistently show significant changes in VAD patients and ILFN-exposed animals. Frequency-specific effects are not yet known, valid dose-responses have been difficult to identify, and large-scale epidemiological studies are still lacking.

Paper presented at the NATO Research and Technology Organisation’s Applied Vehicle Technology Symposium on “Ageing Mechanisms and Control: Part A – Developments in Computational Aero- and Hydro-Acoustics”,
held in Manchester, U.K., 8-11 October 2001, and published in RTO-MP-079(I).

Background. Noise is a major factor in many military environments. Usually the concern is with the higher frequency bands (>500 Hz) that cause hearing damage or interfere with speech. Protection against noise is thus focused on these higher frequencies, while the bands of lower frequencies (<500 Hz) are neglected, and non-audible bands, infrasound (<20 Hz) are ignored. In reality, long-term exposure to low frequency noise (<500 Hz, including infrasound) (LFN) can be quite detrimental to one's health. LFN-Induced Pathology. The disorders associated with occupational exposure to LFN have been described for aeronautical technicians and pilots. Diagnostic tools and methodologies for monitoring and controlling the development of LFN-induced pathology, have already been outlined. Immediate effects of LFN-exposure can include a) decreased capacity for cognitive functions, which implies a decline in performance, the consequences of which can be minor to devastating; b) sudden onset of acute respiratory problems, neurological disturbances, and mood alterations, such as, rage reactions. Cumulative effects of LFN-exposure can include triggering of early aging processes, and the development of vibroacoustic disease in susceptible (70%) individuals. Early compulsory retirement is a frequent situation.

Costs. Almost all military equipment require training programs for the operator. Long-term exposure to LFN can severely decrease the cost-return ratio for these operators, i.e., investment in training programs has little or no return. Accident/incidents can also damage the equipment itself, potentially jeopardizing missions. Waste of ammunition and other resources is another consequence of unmonitored LFN-exposed operators. The cost of ignoring LFN as an agent of disease is ultimately more expensive than the prevention, protection and, above all, selection of personnel for noise-environment positions.

ABSTRACT  The acoustical spectrum is usually divided into two major segments: that which can be heard by the human ear, and that which cannot. Moreover, it is usually maintained that if acoustical phenomena do not hurt the ear, then they will have no other bodily effects. In the electromagnetic (E&M) spectrum, there is also a segment capable of being perceived by human senses: visible radiation (light). However, unlike the acoustical spectrum, the E&M spectrum is not crudely divided in what is visible to the human eye, and what is not, nor is it assumed that E&M phenomena only cause bodily damage when they are seen. This is why it is possible to establish dose-responses for many different types of radiation (visible or not). A similar stance regarding the acoustical spectrum is required if dose-responses to infrasound & low frequency noise (ILFN, <500 Hz) are genuinely desired. This report focuses on information gathered over the past 27 years of research into the biological effects of ILFN exposure, with the goal of contributing to the establishment of ILFN dose-responses. A more detailed segmentation of the acoustical spectrum is proposed in order to adequately characterize acoustical environments.

Mariana Alves-Pereira and Nuno A. A. Castelo Branco