Negative health impact of noise from industrial wind turbines: How the ear and brain process infrasound

This article, the final of three installments, discusses the relationship between various health effects and our current understanding of the processing of infrasound by the ear and brain. [Part 1: Some Background [1]; Part 2: The Evidence [2].] [Addendum: A Four-Decade History of Evidence that Wind Turbines Pose Risks [3]]

As noted in the second installment of this series, Dr. Geoff Leventhall, a co-author of the 2009 AWEA/CanWEA report, attributes the health complaints of people who live near industrial wind turbines (IWTs) to psychological stress, but does not acknowledge that IWTs can be detrimental to health because infrasound and low-frequency noise (ILFN) emitted by wind turbines are largely inaudible to humans. He stands on the argument, therefore, that what we can’t hear can’t hurt us.

We know that things we cannot see, touch, taste, or smell can hurt us, so why is it unreasonable also to believe that what we can’t hear might also hurt us?

Dr. Nina Pierpont, in describing Wind Turbine Syndrome (WTS), has expressed her belief that many of the symptoms comprising WTS are mediated by overstimulation of the vestibular system of the inner ear by ILFN. Recent evidence supports the general view that the functioning of both the vestibular and cochlear components of the inner ear, and their interconnections with the brain, mediate the type of symptoms that Pierpont and others have described.

INFRASOUND: MORE OF A PROBLEM THAN WE THOUGHT?

Industrial-scale wind turbines generate peak sound pressure levels at infrasonic frequencies, especially between 0.25 and 3 Hz, as the blades pass in front of the tower. Most of us do not experience the energy in this lowest of low-frequency regions as sound; instead, we perceive a variety of other sensations. When present, infrasound can be more of a problem than audible sound.

Recent basic research on the inner ear conducted by Dr. Alec Salt and colleagues at the Washington University School of Medicine in St. Louis has provided a feasible and coherent explanation of how sound that is normally not audible can result in the kinds of negative reactions reported by people who are exposed to wind turbine noise. That research has shown that extremely low-frequency sound is largely inaudible to humans because the outer hair cells (OHCs) in the inner ear detect and effectively cancel it before it reaches the inner hair cells (IHCs). The IHC stereocilia, which do not contact the tectorial membrane, are fluid-coupled and sensitive to stimulus velocity, while the OHC stereocilia are sensitive to displacement. IHCs rapidly become less sensitive as stimulus frequency is lowered.

Cross-section of the cochlea (left), with illustration of IHCs and OHCs (right). Used by permission of Alec Salt, Washington University School of Medicine.

Readers familiar with the anatomy of the ear know that approximately 95% of the fibers innervating the IHCs lead to the brain as afferent fibers, while only about 5% of the fibers innervating the OHCs are afferent fibers. Thus, we hear through our IHCs, and our hearing sensitivity is comparable to the calculated IHC sensitivity. The OHCs, which respond physiologically to infrasound, serve as a pathway for infrasound to reach the brain. Infrasonic signals that reach the brain are normally not perceived as sound, but are believed to stimulate centers other than auditory centers, resulting in perceptions that may be unfamiliar and disturbing.

Similar pathways to various centers of the brain also exist through the vestibular, or balance, mechanisms of the inner ear, meaning that it is biologically plausible for infrasound to produce the variety of sensations described by Pierpont, sensations such as pulsation, annoyance, stress, panic, ear pressure or fullness, unsteadiness, vertigo, nausea, tinnitus, general discomfort, memory loss, and disturbed sleep.

Salt and colleagues have also found that when higher-pitched sounds (150-1500 Hz) are present, they can suppress infrasound. This means that the ear is most sensitive to infrasound when higher-frequency sounds are absent. This occurs at night when wind turbine noise is present, ambient sound levels are low, and higher-pitched sounds are attenuated by walls and other physical structures.

Another relatively recent discovery is that there is likely a cause-effect relationship between AHEs and ILFN that mirrors that occurring in motion sickness. An experiment in the late 1980s, conducted using training-mission scenarios with Navy pilots, showed that motion sickness was associated with significant amounts of acoustic energy inside the flight cabin over the frequency range from just under 1 Hz to as low as 0.05 Hz (the nauseogenic range). Maximum sensitivity occurred at approximately 0.2 Hz. That experiment resulted in the conclusion that flight simulator sickness may be, to a significant extent, a function of exposure to infrasonic frequencies. This phenomenon is akin to seasickness, except that the acoustic energy causes nausea without body movement or visual stimulation.
wind noise 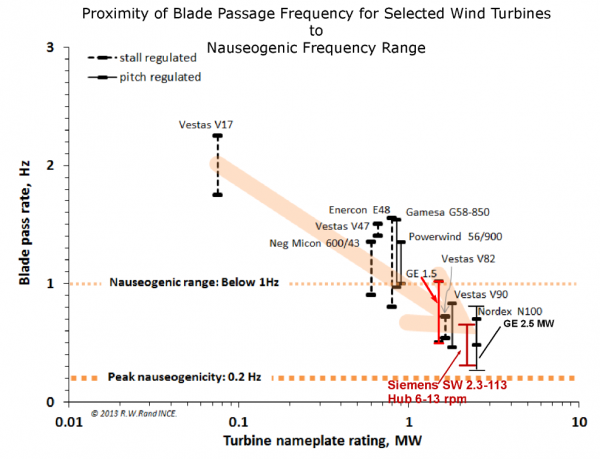 As utility-scale wind turbines increase in size and power, the blade-pass frequency goes increasingly deeper into the nauseogenic zone.

Dr. Paul Schomer, nationally and internationally known for his work in acoustics and acoustic-standards development, has suggested that because the Navy test subjects responded to acoustical/vibratory energy with symptoms similar to motion sickness, many of the similar symptoms reported by people living near IWTs can be explained by exposure to infrasound from wind turbines at frequencies similar to those observed in the Navy’s test environment. Persons affected by wind turbine noise appear to be responding directly to acoustic stimulation of the same nerves and organs affected in that experimental environment.

These research efforts of Salt and colleagues, Schomer, and others are leading the way in establishing the biological plausibility of the harmful effects of ILFN generated by wind turbines.

Dr. Salt dismisses the common perception that what we can’t hear can’t hurt us and has stated unequivocally that “Wind turbines can be hazardous to human health.”

Decisions regarding the siting of industrial wind turbines deserve careful attention to limiting noise exposure levels in community residents through specified restrictions on either distance or noise levels, or both. The right of the public to enjoy health and well-being should be paramount to the economic and political interests of the wind industry and governmental bodies. These rights need to be protected on a proactive, and not just on a retroactive, basis. Industrial-scale wind turbines should be sited only at distances from residents that are sufficient to minimize sleep disturbance and that do not put them at risk for a variety of other serious health problems.

Richard James is an acoustical consultant with over 40 years of experience in industrial noise measurement and control. He served as an adjunct instructor in Michigan State University’s Department of Communicative Sciences and Disorders from 1985-2013 and currently serves as an adjunct professor in Central Michigan University’s Department of Communication Disorders.