2019 was the tenth year in which British wind farms have received constraint payments to reduce their output because of electricity grid congestion. There has been a total of £649 million paid out over the decade for discarding 8.7 TWh of electricity. To put this in context, this quantity of energy would be sufficient to provide 90% of all Scottish households with electricity for a year.

Because of a rapid growth in wind farms, particularly in Scotland, the total paid has tended to increase year on year in spite of grid reinforcements and new grid lines such as the £1 billion Western Link from Hunterston to Deeside, which was built specifically to export wind power from Scotland to English and Welsh consumers. Figure 1. displays this trend, showing payments rising from £174,000 in 2010 to a new record cost of more than £139 million. The quantity of electricity discarded in 2019 was also a new record at 1.9 TWh. 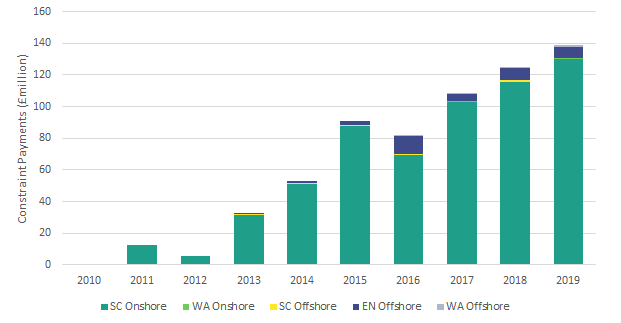 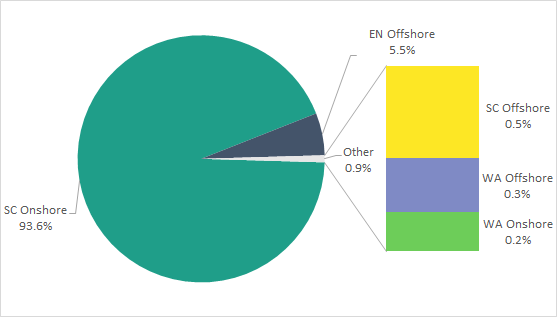 Figure 4: Cumulative constraint costs by year for the top ten earning wind farms, an animated bar-chart race. Click the play button above the bar chart to view the animation. The colour of each wind farm indicates the year it first received constraint payments. Note that the intra-month costs are linearly interpolated for the purposes of the animation and the costs on each bar are shown to 2 significant figures only. (Animation adapted from Observable Bar Chart Race [1].)

It is perhaps unsurprising that Whitelee, being the largest UK onshore wind farm and one of the earliest entrants into the constraint market, has received the largest constraint payment total. However, recent years have seen newer and smaller wind farms overtaking Whitelee, suggesting that the sites currently being chosen for wind farm development are in locations with poorer grid connection. Whether this is a deliberate choice, designed to maximise average earnings per MWh generated, is open to debate.

Figure 5: Cumulative constraint costs in 2019 for the top ten earning wind farms, an animated bar-chart race. Click the play button above the bar chart above to view the animation. The colour of each wind farm indicates the year it first received constraint payments. Note that the intra-month costs are linearly interpolated for the purposes of the animation and the costs on each bar are shown to 2 significant figures only. (Animation adapted from Observable Bar Chart Race [1].)

In 2019, six wind farms were responsible for 50% of the constraint payment receipts, namely Clyde, Kilgallioch, Whitelee, Stronelairg, Fallago Rig, and Dunmaglass. It is particularly notable that of these six highly constrained wind farms:

a) Stronelairg received planning permission in spite of being behind a grid bottleneck and was subject to a Judicial Review due to its impact on wild land. Moreover, there are currently two further neighbouring applications in process for Glenshero owned by the GFG Alliance, and Cloiche, which is proposed by SSE, the operator of Stronelairg.

b) Whitelee, which opened in 2007 with a capacity of 322 MW, and was one of the first wind farms constrained off in the Balancing Mechanism, has been extended very significantly, with a further 217 MW entering service in 2012.

d) Fallago Rig is currently seeking an extension to add a further 12 turbines.

Wind farm owners charge more per unit to reduce output than they earn through generating. For wind farms subsidised under the Renewables Obligation (RO) the income foregone when instructed to reduce output is the value of the Renewable Obligation Certificates (ROC). Typically, wind farms ask to be paid much more than the lost income, and in the early days of wind farm constraint payments, the premiums charged for not generating were very high indeed. For example, in 2011, Crystal Rig 2 charged £991 per MWh to reduce output compared to the value of the ROC at that time of £42 per MWh. Kilbraur, Millennium, Farr, An Suidhe were charging between £200 to £320 per MWh constrained-off in 2011.

This was regarded as an abuse of market power, and the Government introduced the Transmission Constraint Licence Condition (TCLC) in 2012, which sought to prevent excessive bid prices in the event of a constraint. While there can be no doubt that the TCLC resulted in a reduction in prices, they are still well in excess of the subsidy foregone in 2019 as Figures 6 and 7 demonstrate.

Figure 6 shows the five onshore wind farms which received the largest premiums above the subsidy forgone and the five which received the smallest premiumin 2019. It is interesting to note that Andershaw, Blackcraig, Beinneun, Cour and Sanquar, which are receiving a high premium over lost income, are newer wind farms accredited after the ROC banding for onshore wind was reduced such that they receive 0.9 of a ROC per MWh in subsidy. Assuming the 2019 ROC value will be approximately £55, these wind farms would receive £49 per MWh if generating but ask for and receive £96-£98 per MWh not to generate and thus get a premium of £47–£49 above the subsidy when constrained off. The five wind farms with the lowest constraint prices are older wind farms which receive 1 ROC per MWh. In 2019, they were setting constraint prices of £64-£69 per MWh to reduce output, thus getting a premium of £10-£15 per MWh.

Figure 6: Average premium price (per MWh, above the foregone Renewables Obligation subsidy) paid to reduce output when constrained off in 2019 for the five most expensive and five least expensive onshore wind farms. The calculation assumes a ROC value of £53 for Jan-Mar 2019 and £55 for Apr-Dec 2019.

The RO-subsidised offshore windfarms which received constraint payments fall into various subsidy bands: 1, 1.5, 1.8 and 2.0 ROCs per MWh. Taking these variations into account, it is again the newer wind farms that are charging higher constraint payments with the most expensive five offshore wind farms making £52 – £74 per MWh more than the site-specific subsidy forgone. The five least expensive received £20 – £38 per MWh over their subsidy.

Figure 7: Average premium price (per MWh, above the foregone Renewables Obligation subsidy) paid to reduce output when constrained off in 2019 for the five most expensive and five least expensive offshore wind farms. This calculation assumes a ROC value of £53 for Jan-Mar 2019 and £55 for Apr-Dec 2019.

It is difficult to see any justification for compensation over and above the subsidy lost, and indeed REF has suggested, as many economists would argue, that constraints are a normal and entirely foreseeable commerical risk and should not be compensated at all. Indeed, REF infers from the data presented above that constraint payments are actually encouraging the siting of onshore wind farms in grid constrained areas. This is clearly not in the public interest, and entails a significant cost to electricity consumers, who ultimately fund constraint payments through their bills.

Finally, it must be remembered that the cost of mislocating wind farms in areas with weak grid connection or behind constraints is much greater than the direct payments to wind farms themselves, large though these are. When a wind farm is constrained off the grid on one side of a grid bottleneck, National Grid as the system operator is required to make up the short fall in electricity by paying other generation (usually gas-fired) to increase generation on the other side of the bottleneck. Over the last ten years, the overall cost of constraints has risen by nearly 400%, from £165 million in 2010 to £636 million in 2019, reflecting the expense and difficulty of integrating a large wind fleet, and increasingly a large solar fleet, into the GB electricity grid. 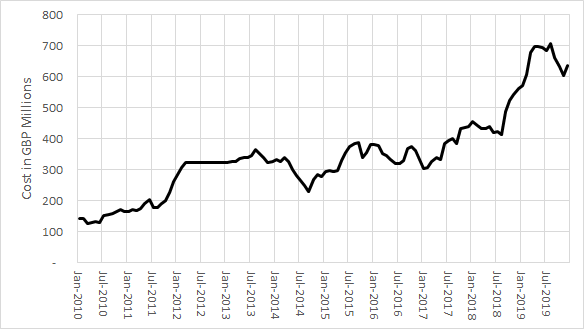 Figure 8: Running twelve month total cost for all grid constraints from January 2010 to December 2019 demonstrating the four-fold increase over the decade.