Although there are many ways that the wind can be used to turn a turbine, this site concerns the 3-bladed horizontal-axis upwind (i.e., “facing” the wind) design that is usually used.

The only major design difference among the latter is whether the generator is direct-driven or gearbox driven. The former are increasingly used in larger wind turbines for the advantage of fewer moving parts. The gearbox on wind turbines is the second most common site of mechanical failure (after the blades).[1] Direct-drive generators, however, because the rotor speed is slower, require many – up to tenfold – more magnets, about a third of whose composition is the rare earth metal neodymium. Although rare earth metals were found to be – well after receiving the classification – not all that “rare”, their mining and processing are highly toxic and environmentally harmful, and the supply is therefore limited.[2]

The basic design begins with a steel tubular tower that on land is anchored to a steel bar–reinforced concrete foundation which may be further anchored by drilled pilings. At the top of the tower sits the “nacelle” (named after the engine housing of an aircraft) containing the rotor shaft, gearbox, and generator. At one end of the nacelle, three airfoil blades are connected to a hub that is connected to the rotor shaft.

The nacelle can be turned at the top of the tower to keep the blade assembly perpendicular to the wind and upwind of the rest of the nacelle. And each blade can be rotated on its axis to adjust its pitch, changing the amount of “lift” from the wind that moves it around the hub so that the rotation speed remains fairly constant. 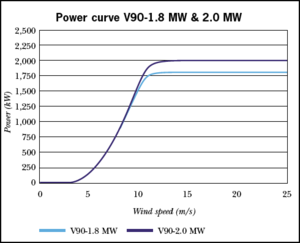 Every wind turbine has a range of wind speeds at which it is operational, from the “cut-in” to the “cut-out” speed. When the wind is close to “cut-in” speed, the generator is used as a motor to start the blades turning in anticipation. As the wind speed increases, the blades are able to overcome the power flowing in from the grid and begin to push power out. When the model’s “rated” wind speed is reached, the turbine is able to produce at its rated capacity, e.g., a 2-MW turbine is generating power at 2 MW. As the wind speed increases further, the blades are increasingly pitched (rotated on their axis) to capture less of its energy to keep their rotation speed fairly constant (see also: Efficiency). At the cut-out wind speed, the blades are completed “feathered” to stop spinning, and at higher wind speeds they are braked to prevent damage.

Because of the variable power generation with wind speed, over time a wind turbine produces only 25%–35% of the energy implied by its rated capacity. And because of the steep slope of power generation as the wind rises and falls between the cut-in and rated speeds, a wind turbine generates electricity at or above its average rate (25%–35% of capacity) only about 40% of the time.