One official’s claim of compliance is another resident’s sense of violation as turbine noise testing lags. The Globe South on Sunday June 16, 2013 quoted Commissioner Ken Kimmell defending Department of Environmental Protection policy (Wind advocates say critics’ assertions are exaggerated by Robert Knox). According to Kimmell, most turbines are in compliance most of the time. But this belies the very few tests that have been run (“staffing limitations” were cited by DEP spokesman Ed Coletta), and the flawed methodology in use:

“It’s consistent with the methods used to deal with a variety of projects, such as sand and gravel and asphalt batching plants, for years,” Kimmell said. “We have people on the staff trained to recognize wind gusts and discount them.” 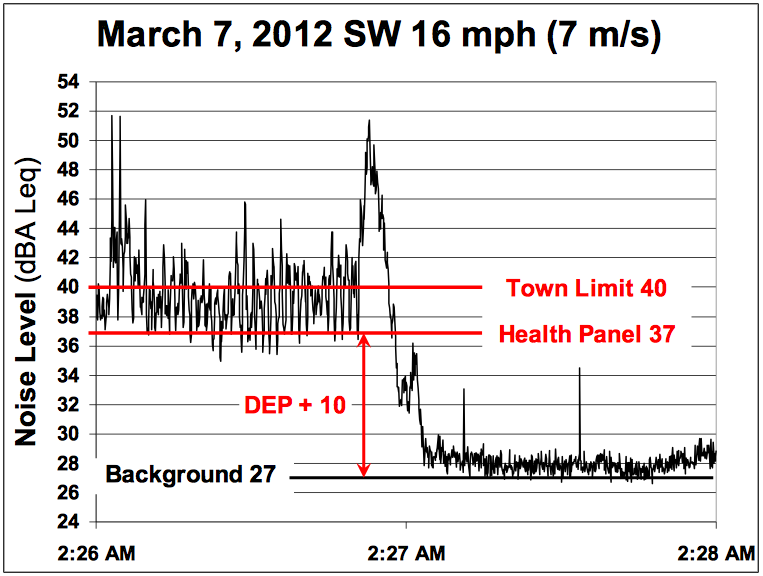 (Most gravel pits and batching plants do not run through the night and don’t suddenly appear in a neighborhoods without notice to the abutters).

in May residents of Clarksburg, Fairhaven, Florida, Kingston, Monroe, and Scituate sent a letter to the Mass. DEP. These communities, impacted by five different wind turbine projects, asserted that DEP used outmoded standards for testing wind turbines. The letter also noted that developers have special access during testing, while community input  is limited. The raw data is not shared, so it is not open to independent verification. The letter called for: