“The idea of wilderness needs no defense, it only needs defenders.” – Edward Abbey 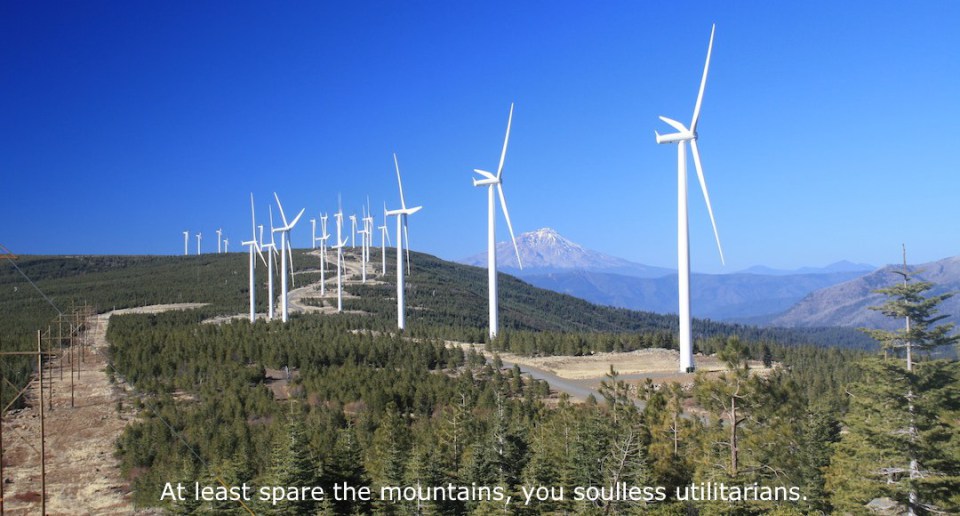 This is the aptly-named Hatchet Ridge, a formerly nice vista south of Mt. Shasta, CA. It was built by the same outfit [2] that ruined the remote view from Great Basin National Park.

Instead of saving the planet, utilitarian zombies are sTaving it with carbon-dependent mega sprawl. This is profoundly depressing to people who haven’t sold out to the modern grind.

Windschmerz, a newly coined word*, describes the sinking feeling of witnessing a huge industrial plague being spun as good for the environment despite its obvious negative impacts. Instead of constraining the human footprint with conservation and rooftop solar, Man decided to turn the countryside into industrial parks. If this urban mega-sprawl [3] is the new environmentalism, nature has a slim chance of remaining intact anywhere the wind blows and power lines can reach. Wind power is so absurdly large that one can only look at it with profound disappointment or concoct stories about its “beauty” and “installed capacity” to distract from the obvious. Mainstream environmental groups have done exactly that. The Sierra Club, NRDC, The Union of “Concerned” Scientists, and even Audubon have sold out to platitudes like “wind is a vital part of our energy mix” (despite its futility as a fossil fuel replacement) and “they can be carefully sited” (despite growing protests as unsullied views run out). Something is rotten in Windmark when self-proclaimed environmentalists chide people for lamenting the replacement of natural horizons with spiky machines.

Even though it’s the environmental equivalent of trying to prevent arson with vandalism, wind power has a momentum that’s hard to control because an Environmental-Industrial Complex has grown around it, propped up with slick cover stories. When thousands or millions of jobs depend on something, moral objectivity becomes nearly impossible. Germany has been a test-case for this misguided form of progress with its Energiewende [4] mandate that caused alarm [5] decades ago with only a fraction of today’s turbines. The landscape desecration [6] is so blindingly obvious that many people apparently can’t perceive what they’re seeing, especially if incomes depend on it. A whole government/industry PR machine is dedicated to pretending these giants are midgets.

Windschmerz is a variant of weltschmerz [7] (world pain or sadness) focused on a specific technology that’s destroying nature while claiming to save the planet. Are there any safe vistas now? Even if remote areas are spared, millions of acres of “near wilderness” on the outskirts of cities must remain intact to avoid a world that feels completely urbanized. Such lands are under constant threat as UGB [8] zoning laws are weakened for utilitarian purposes. The industry seems happy to keep trashing scenery and wildlife until these eyesores are too thick for even the most deluded [9] Greens [10]. It used to be conservatives who didn’t respect landscapes but liberals have been successfully brainwashed by these scenery-eaters. It happened on the sly without adequate warning, mainly in Europe at first. Machine overpopulation gets similar reactions to denials of human overpopulation. “Isn’t this how modern life is supposed to be?” But, like the frog in a pot of water analogy, the masses will someday wake up and ask “What the hell happened to all the scenery?”

Comparison of moderately large wind turbines to a cellular tower (disguised as a tree by public demand) and the Metaphor: Tree of Utah sculpture, often called a desert eyesore.

Wind energy projects do all of the above except for deep drilling, and they are now the tallest structures in rural areas, especially on mountaintops which amplify their long-range visibility. The starkness of their contrast to natural surroundings is not just about size. Nothing else on that scale catches the eye with rotation, plus the shadow-flicker it creates. Mandatory red lights also intrude on skies that never had them. Wind power advocates downplay those obvious impacts, and ride on the psychological notion that anything (appearing to) fight carbon must not be causing harm. It’s a very narrow definition of harm, convenient to the industry’s agenda of grabbing subsidies for new construction projects.

No matter how many zealots call them “beautiful,” wind turbines will always impact millions of people and animals in negative ways. The industry wants to expand what we see today by orders of magnitude if they can get away with it. These machines are a colossal aesthetic blunder that doesn’t require number-crunching to analyze. All you need is eyes, ears and environmental awareness. They aren’t replacing older industrial scars like coal mines; they’re just adding to the total human impact. The moment wind turbines began expanding beyond their experimental beginnings and corporations [12] got involved, it was inevitable that this would happen. The goal is to make them as tall as possible to catch elusive winds, which means they will never become less visible. It’s also a pipe dream that they can be made quiet or safe for flying animals. Most people in the industry must know this, which makes them doubly full of it.

One of the few locations where wind turbines don’t look out of place, though these are not the largest models. Seen at ground level they still loom over most structures.

This wind project has similarities to coal mining mountaintop removal, yet some people will only criticize coal projects. It’s really all part of the big energy mix.

The 2018 Kilauea eruption generated publicity for “damaging” Hawaii even though it’s a natural force. Much more attention should be paid to relentless man-made destruction of tropical landscapes. The image below shows Maui’s Kaheawa Wind Power project occupying a significant piece of the island, with the smaller Auwahi project to the south (yellow ovals). The Kahuku project on Oahu was initially more ambitious but ran into problems, including a battery storage fire. Later, proposed 650-foot wind turbines in the same area prompted outcries over bat kills and further losses of scenery. Wind power sprawl on small land masses makes a clear case for their limits. The Thirty Meter Telescope on Mauna Kea is another example of construction overshoot, protested by those who still respect nature’s integrity.

This shows the scale of just two Maui wind projects. A 5-mile access road was needed for Kaheawa (left & center panels, larger yellow oval). Auwahi is circled at the bottom.

Compounding the bleakness of this hypocritical sprawl, a sizable number of wind energy opponents are global warming deniers who think wind turbines were invented expressly to fight climate change and must be part of a Green/NWO cabal to infringe on their property rights. Donald Trump is a famous critic and UK writer James Delingpole is another example. A promising book by an “ecologist,” called “The Wind Farm Scam [13]” is tainted by climate denial and it’s common in other books like “Paradise Destroyed [14]…” These people make good points about the economic & environmental hypocrisy of wind sprawl, yet foolishly question the existence of gaseous atmosphere sprawl (it’s really all the same bloat). Some otherwise clever sites like stopthesethings.com [15] are strewn with climate “skepticism” and get blacklisted on sites like sourcewatch.org [16] as fossil fuel shills. Both sides of the wind power debate favor vilifying an enemy instead of tackling intrinsic flaws in growth-based capitalism and human nature.

Lesser-educated rural people are often caught in siting battles, so they add their base ignorance to the debate. Some see corrupt officials like Scott Pruitt as righteous warriors against “unfair” EPA carbon regulations. Even though their suffering is very real, these yokels are hurting their own cause. They should treat wind power as one of many rural threats, like deforestation (major component of wind projects), noise pollution from boom cars in rural drug ghettos, and homes sprawling into wild areas. It’s unclear how many rural anti-wind activists are OK with coal mining mountaintop removal but they should realize it’s all part of the pillaging continuum, regardless of whether it pays their bills (where wisdom ends and greed prevails). Their mindset of “us against city-slickers” distracts from everything the wind business has in common with fossil fuel, mining and logging interests.

Wind energy is the opposite of small-footprint thinking that real environmentalists should favor. It thrives on a single-action bias [17] that fails to consider total environmental impact. It’s part of the same engineering mindset that destroys nature for money in the fossil fuel business. The standard ploy is that carbon is THE environmental demon and must be fought at any cost, though many wind farm workers are interchangeable with frackers. They are industrial mercenaries who do what they’re told and cash their checks. At least the old environmental villains weren’t overtly trying to fool people.

The next time you look at a horizon full of mutant pinwheels and windschmerz hits you, just let it happen. Then get angry and join the fight to stop them. Here are some links [18] to help with that.

“In some way or other, the human race has to learn how to leave the world alone.” – Alan Watts 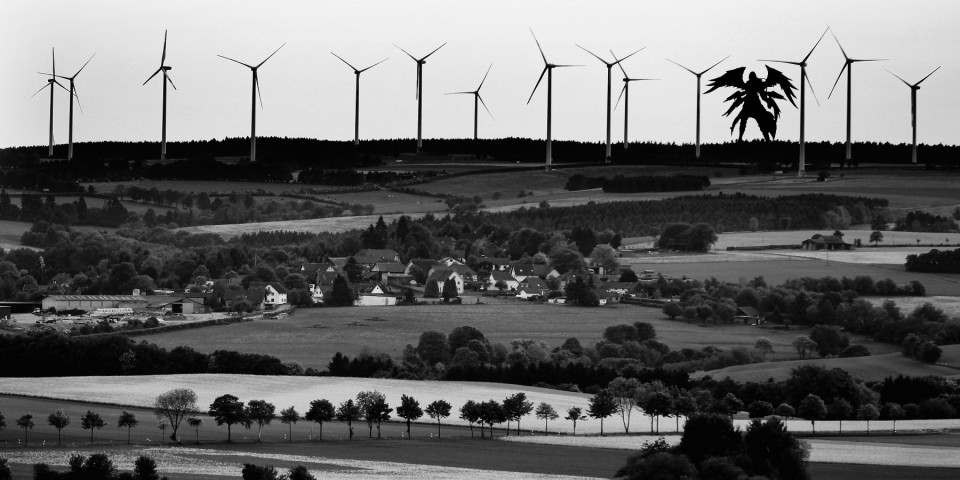 These skeletal skyscrapers don’t belong in rural or wild places. They ominously loom over the countryside like nothing else ever invented.

Disclaimer: This blog has been referenced on some anti-wind-power sites that promote global warming denial, which is definitely not the angle here. The real solution (if any) to environmental problems is economic growth cessation and a stable population size.

The original page may be updated and reworded at random with new information. [1] If you cite it, please post the link instead of a pasted snapshot. The word “windschmerz” (with no spaces) may have been first used here, but nobody owns the definition.

[NWW note:  As with everything we reproduce, NWW does not necessarily agree in every part.]