Wind turbines as yet unsuitable as electricity providers

Wind turbines have been widely accepted as electricity producers thanks to claims that wind comes free of charge, and each kWh thus produced replaces a kWh provided by conventional techniques, i.e., it saves the fossil fuel otherwise needed. However, these assumptions have never been validated in existing power distribution systems even after the installation of as much as 86 GW of wind power in Europe alone.

This feature makes wind energy as such unsuitable as a power source for an electricity grid where supply and demand must be balanced at all times. In order to stabilise the power of the grid we need either storage or conventional generators as backup. This has important consequences, as it reduces the fuel savings promised by the wind industry, while it doubles the costs of the power systems.

An often-heard objection to this argument is that by spreading wind turbines over a large area the fluctuations in wind fields average out. This argument can be quantified by looking at the correlation length in wind patterns. Rather than discussing these wind patterns we discuss the production of 7000 wind turbines in Germany.

In 2004 the electricity company E.ON had some 7 GW of wind power installed over the whole territory of Germany. In their ‘Wind report 2005’ [1] they published the wind electricity produced in 2004 on a day-by-day basis (Fig. 1). The conclusion is that on a 24 hour basis the correlation in wind energy production is strong over all of Germany. This effect has been analysed for the case of Germany by the Aachen University [2]. The result is that the possible substitution of conventional sources by wind is only a few per cent of the installed wind capacity. This result is in contradiction to the statement of Eecen et al. [3]. 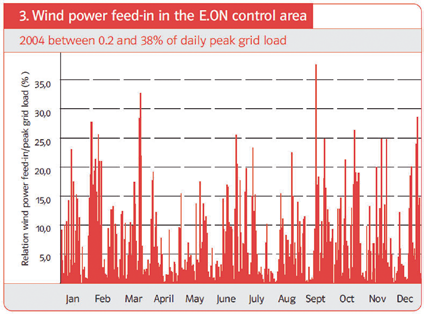 Other studies have shown a strong correlation between the wind energy production in Denmark, Germany and Great Britain together. The North Sea is often hailed as the future powerhouse of Europe, but its opening hours are quite irregular… This implies that wind power is not an alternative for conventional production capacity. The investment in wind turbines requires extra capital on top of the cost of a conventional system, which by itself is already capable to satisfy the total demand. Moreover this extra capacity also requires extra connection lines. In Germany the plans to install more wind turbines require 4000 km of extra high voltage transmission lines, which otherwise would not be necessary.

The capacity factor and curtailment

Windmills start producing electricity at about 5m/sec and reach full power at 13 m/sec. The capacity factor of a wind turbine is the fraction of the time it effectively runs at full capacity.The capacity factors offshore are about 0,4 and about 0,25 in good locations onshore.The measured factors are 0,22 for the Netherlands, 0,17 for Germany and 0,24 for Ireland.

This means that a wind energy system which has enough capacity to satisfy the demand, covers less than 25% of the total demand during a year.

Is it possible to absorb such an amount of wind energy in a conventional system? Here we follow the calculations done by B. Ummels [4]. The electricity demand follows a curve which is largely the same everywhere in Europe. Figure 2 represents such a curve for the weekly demand in the Netherlands in 2007. Such curves are in use by the producers to balance supply and demand. Taking a full year of such curves, we split the total demand in 15-minute periods to arrive at 365 × 24 × 4 = 35040 periods of demand. The computer now sorts the 15-minute intervals with their demand in decreasing order and puts them on the Y-axis of Fig. 3. These points form the top curve in the graph. It shows the so-called demand-duration curve for the Netherlands. One can see that the maximum electricity demand was around 20 GW, and the minimum just below 10 GW. Next one can obtain the data on wind speed per 15-minute interval from the Meteorological Institute. These data allow calculating the actual wind electricity yields for any desirable total installed capacity. This wind-generated electricity yield (for each relevant 15 minute time slot during the year) can be subtracted from the demand,so the production of wind energy is now represented as a negative demand. Ummels [4] has done this for installed capacities of 2 to 12 GW in 2 GW steps (see Fig. 3).

FIG 2: Typical behaviour of total electricity demand over a period of a week 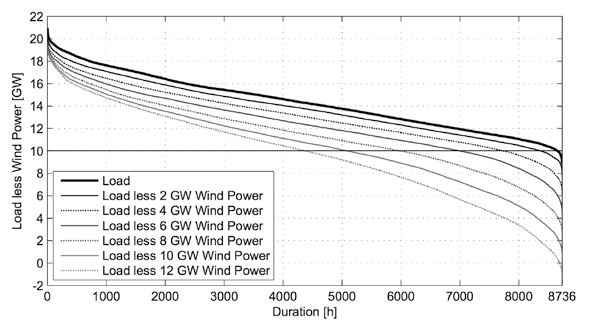 FIG 3: Demand-duration curves in the absence of wind power (upper curve) and with the wind power contributions indicated

The ‘must run’ capacity is defined as the minimum output of a conventional system under the requirement that it can deliver full output on short notice, i.e., during a period of rising demand and falling wind production. The ‘must run’ output is represented as a horizontal line in figure 3. The height of this line is a subject of debate, but the choice of 10 GW is the result of the following arguments:

The surface under the horizontal line represents the amount of wind energy which cannot be accommodated in the grid.With 12 GW wind power installed one could theoretically provide 20% of the total demand. However, the demand-duration curves demonstrate that about half the time there is surplus wind power. The total surplus amounts to 40% of the supply by wind. Not only is a solid 40% of the wind production lost, but also the conventional system has to run at minimum capacity during exactly half the time. Export is still touted as the solution for wind energy oversupply. This argument is not valid because, when we have high winds in one country in Western Europe, it also blows in the surrounding countries. Such is the nature of our weather systems.

Let us turn again to the great example for the wind proponents, i.e., the Danish situation. The Danes produce 20% of their electricity by wind, but half of that cannot be accommodated locally. This oversupply is exported to Norway and Sweden, where it is used to replace hydro electricity. Since 2010 the Scandinavian Power market rewards electricity oversupply with a negative price of up to € 200 per MWh,or € 0,2 per kWh.

CEPOS, an independent Danish scientific institute, has issued a report entitled: “Wind energy, the case of Denmark” [6]. The authors are quite explicitly negative about the practice of supplying free (subsidized) wind electricity to their Scandinavian neighbours at times of oversupply, and the purchase of electricity at high cost during periods when the wind cannot deliver.

We quote from page 29: “The very fact that the wind power system, that has been imposed so expensively upon the consumers, cannot and does not achieve the simple objectives for which it was built, should be warning the energy establishment, at all levels, of the considerable gap between aspiration and reality.” Negative electricity prices are the only way to stop the turbines, but this phenomenon endangers the exploitation of the conventional power generation system, unless the government (i.e., the citizens) pays additional subsidies to keep the backup systems running.

The saving of fossil fuel

Many studies worldwide indicate that the fuel saved by wind is far less than proponents assume [7,8,9]. Most of those studies are based on models by lack of operational data with two exceptions: The Bentek report on wind in Colorado and Texas [4] and Udo’s analysis of the operational data of EirGrid [10].

But let us first review the factors affecting the actual performance of the electricity-generating system when wind turbines are added.

The widely published argument in favour of wind energy is: “The conventional units produce less energy, so they consume less fuel”. Several factors influence this simple result in a negative sense.

The Bentek study used the actual exhaust data of CO2 and other gases before and after the introduction of wind developments. The authors corrected for import and export, change in demand and other relevant factors. The conclusion is: wind does not save fuel and does not reduce emissions in Colorado and Texas.

Udo’s review of the actual Irish data revealed that a 12% wind contribution in the Irish grid system without large-scale storage resulted in a fuel saving of 5%. In the Bentek research the factors 5, 6 & 9 are not taken into account. The inclusion of 7 is dubious. In the EirGrid data, the basis of Udo’s analysis, the factors 4, 5, 6 & 9 were not taken into account. The inclusion of 3 and 7 is uncertain.

The cost of wind energy

In the article of Eecen et al. [3] two claims are made about the costs of wind energy:

A. “The cost of onshore wind energy reaches the cost of fossil energy…”

Our comments are the following:

B. “…it is expected that the relatively young offshore wind technology will experience a strong learning curve, leading to significant cost reductions”

We note: From 2005 to 2010 the cost of installing offshore wind farms has increased from 2 million euro/MW to 4 million euro/MW [15]. This is a strong learning curve indeed.

Quantifying the decrease in efficiency of the electric power system and the extra fuel consumption induced by wind developments is by no means a simple matter. To our knowledge there are presently not sufficient data in the public domain to substantiate a definite answer to the question how much fuel and CO2 emission is saved. It depends on the actors, the equipment, the kind of fuel, the amount of wind penetration, the behaviour of the regional wind, the amount of storage, the interconnection of regional grids etc. Decisions to install large-scale wind-powered electricity generation are based more on the expectation to save significant amounts of fossil fuel and CO2 emission than on any evidence that this is indeed the case.

Wind technology is not suited for large-scale application without a good buffer and storage system.We propose to stop spending public money on large-scale use of wind. This money should be spent on R&D of future power systems. We expect that wind will not play an important role in these future systems.

[13] The British Consumer Society, WHICH, discovered that small wind turbines for individual houses use more electricity than they produce, due to self-consumption of their power electronics.