INTRODUCTION
Wind turbines are a form of renewable energy, which generate electricity from wind energy, a practice dating back over 100 years. The production of electricity from the movement of wind turbine motor blades creates both mechanical and aerodynamic noise. This type of environmental noise is a growing public health concern, especially for residents living close to wind turbines. A body of evidence now exists to suggest that wind turbine noise can impair health and contribute to annoyance and sleep disturbance. However, in Ontario, little is known about how wind turbines impact people living in their vicinity. This investigation was a cross-sectional study involving eight Ontario communities that contain ten or more wind turbines. This study investigated the impact of wind turbine noise, using distance as a surrogate measure, on quality of life (both physical and mental health) and sleep disturbance in residents living close to wind turbines. Dose-response relationships were examined in an attempt to investigate acceptable exposure levels and appropriate setback distances for wind turbines.

Studies have shown that high sound pressure levels (loudness) of audible noise and infrasound have been associated with learning, sleep and cognitive disruptions, stress, and anxiety (Leventhall et al., 2003; WHO, 2009; Knopper & Ollson, 2011). More specifically, studies have suggested that wind turbine noise (i.e. low-frequency sound energy below 20Hz) can impact health, though this is still an area under debate (Pierpont, 2009; Salt & Hullar, 2010).

Research also suggests that some inner ear components (such as the outer hair cells) may respond to infrasound at the frequencies and sound levels generated by wind turbines. Therefore, there is a possibility that exposure to the infrasound component of wind turbine noise could influence the physiology of the ear leading to changes in the exposed individual (Salt & Hullar, 2010).

METHODS
For this cross-sectional study, the “Quality of Life and Renewable Energy Technologies Study” survey was used to measure the impact of wind turbine noise on health. Using Canada Post’s Unaddressed Admail Service, surveys were sent out to 4876 residences in Ontario counties that contain 10 or more wind turbines. Completed surveys were returned to the University of Waterloo by study participants using Canada Post’s Business Reply Mail Service. Members of the Renewable Energy Technologies and Health team coded and entered the results into Microsoft Excel as surveys were received. Survey respondents’ self-reported addresses (i.e. full street addresses with postal codes) were entered into Google Maps to determine the location of each residence. All analyses were performed using SAS 9.22. Descriptive and multivariate analyses were performed to investigate the effect of the main independent variable of interest (distance to nearest wind turbine) on the various outcome measures.

RESULTS AND DISCUSSION
The data obtained for use in this study were collected between February 1st and May 31st, 2013. In total there were 412 surveys returned; 16 of these survey respondents did not provide their home address. Therefore, 396 surveys were included in the analysis.

The relationship between ln(distance) (as a continuous variable) and mean Pittsburgh Sleep Quality Index (PSQI) was found to be statistically significant (p=0.0096) when controlling for age, gender and county. This relationship shows that as the distance increases (move further away from a wind turbine), PSQI decreases (i.e. sleep improves) in a logarithmic relationship. Multivariate analysis involved assessing distance to the nearest wind turbine as both distance and ln(distance). In all cases, ln(distance) resulted in improved model fit. 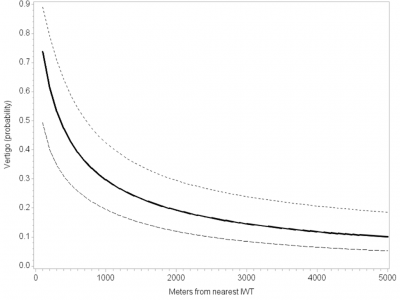 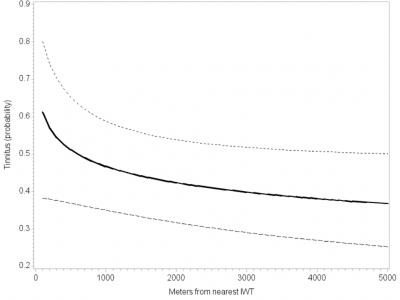 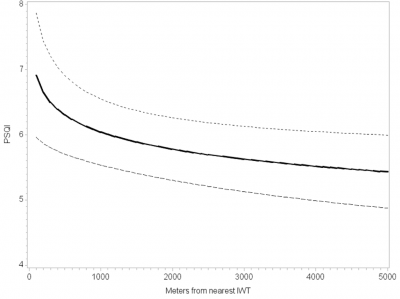 Presented as a poster at Symposium on Sustainability, Thursday, October 17, 2013, York University, Toronto, Ontario – part of the Symposia of the Ontario Research Chairs in Public Policy.