The measurement of sound at very low frequencies, below 100 Hz, is difficult and requires the use of special instruments. In the Wind Turbine Noise & Health Study conducted by Health Canada, microbarometers were used because they are capable of measuring frequencies between 0.1 Hz and 100 Hz. Microbarometers were installed at distances of 125 m, 2.5 km, 5 km and 10 km from the nearest wind turbine in […] wind turbines.

The noise levels from a wind turbine can and has been predicted using mathematical models. However, commercially available software that is in general use today cannot be used for very low frequencies and long distances. For example, the calculation procedure published by the International Standards Organization (ISO) is not intended to be used for frequencies below 63 Hz. Further, the ISO procedure was not originally intended to be used for distances greater than 1 km or for sources as high as modern day wind turbines […]. …

One key source of noise from wind turbines is the periodic passage of the wind turbine blades in front of the main supporting mast. There must be sufficient wind for the operation of a wind turbine. However, for wind speeds greater than approximately 8 metres per second (m/s), the wind turbine rotors in the current study were restricted to rotational speeds no greater than 16 revolutions per minute (RPM). With three blades spinning at 16 RPM, a blade passes the mast 48 times per minute, or once every 0.8 second (i.e. 0.8 Hz). Measurements of wind turbine noise showed a peak in the spectrum at 0.8 Hz with additional peaks at 1.6 Hz, 2.4 Hz, 3.2 Hz, 4.0 Hz, 4.8 Hz, 5.6 Hz, 6.4 Hz, 7.2 Hz, and 8.0 Hz. The presence of a peak at 0.8Hz and the associated harmonics of this frequency in field measurements confirms that the measured sound is (at least partially) resulting from wind turbine operations. These frequencies below 20 Hz are generally called infrasound. At frequencies measured between 20 and 100 Hz, there are other sources of noise, such as the gearbox or generator.

Like all sound, when wind turbine noise propagates over flat ground, levels generally decrease as one moves away from the source. Estimating what the levels will be at any given receptor requires an understanding of how fast the levels decrease over distance. The main factor affecting the decrease in levels for frequencies below 100 Hz is the prevailing weather conditions. [The prevailing weather conditions refer to the wind speed, wind direction, the amount of cloud cover, and daytime or nighttime.]

During the day, the sun heats the ground resulting in an air temperature that is highest close to the ground. Sound travels faster in warm air than cold air. As a consequence, when traveling along the ground, sound will bend from the warmer air towards the colder air above causing the sound rays to curve upwards away from the ground as illustrated in Figure 1. Sound rays also curve upwards when the sound is propagating upwind. The upward-curving rays cause the sound at ground level to decrease in level very rapidly as one moves away from the turbines. 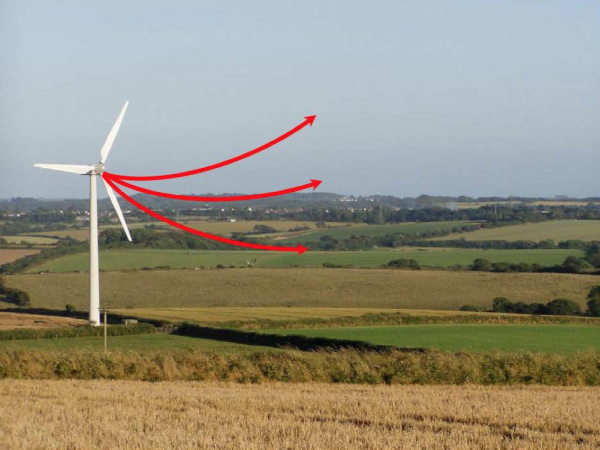 During the night, the ground cools faster than the air causing a temperature inversion. During an inversion, sound rays curve downward towards the ground as illustrated in Figure 2. Sound rays also curve downward when the sound is propagating downwind. The downward-curving rays cause the sound to decrease in level relatively slowly as one moves away from the turbines.

The difference between daytime and nighttime conditions influenced the ability to measure wind turbine noise in this study, Thus, noise from wind turbines was more often measured during the night or downwind from the turbines at distances beyond 2.5 km. 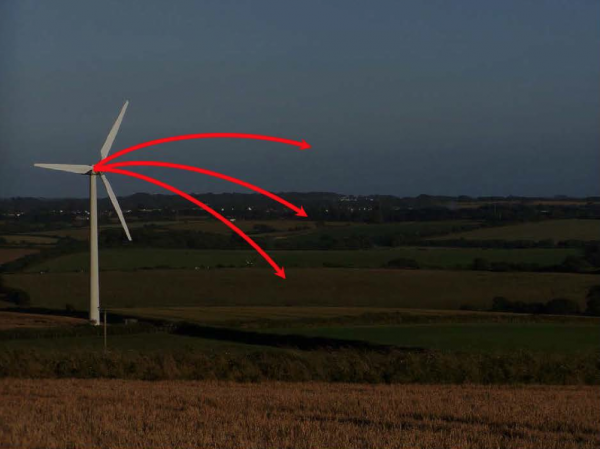 Other factors that normally affect how sound levels decrease as the distance to a source of noise increases include the type of ground cover (snow, grass, pine needles, asphalt, etc.) and air absorption. [Air absorption is caused by the collision of the air molecules. The collisions produce a rapid decrease in sound level at high frequencies as sound propagates, but has only a negligible impact on frequencies below 100 Hz.] Sound frequencies above 100 Hz do not propagate far when there is a fresh layer of snow, for example. Instabilities in the air called turbulence can also affect how sound levels drop under certain weather conditions. However, for wind turbine frequencies below 100 Hz, these other factors are not significant.

In addition to the prevailing weather conditions, topography and ground coverage, the number of wind turbines in operation will determine the levels measured by the microbarometers. In the current study, measurements were based on the collective contribution from only four wind turbines. As the number of turbines increases, the noise levels are expected to increase. Similarly, if the number of turbines decreases, the noise levels are expected to decrease.

One of the main challenges found in this study related to measurement of wind turbine noise below 100 Hz was separating the wind turbine noise from the ambient background noise. The ambient background noise is comprised of noise generated by man-made sources, such as highway traffic, trains, aircraft, and industry, and by naturally-occurring sources including surf-generated infrasound noise. The separation was only possible when the measured spectra showed the characteristic peaks related to the blade passage frequency as discussed above. 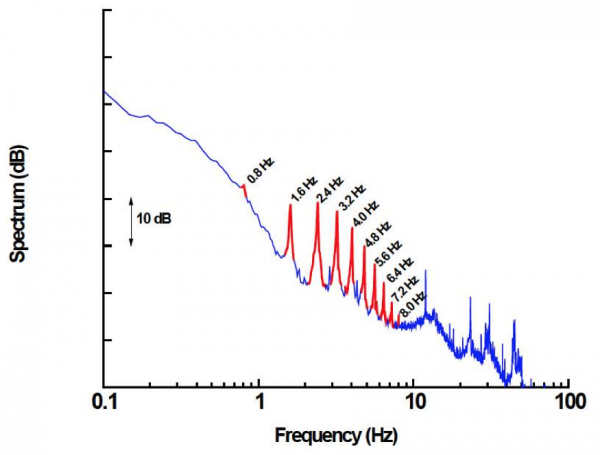 By comparison, Figure 4 shows what the microbarometer typically measures at the same distance during a sunny day (note that Figure 4 and Figure 3 are plotted on the same scale). The peaks characteristic of the wind turbines have dropped in level so much that they cannot be seen above the ambient background noise even though the turbines were in operation. Finally, we note that as the wind speed increases, both the ambient background noise levels and the wind turbine frequencies (when present) will change. 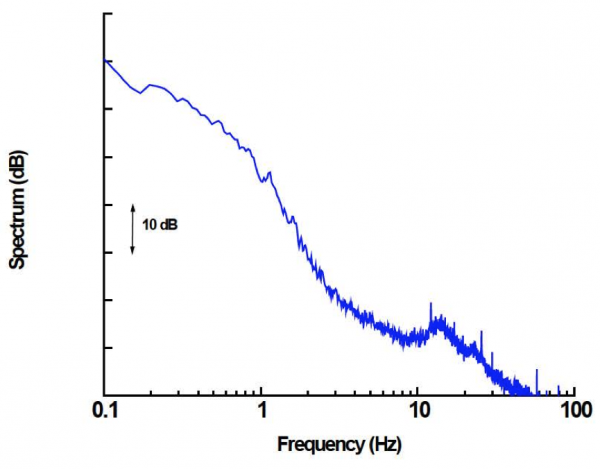 Levels measured by the microbarometers can be compared to theoretical predictions at different distances from the wind turbines by focusing on the characteristic wind turbine peaks. A comparison for the infrasonic frequency of 2.4 Hz is shown in Figure 5. The red circles are the average levels measured during several nights when there was an inversion and the microbarometers were downwind from the wind turbines. Using the temperature measured at heights of 2 m and 10 m, wind speed and wind direction measured at a height of I0 m at a distance of 2.5 km from the wind turbines, the computational models predict levels shown by the red line. The measured levels (circles) and the predicted levels (line) are in agreement at 2.5 km, 5 km, and 10 km. 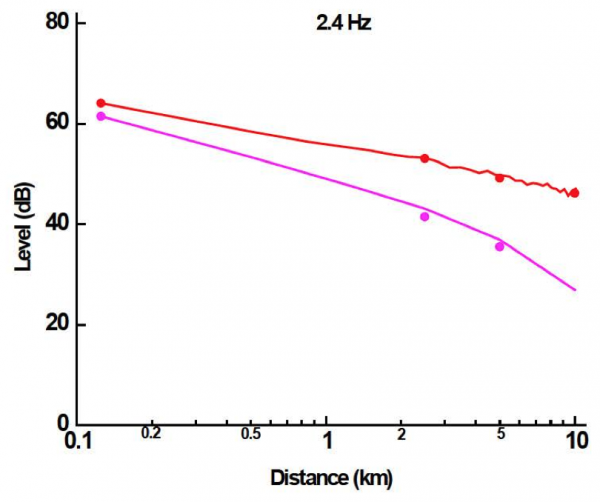 The magenta circles in Figure 5 are the levels at 2.4 Hz measured during an afternoon in July. For this daytime condition, the levels decrease much more rapidly as one moves away from the wind turbines, but can still be measured at 2.5 km and 5 km during this July afternoon. However, at 10 km, the microbarometer cannot measure the contribution from the wind turbines at this infrasonic frequency. The magenta line represents the predicted levels obtained using the weather station measurements. The measured levels and the predicted levels are in agreement at 2.5 km and 5 km.

The drop in levels seen in Figure 5 at 2.4 Hz was also seen at the other frequencies during the same weather conditions. For example, the red circles in Figure 6 are the average levels at a frequency of 30 Hz also measured during several nights when there was an inversion and the microbarometers were downwind from the turbines. Note that at 10 km, the microbarometer was not able to measure this frequency. The red line shows the predicted levels which agree with the measured levels at 2.5 km and 5 km. It was further found that it was not possible to separate wind turbine noise from the ambient background noise at frequencies above 30 Hz and at distances of 2.5 km and beyond. 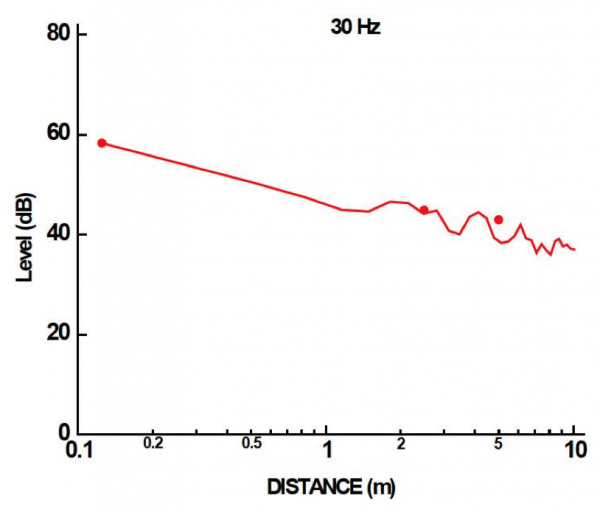 At distances over 1 km the 3 dB decrease in level for each doubling of distance is typical o flow frequency sound below 100 Hz during an inversion and/or downwind propagation and has been observed in other wind turbine noise studies. [At distances less than 1 km, the decrease in level when only one turbine is in operation will not be the same as when all four are in operation, for example.] For comparison, at frequencies above 100 Hz, the type of ground cover and air absorption become much more significant at affecting how sound levels decrease with distance. For example, traffic noise contains frequencies above 100 Hz. According to the calculation procedure of the ISO, traffic noise is expected to decrease by 7 to 8 dB for eve1y doubling of distance between 0.5 km and 2 km during a temperature inversion or downwind from the traffic.

One outcome of this study is a general idea of how often wind turbine noise below 100 Hz is likely to be measured up to a distance of 10 km. Weather observations published by Environment Canada were monitored for an entire year. The weather observations were classified in terms of wind speed and daytime and nighttime cloud cover. For example, in 2013 at one weather station, nighttime inversion conditions occurred about 45% of the time (or 3942 hours out of 8760 hours. Thus, taking into account wind speed and direction, infrasonic frequencies from wind turbines are likely be measured fairly often at distances up to10 km, and even beyond.