Witness Statement of S. Jane Davis in support of Friends of the South Pennines and the Todmorden Moor Restoration Trust. 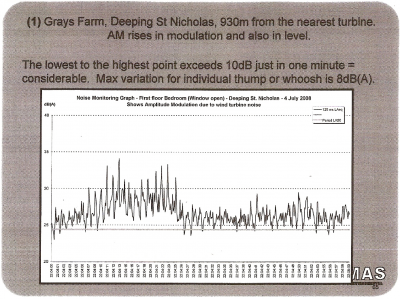 This slide illustrates the characteristic peak to trough trace of amplitude modulation recorded in the bedroom of our house in July of 2008. In terms of the severity of what we have suffered over the past two and a half years this level of modulation would rate as 6 on a scale of one to ten (where 1 is least and 10 is the worst)

The lowest to the highest point exceeds 10dB, and this is just in a period of 1 minute. The maximum variation for and individual thump or whoosh is 8dB (A).

Modulation generally occurs at a frequency of one beat per second.

2. The unsuitability of the LA90 (10min) Descriptor for measuring turbine noise pollution 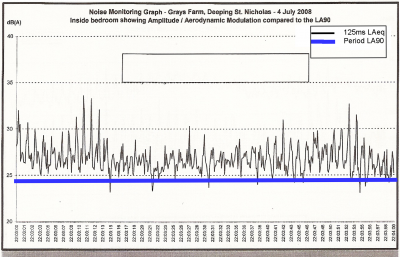 This is an illustration of the failure of the descriptor LA90 (10min) used under the guidance given from ETSU-R-97. The peak to trough range of modulating sound pressure waves produced by modern large turbines is far greater than that from the small to medium size turbines on which ETSU-R-97 was based. Consequently the larger peak to trough variation changes the characteristics of the sound and hence it is more noticeable and intrusive. The LA90 (10min) descriptor does not reflect this and therefore a substantial decibel penalty (10dB (A) or more) would be warranted to reflect the nature, or characteristic of the sound.

3. The failure of external background noise to mask turbine noise when experienced within a dwelling 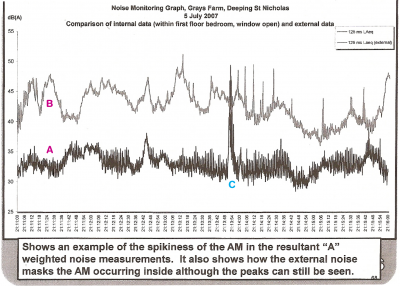 This slide shows sound measured from the turbines inside and outside our house simultaneously. The lower trace (A) is the internal measurement and shows the spiky peak to trough modulation. The upper trace (B) is the outside measurement and generally only records the upper part of the modulation due to masking from external noise sources (background noise). This shows that while a limited amount of masking does occur externally, internally the full modulation is experienced. The structure of the house significantly reducing the effect of any external background noise indicating a significant contribution to the turbine noise from lower frequency ranges. [Note, the spike at (C) is due to un-related internal noise.]