Stephen Ambrose and Robert Rand are members of the Institute of Noise Control Engineering. In 2009, they became concerned about the negative comments from residents living near wind turbine sites and, the apparent lack of regulatory action to address the potential for adverse health impacts from wind turbine generator noise in Mars Hill. They launched their own evaluation, and came to the following conclusions in a series of guest columns in the Knox County (Maine) Herald Gazette [click here for previous column].

Our sound measurement approach was developed from years of performing field studies working for Stone & Webster Engineering Corporation. We learned that it is imperative that sound measurements be witnessed first-hand, enabling us to use our ears to discriminate individual sounds and identify each contributing noise source.

The Freedom wind facility turbines started turning in the fall of 2008 and noise measurements from this site could have been used for reference for subsequent permitting applications at similar sites. The Vinalhaven permit noise analysis was submitted in April 2009, after the Freedom facility became operational. The results of our noise measurements and subsequent analysis raise this question: was the opportunity for evaluating the Freedom wind turbine sound emissions overlooked during the Vinalhaven application process?

Our measurement approach requires patience for selecting appropriate weather conditions, knowledge of field recording methods, sound propagation conditions and wind-relative position to the noise source under investigation. This enables us to isolate and measure only wind turbine sound levels and thereby, eliminating extraneous-sound contributions from wind and other noise sources. This optimizes the ability to use our measured sound levels, measurement locations, and atmospheric conditions to evaluate individual noise sources. Two important factors are: 1) the rate of sound level decrease with distance and, 2) the acoustic signature or time-energy content by frequency.

The sound levels measured at Freedom, with its three GE1.5MW wind turbines, could also be representative of a similar facility, such as on Vinalhaven. The sound produced by the GE1.5MW turbines was observed to noticeably change when the blade pitch or speed is adjusted during wind gusts. Blade-pass-related amplitude modulations (AM) were clearly audible and measurable out to a mile, currently the farthest distance evaluated in our surveys. The nearest wind turbine controls the noise level out to about 1,000 feet.

Wind turbines may sound similar to a jet plane that never lands as far away as 2,000 feet or more, with multiple wind turbines being audible. Further away, the sound spectrum lost the high frequency components due atmospheric absorption, and is dominated by frequencies below 1000 Hz. At one mile, most of the sound energy is below 200 Hertz. The 160 Hertz 1/3 octave band was found to be elevated when compared to adjacent bands. A thumping type sound was audible during our noise surveys, which is attributed noise contributions from multiple wind turbines.

Changes in sound level over relatively short periods of time can be annoying. The Maine Department of Environmental Protection recognizes these changes as “Short Duration Repetitive Sound” when the peaks exceed 6 dB and occur more than once an hour. The DEP states that the sound characteristics need only to be present and inherent to the process or operation of the development and are foreseeable. A 5 dB penalty is added to the measured dBA sound level when SDRS exists. We plotted our data for three turbines operating using fast meter response and the results are presented on the chart. Levels above the 6 dB line meet the definition for the presence of SDRS.

The presence of a pure tone frequency can also be annoying even at low sound levels, as we have experienced with older fluorescent light fixtures. The GE1.5MW turbines were found to have a strong frequency component in the 160 Hz band (1/3rd). Using the DEP definition for tonal sound, for the 160 Hz frequency band (1/3rd), a tonal sound exists when the there is a difference of 8 dB or more higher than the average of the adjacent bands. When tonal sound exists, the DEP applies a 5 dB penalty added to the measured dBA sound level. We plotted our data for three turbines operating using fast meter response and present the results on the two charts. The first chart shows the potential for a tone in 160 Hz band. The second chart shows the tone level difference related to time. The 160 Hz band tone varies considerably in level from 0 to 14 dB or up to 6 dB above the tonal sound definition.

Our data shows presence of SDRS and tonal sound occurring numerous times within a five-minute interval, which also would be representative of longer periods. These conditions are found to be inherent with the GE1.5MW wind turbine operation and, therefore are considered foreseeable.

The DEP regulation recognizes the increase in annoyance caused by SDRS and tonal sound and applies penalties to the measured dBA sound level. The penalties are 5 dB for each annoyance condition. The DEP compliance determination would require adding up to 10 dBA (5+5) to the measured (or predicted) dBA sound levels. This would mean that a measured (or predicted) 1-hr Leq of 35 dBA would now be 45 dBA; a measured 1-hr Leq of 45 dBA is adjusted to 55 dBA, and so on.

We plotted our measured Freedom sound levels versus distance. We superimposed trend lines for our data and included the MeDEP 45 dBA nighttime noise limit. Also shown is the trend line for the adjusted sound level when the SDRS (5 dB) and Tonal Sound (5 dB) penalties are applied (10 dB total). 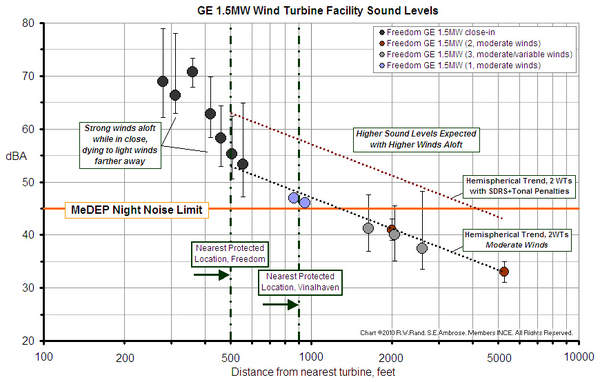 We have maintained that the reported public response was far worse than the wind turbine noise models predict. People are excellent human-response indicators for commenting on noticeable changes in noise level and are sensitive to changes in sound character. As investigators, we tend to question noise level predictions when there is an elevated level of public annoyance compared to the predicted noise level and public response. Would it have been appropriate to have developers adequately research the sound character produced by wind turbines related to annoyance? Are there drawbacks for averaging sound levels? Would the licensing requirements be different if these penalties were applied?

This type of graph could have been used to verify noise prediction models at residential positions using distance and, determine DEP compliance at “protected locations” (residential property lines or as defined by Maine Site of Location law section 375.10). It is apparent that these facilities can exceed the DEP nighttime noise limit at residences as far away as 4,000 feet during moderate wind conditions. We expect the wind turbines to be noticeably louder with higher wind speeds.

Now that we’ve walked you through some fairly dense technical jargon and analysis, take time to think about the information we have presented, specifically the upper trend line adjusted for SDRS and tonal sound. The analysis of the sound emissions measured at Freedom reveals that industrial GE1.5MW wind turbines can exceed the DEP nighttime noise limits out to 4,000 feet and farther with stronger winds aloft. Are the currently used setback distances appropriate for DEP permitting?

Currently, wind turbine site permit applications may not adequately assess for SDRS and tonal sound. This is more likely due to the applicants use of averaged noise levels or by referring to manufacturer’s data. It is important to understand that people do not hear an hourly leq (average): ears respond very quickly, so the fast meter response may be more appropriate than averaging for determining the presence of SRDS and tonal sound.

Technical note: SDRS and tonal sound analyses are based on numeric computations that represent human hearing and coincide with the fast-response sound level setting. Longer averaging reduces and obscures the sound level variations.