A primary input is the “ground factor” set to address conditions on the ground, the ground effect, between the noise source and the receptor:

Ground attenuation, Agr, is mainly the result of sound reflected by the ground surface interfering with the sound propagating directly from source to receiver.

While there may be some reflected sound reaching the “receptor” (that is such an obnoxious term for people!), the sound from a wind turbine with a hub height of 300 feet or more! That’s a direct path to the “receptor.” The ground, grasses, corn, trees, buildings, do not get in the way. 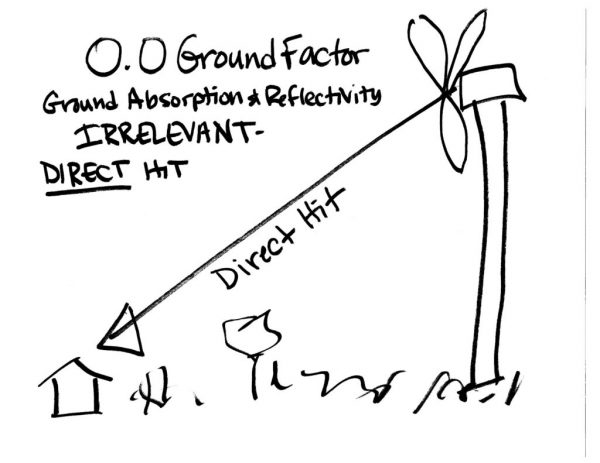 The ground factor to be used for wind turbines is ZERO.

The use of a 0.0 ground factor for wind is standard practice, and that a 0.5 ground factor is NOT appropriate for wind because it’s elevated. This was inadvertently confirmed by Applicant’s Mike Hankard in the Badger Hollow solar docket, also in Wisconsin (PSC Docket 9697-CE-100):

The model that we use has been shown to predict conservatively with 0.5. I mean, 0.5 ground factor is used in probably – well, with the exceptiion perhaps of wind turbine projects which are different because the source is elevated. But for projects like a typical power plant, a solar plant where the sources are relatively close the ground, I would say 90 to 99 percent of the studies use 0.5. And when consultants like myself go out ad measure these plants after they’re cpmnstricted tp verify our modeling assumptions, that assumption checks out as being, if anything, overpredicting the levels. So there’s no need to – there would be no justification to use something like a .2 or .3 which would predict yet higher levels because we’re already demonstrating that the model is probably overpredicting. So that would not be justified for those reasons.

Who cares? Well, it’s bad enough that in that WI PSC Highland Wind docket, when the applicants couldn’t comply with the state’s wind noise limit, they redid their noise “study” using the inappropriate ground factor of 0.5 to give them more compliant numbers – they moved the goal posts, garbage in, garbage out. They think they can do that in Minnesota too, and are trying oh so hard in the Freeborn Wind docket (PUC Docket 17-410).

Last September, 2018 that is, Freeborn Wind did a deal with Commerce, admitted to in its “Request for Clarification/Reconsideration” pleading:

Freeborn Wind requests the Commission clarify its Site Permit to adopt Section 7.4, as proposed by Freeborn Wind and agreed to by the Department and MPCA, in place of the current Sections 7.4.1 and 7.4.2, to both ensure consistency with the Order and avoid ambiguity in permit compliance.

Freeborn Wind’s September 19, 2018, Late-Filed proposal for Special Conditions Related to Noise outlines the agreement reached between Freeborn Wind, the Department and the MPCA on this issue.

In this deal, they put language in the permit that was a fundamental shift in noise monitoring, one for which there is no justification under the noise modeling standards, whether state or ISO 9613-2 – that of using a 0.5 ground factor.

The language in the proposed special conditions requires Freeborn Wind to submit updated modeling and/or proposed mitigation demonstrating that modeled wind turbine–only noise will not exceed 47 db(A) L50-one hour at receptors. Specific guidance is included regarding the modeling assumptioins to be used. Specifically, proposed Section 6.1 directs Freeborn Wind to follow the NARUC ISO 9613-2 standard with a 0.5 assumed ground factor. As reflected in the special condition language, setting a turbine-only noise limit at 47 dB(A), using the specified model assumptioins, ensures that the Project will not cause or significantly contribute to an exceedance of the MPCA Noise Standards. This limit is supported in this record by expert testimony from Mr. Mike Hankard and the MPCA’s 2015 Noise Guide, both stating the 3 dB(A) is the generally recognized minimum detectable change in environmental noise levels. To illustrate, when nighttime background sound levels are at 50 db(A) L50-one hour, a maximum turbine-only contribution of 47 db(A) L50-one hour would result in a non-significant increase in total sound of less the 3 dB(A).

The day before the Commission’s meeting, they filed for a “Special Condition,” and oh, was it special:

At the meeting, they presented a chart with made up numbers on it, not supported by any noise study: 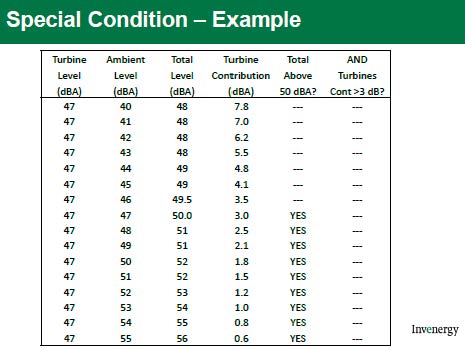 This chart was shown for a few seconds at most, it was not provided in the “Late Filing” above, and there were no copies for parties or the public. Did Commissioners get a copy? Who knows …

The Commission then granted the site permit! There were a few rounds before we got to where we are today, with Xcel Energy acquiring the project, and with a new site plan, bigger turbines, and some specific site permit amendments. In its permit amendment application, Xcel Energy is now the owner of Freeborn Wind, and Xcel wants to use larger Vestas V120 turbines rather than the V116.

From testimony in the original Freeborn Wind hearing, and in an Affidavit submitted by Commerce-EERA’s Davis:

In its permit amendment application, Xcel Energy is now the owner of Freeborn Wind, and Xcel wants to use larger turbines. In so doing, they have filed a noise study, Attachment E, utilizing that 0.5 ground factor. Xcel’s claim is that they’re using a 0.5 ground factor because the permit specifies that:

This Xcel filing is the first noise study in the Freeborn Wind record to utilize a 0.5 ground factor.

This Xcel filing is the first noise study in the Freeborn Wind record following the ALJ’s recommendation of denial:

The Administrative Law Judge concludes that Freebron Wind has failed to demonstrate that the proposed Project will meet the requirements of Minn. R. 7030.0040, the applicable Minnesota Noise Standards. Therefore, the Administrative Law Judge respectfully recommends that the Commission either deny Freeborn Wind’s Application for a Site Permit, or in the alternative, provide Freeborn Wind with a period of time to submit a plan demonstrating how it will comply with Minnesotat’s Noise Standards at all times throughout the footprint of the Freeborn Wind Project.

There’s a 3 dB(A) margin of error – even using Hankard’s numbers, look at the yellow lines right up against the homes, and look at the blue 50 dB(A) lines and how many homes are inside of those lines: 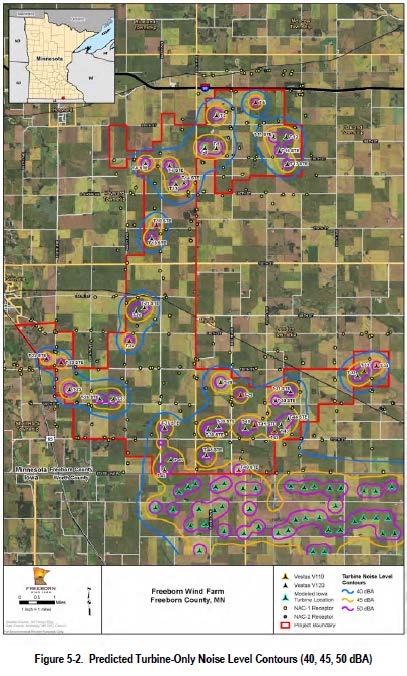 Turbine noise at the hub for the V120s can be maximum of 110.5 dB(A), and serrated edges provide an option to reduce noise (which Xcel says it plans on using for some turbines), per the Vestas spec sheet.

Compliance? Modeling with the improper 0.5 ground factor doesn’t come close to demonstrating compliance, instead it demonstrates a high probability of non-compliance. It demonstrates that using the proper ground factor for wind, it won’t do the modeling, likely (assuredly) because the project cannot comply. Freeborn Wind could not demonstrate that it could comply with state noise standards as originally designed with the smaller wind turbines and the proper modeling ground factor, and now Xcel Energy wants to use larger turbines. Larger turbines are noisier … once more with feeling:

And now we see, hot off the press, the Plum Creek wind project (PUC Docket WS-18-700), proposed by Geronimo …

They have provided a noise study, BUT, much is NOT PUBLIC:

And I wonder why … well, it says that they’re not using a ground factor of 0.0. Look at p. 48 of the sound study above, deep breathe and take a peek:

For this analysis, we utilized a ground factor of G=0.7, which is appropriate for comparing modeled results to the L50 levels. A 2-dB uncertainty factor was added to the turbine sound power per typical manufacturer warranty confidence interval specifications.

Generally accepted wind turbine modeling procedure calls for a ground absorption factor of G=0.5, with a 2-dB uncertainty factor added to the manufacturer’s guaranteed levels, to predict a maximum LEQ(1-hr). In this case the state limit utilizes and L50 metric instead of maximum LEQ(1-hr), which means a ground factor of G=0.7 can be used.

How stupid do they think we are?

How stupid do they think Commerce-EERA is? … oh … never mind …

Anyway, here are the sound study maps based on that bogus 0.7 ground factor – look how many homes are affected: 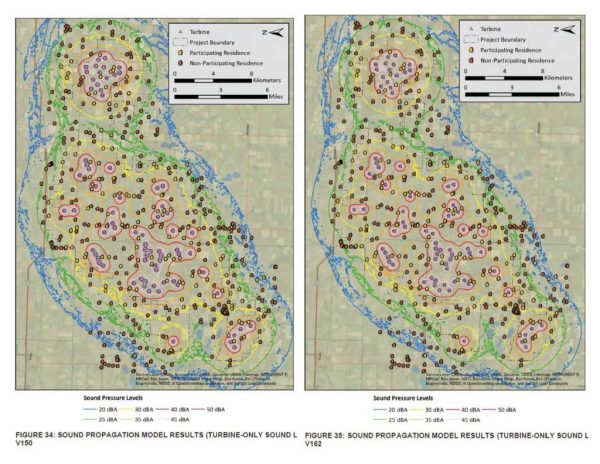 Geronimo gets the gong:

At least twice in the Freeborn record I have asked whether the Commissioners understand “0.5 ground factor” and “0.0 ground factor” and have been vigorously assured that yes, they do understand. And Commerce-EERA staff? You’re responsible for doing the footwork on these siting applications. Do you understand?

If they do not understand, or misunderstand, they’ve got some learnin’ and edumacation to do. If they DO understand, and are approving site permits knowing that the modeling is off, that ground factor is misused, they’re complicit. They’re knowingly afflicting those who have to live with the noise sound levels that exceed Minnesota state standards.

As we saw in Bent Tree, where the noise standard compliance is in question, it is Commerce’s job to do the noise monitoring and deal with the problem. Once a turbine is up, there aren’t many options other than “shut down the turbines” or “buy out the landowners.” How many landowner buy-outs do you think we need before it’s admitted there’s a problem? Why is it so hard to develop responsible, precautionary, and respectful siting? Why is there resistance? The costs of their failure to do so are … well … we may see exactly what those costs are.

Commissioners and Commerce staff, make sure you know how the state noise standard and ISO 9613-2 was designed, how it is to be used, and what ground factor means.

If you know what it means, and are siting turbines using 0.5 and 0.7, you are responsible.