The Global Wind Energy Council recently released its latest report, excitedly boasting that ‘the proliferation of wind energy into the global power market continues at a furious pace, after it was revealed that more than 54 gigawatts of clean renewable wind power was installed across the global market last year’.

You may have the impression from announcements like that, and from the obligatory pictures of wind turbines in any New York Times story, that wind power is making a big contribution to world energy today.

You would be wrong. Its contribution is still, after decades – nay centuries – of development, trivial to the point of irrelevance. Even after 30 years of huge subsidies, wind power provides only slightly more than zero energy to the world.

Even put together, wind and photovoltaic solar are supplying less than 1 per cent of global energy demand.

From the International Energy Agency’s 2016 Key Renewables Trends, we can see that wind provided 0.46 per cent of global energy consumption in 2014, and solar and tide combined provided 0.35 per cent. Remember this is total energy, not just electricity, which is less than a fifth of all final energy, the rest being the solid, gaseous, and liquid fuels that do the heavy lifting for heat, transport and industry. 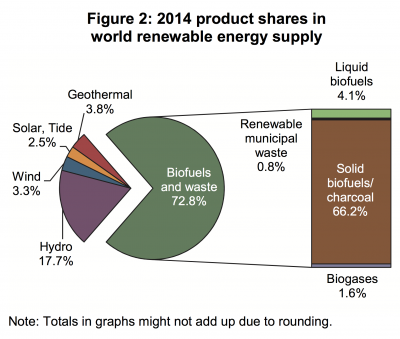 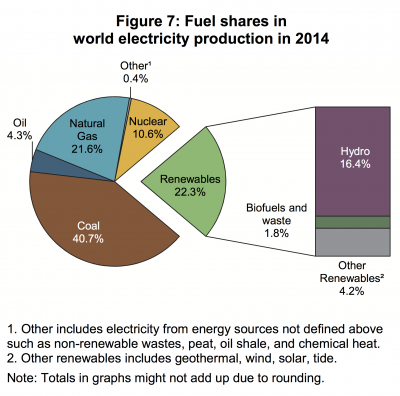 Such numbers are not hard to find, but they don’t figure prominently in reports on energy derived from the Unreliables Lobby (solar and wind). Their trick is to hide behind the statement that close to 14 per cent of the world’s energy is renewable, with the implication that this is wind and solar.

In fact the vast majority – three quarters – is biomass (mainly wood), and a very large part of that is ‘traditional biomass’: sticks, logs, charcoal and dung burned by the poor in their homes to cook with. Those people need that energy, but they pay a big price in health problems caused by smoke inhalation.

Even in rich countries playing with subsidized wind and solar, a huge slug of their renewable energy comes from wood and hydro, the reliable renewables.

Meanwhile, world energy demand has been growing at about 2 per cent a year for nearly 40 years. Between 2013 and 2014, again using International Energy Agency data, it grew by just under 2,000 terawatt-hours.

If wind turbines were to supply all of that growth but no more, how many would need to be built each year? The answer is nearly 350,000, since a two-megawatt turbine can produce about 0.005 terawatt-hours per annum. That’s one-and-a-half times as many as have been built in the world since governments started pouring taxpayer money into this so-called industry in the early 2000s.

At a density of, very roughly, 50 acres per megawatt, typical for wind farms, that many turbines would require a land area half the size of the British Isles, including Ireland (61,000 sq mi). Every year.

If we kept this up for 50 years, we would have covered every square mile of a land area half the size of Russia with wind farms (3.05 million sq mi).

Remember, this would be just to fulfill the new demand for energy, not to displace the vast existing supply of energy from fossil fuels, which currently supply 80 per cent of global energy needs.

Further, the Unreliables Lobby cannot take refuge in the idea that wind turbines could become more efficient. There is a limit to how much energy you can extract from a moving fluid, the Betz limit, and wind turbines are already close to it.

And more: wind turbine effectiveness (the load factor, to use the engineering term) is determined by the wind that is available, and that varies at its own sweet will from second to second, day to day, year to year.

As machines, wind turbines are pretty good already; the problem is the wind resource itself, and we cannot change that. It’s a fluctuating stream of low–density energy. Mankind stopped using it for mission-critical transport and mechanical power long ago, for sound reasons. It’s just not very good. How much global cargo is shipped by sailing ships these days?

But out of sight and mind is the dirty pollution generated in Inner Mongolia by the mining of rare-earth metals for the magnets in the turbines. This generates toxic and radioactive waste on an epic scale, which is why the phrase ‘clean energy’ is such a sick joke and greenie politicians should be ashamed every time it passes their lips.

Wind turbines, apart from the fiberglass blades, are made mostly of steel, with concrete bases. They need about 200 times as much material per unit of capacity as a modern combined cycle gas turbine. Steel is made with coal, not just to provide the heat for smelting ore, but to supply the carbon in the alloy. Cement is also often made using coal. The machinery of ‘clean’ renewables is the output of the fossil fuel economy, and largely the coal economy.

A two-megawatt wind turbine weighs about 250 metric tons, including the tower, nacelle, rotor and blades. Globally, it takes about half a ton of coal to make a ton of steel. Add another 25 tons of coal for making the cement and you’re talking 150 metric tons of coal per turbine.

Now if we are to build 350,000 wind turbines a year (or a smaller number of bigger ones), just to keep up with increasing energy demand, that will require 50 million metric tons of coal a year more than being mined now. That’s about half the EU’s hard coal–mining output.

The point of running through these numbers is to demonstrate that it is utterly futile, on a priori grounds, even to think that wind power can make any significant contribution to world energy supply, let alone to emissions reductions, without ruining the planet. As the extraordinary polymath Sir David MacKay pointed out, the arithmetic is against such unreliable renewables.

MacKay, former chief scientific adviser to the Department of Energy and Climate Change, said in the final interview before his tragic death last year that the idea that renewable energy could power the UK is an “appalling delusion” – for this reason: that there is not enough land.

The truth is, if you want to power civilization with fewer greenhouse gas emissions, then you should focus on shifting power generation, heat and transport to natural gas, the economically recoverable reserves of which – thanks to horizontal drilling and hydraulic fracturing – are much more abundant than we dreamed they ever could be.

It is also the lowest-emitting of the fossil fuels, so the emissions intensity of our wealth creation can actually fall while our wealth continues to increase.

And let’s put some of that burgeoning wealth in nuclear, fission and fusion, so that it can take over from gas in the second half of this century. That is an engineerable, clean future.

Everything else is a political displacement activity, one that is actually counterproductive as a climate policy and, worst of all, shamefully robs the poor to make the taxpayer-subsidized crony-rich even richer.

Matt Ridley is the author of The Rational Optimist, and as 5th Viscount Ridley is a Member of the British House of Lords. The Utter Complete Total Fraud of Wind Power originally appeared at To The Point News.

Additional notes by commenters at http://rodmartin.org/utter-complete-total-fraud-wind-power/

[B]ecause a large proportion of the energy coming out of a windmill is coming out in short burst, it requires an inordinately large hook-up power line to be able to carry very high peak capacity while the average capacity is very low. It’s akin using a 10 tons truck to go buy a quart of milk. Warmageddonists were the first to rant against using a Hummer as daily transportation. Well, windmills are the Hummers-for-getting-a-quart-of-milk of power generation.

AND – it does not even make any allowance for the terrible environmental damage to the sites during construction of each turbine and the continuing eyesore of each power easement.

AND – it makes no allowance for removal of obsolete towers.

BUT – Because the efficiency of any wing device improves with increases in the aspect ratio (L/W) the blades are getting longer and longer. Therefore the use of high-strength, lightweight materials is required; therefore the wind turbine has been a great source money (both R&D and production) for the composites industry.