Texas Power Challenge: Getting the Most from Your Energy Dollars 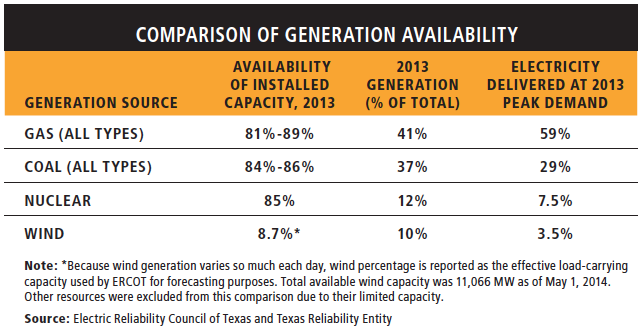 Natural gas generation contributes the largest share of Texas electricity, particularly during peak demand. During off-peak times, when demand can be a half or two-thirds of the daily peak, many power plants stand idle; operating reserves are needed, however, when demand increases again, or to react to sudden losses of generation or transmission problems caused by equipment failure or bad weather.

On days when temperatures peak in the 60s, non-residential customers use more than two-thirds of the power generated in the ERCOT region. On the hottest Texas summer days, electricity demand by residential customers quadruples to more than half of the state’s total load, peaking in the late afternoon. This requires thousands of megawatts of natural gas generation to be fired up, a flexibility not available with wind generation that is dependent on weather conditions.

Diversifying Texas’ energy portfolio has put wind and solar generation on the grid but has created a new quandary for grid managers: where can power be obtained quickly when the wind stops or clouds reduce solar yields?

Wind generation is lowest during the summer months when energy demand is highest. 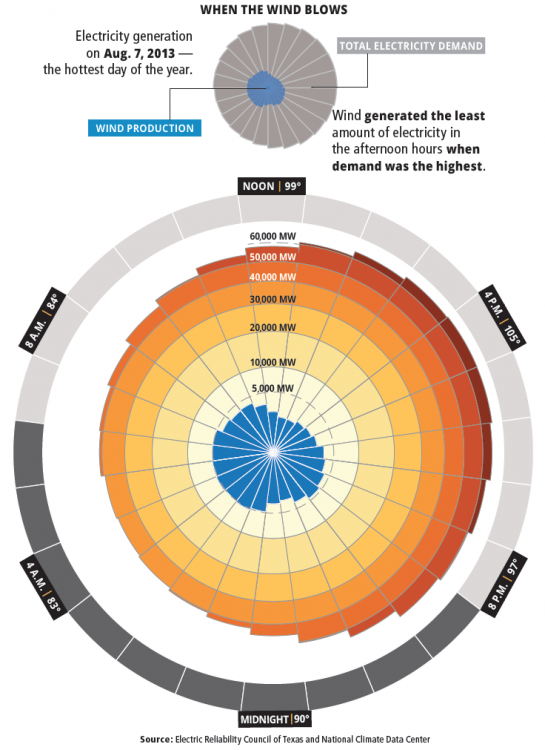 The proportion of electricity generated from wind during the hottest summer day of 2013:

Renewable energy poses reliability challenges. The leading concern is whether it can provide electric power every second of every day. Major renewable energy sources are fundamentally limited in how, where and when they can be used; the sun doesn’t always shine and the wind doesn’t always blow, so natural gas backup generation is needed.

Historical wind generation data reveal that the peak production for the majority of Texas wind generation is at night and does not align well with the peak electricity demand during summer afternoons.

The 2005 Texas Legislature approved a major transmission project, the Competitive Renewable Energy Zones (CREZ), to carry mostly wind energy generated in West Texas and the Panhandle to high-demand cities. The project was forecast to cost less than $5 billion but ballooned to more than $6.9 billion to build nearly 3,600 miles of transmission lines and dozens of substations.

The completed project has capacity to transmit about 18,500 MW of electricity to major load centers in ERCOT – that would serve more than 4 million Texas homes.

Consumers will pay for CREZ lines carrying wind energy for 15 to 20 years. The PUC estimates residential customers will pay roughly $5 to $7 per 1,000 kWh used. Based on the average household’s electricity use, that will cost $70 to $100 per year. An ERCOT official told the PUC in August 2014 that further expansion of the West Texas transmission grid could cost an additional $2 billion.

An ERCOT study is under way to provide new and improved transmission from Panhandle wind generation that extends outside its service area. The Panhandle Renewable Energy Zone could provide transmission lines (expanded from the existing CREZ) that would transport electricity to the populated areas of Texas where demand is increasing. No price tag has been identified for these new transmission lines.

The PUC has begun to study whether future transmission infrastructure costs should continue to be paid by all ratepayers or whether electricity generators – specifically renewables that are located far from where the energy is used – should be required to fund any of the costs. 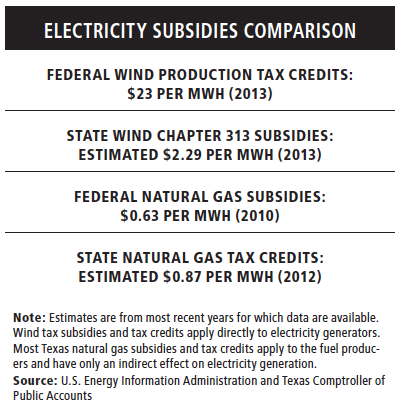 Download original document: “Texas Power Challenge: Getting the Most from Your Energy Dollars”