Abstract —
The global drive to produce low-carbon energy has resulted in an unprecedented deployment of onshore wind turbines, representing a significant land use change for wind energy generation with uncertain consequences for local climatic conditions and the regulation of ecosystem processes. Here, we present high-resolution data from a wind farm collected during operational and idle periods that shows the wind farm affected several measures of ground-level climate. Specifically, we discovered that operational wind turbines raised air temperature by 0.18°C and absolute humidity (AH) by 0.03 g/m³ during the night, and increased the variability in air, surface and soil temperature throughout the diurnal cycle. Further, the microclimatic influence of turbines on air temperature and AHd ecreased logarithmically with distance from the nearest turbine. These effects on ground-level microclimate, including soil temperature, have uncertain implications for biogeochemical processes and ecosystem carbon cycling, including soil carbon stocks. Consequently, understanding needs to be improved to determine the overall carbon balance of wind energy. 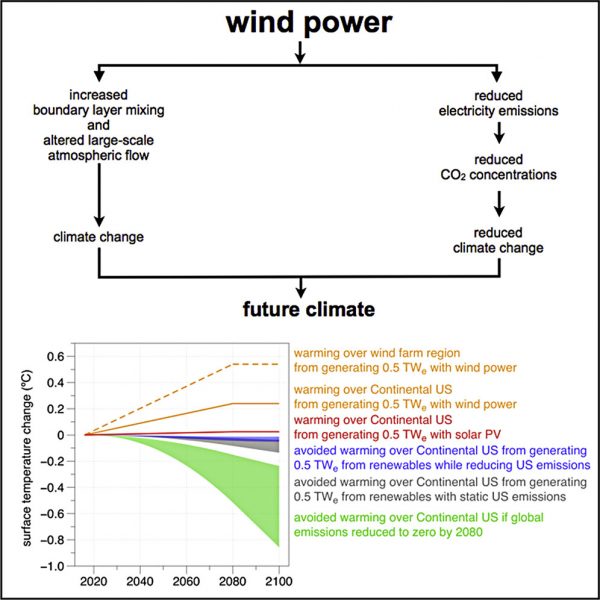 Abstract:
Simulation and modeling have shown that wind farms have an impact on the near‐surface atmospheric boundary layer as turbulent wakes generated by the turbines enhance vertical mixing. While a few observational data sets that focus on near‐surface temperature changes exist, these studies lack high spatial resolution and neglect the combined effect of these temperature changes with an altered humidity profile. With a large portion of wind farms hosted within an agricultural context, changes to relative humidity can potentially have secondary impacts, such as to the productivity of crops. The goal of this study is to gather high‐resolution in situ field measurements in the wake of a single wind turbine in order to differentially map downstream changes to relative humidity. These measurements, obtained by an instrumented unmanned aerial system, are complemented by numerical experiments conducted using large‐eddy simulation. Observations and numerical results are in good general agreement around a single wind turbine and show that downstream relative humidity is differentially altered in all directions, specifically decreased below the turbine hub height. Large‐eddy simulation is then used to determine the effect of a large 7 × 4 turbine array on the relative humidity distribution in compounding wakes. It is found that the region of relative humidity decrease below the turbine hub height and the region of increase above the hub height both intensify, differentially extend in the lateral directions, and moves lightly upward with downstream distance.

Abstract:
Wind farms (WFs) can affect the local climate, and local climate change may influence underlying vegetation. Some studies have shown that WFs affect certain aspects of the regional climate, such as temperature and rainfall. However, there is still no evidence to demonstrate whether WFs can affect local vegetation growth, a significant part of the overall assessment of WF effects. In this research, based on the moderate-resolution imaging spectroradiometer vegetation index, productivity and other remote-sensing data from 2003 to 2014, the effects of WFs in the Bashang area of Northern China on vegetation growth and productivity in the summer (June–August) were analyzed. The results showed that: (1) WFs had a significant inhibiting effect on vegetation growth, as demonstrated by decreases in the leaf area index, the enhanced vegetation index, and the normalized difference vegetation index of approximately 14.5%, 14.8%, and 8.9%, respectively, in the 2003–2014 summers. There was also an inhibiting effect of 8.9% on summer gross primary production and 4.0% on annual net primary production coupled with WFs; and (2) the major impact factors might be the changes in temperature and soil moisture: WFs suppressed soil moisture and enhanced water stress in the study area. This research provides significant observational evidence that WFs can inhibit the growth and productivity of the underlying vegetation.