Abstract: The increasing number and size of wind farms call for more data on human response to wind turbine noise, so that a generalized dose-response relationship can be modeled and possible adverse health effects avoided. This paper reports the results of a 2007 field study in The Netherlands with 725 respondents. A dose-response relationship between calculated A-weighted sound pressure levels, and reported perception and annoyance was found. Wind turbine noise was more annoying than transportation noise or industrial noise at comparable levels, possibly due to specific sound properties such as a “swishing” quality, temporal variability, and lack of nighttime abatement. High turbine visibility enhances negative response, and having wind turbines visible from the dwelling significantly increased the risk of annoyance. Annoyance was strongly correlated with a negative attitude toward the visual impact of wind turbines on the landscape. The study further demonstrates that people who benefit economically from wind turbines have a significantly decreased risk of annoyance, despite exposure to similar sound levels. Response to wind turbine noise was similar to that found in Sweden, so the dose-response relationship should be generalizable. 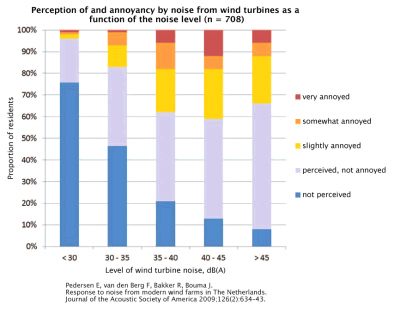 Download original document: “Response to noise from modern wind farms in The Netherlands [2]”