No emission reduction gained from increasing wind and solar

I continued my ongoing analysis of electric generation in the PJM regional grid where Delaware is a participant. I wanted to share the results of how much wind and solar power was generated in the region from 2019 to 2021.

From 2019 to 2021, wind and solar power generation increased by 30% but had no impact on carbon dioxide emissions (CO₂).

PJM is the largest regional grid in the country, serving 65 million people in thirteen mid-Atlantic and Midwestern states generating 22% of US electricity. Emissions did fall 0.8% over the period but were entirely due to an almost one-to-one replacement of high-emission coal with lower-emission natural gas.

This is a huge failure since emissions reduction is the only purpose of the rush to use more wind and solar-powered generation. These power sources are poor technologies no one would use without permanent government mandates, massive subsidies, and punishing taxes on carbon-based fuels that add $1 billion a year in power cost just in PJM.

Most wind generation occurs when it is least needed, and most solar generation occurs in about 6 hours a day, and both are very intermittent with wide seasonal variation. They are also non-recyclable, have one-third to one-half the productive life spans of alternative power sources, and take up a lot of ground.

Why are we using wind and solar if it doesn’t reduce CO₂ emissions?

An 8.1 million megawatt-hour (MWh) increase in wind and solar power generation replaced a 6.8 million MWh decline in zero-emission nuclear and hydroelectric power and covered a 1.3 MWh increase in PJM demand. Most of the decline in nuclear power resulted from the closure of the last Three Mile Island generating unit. Nuclear power plants are not competing well against subsidized wind power.

On average natural gas emits about 40% of the CO₂ as coal for each MWh generated. However, coal plants are not designed to start and stop efficiently.

The chart below shows a curve of how emission rates rise as much as double as generation rates fall. 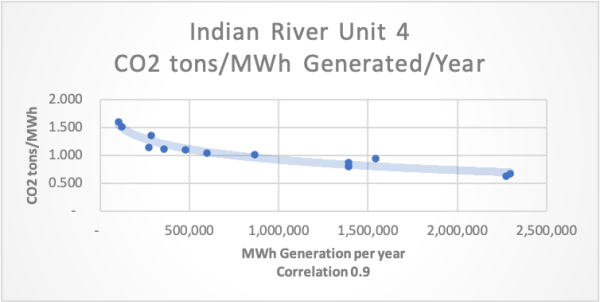 The results of my analysis are surprising as past studies of emission reductions by the US Energy Information Agency show falling electric industry emission rates could be attributed only about 68% to fuel switching to natural gas while new wind and solar impacted the rest. The use of high emission electric generation fuels has fallen 63% since 2005.

We may be seeing a new era where expanding wind and solar generation is routinely more likely to replace zero and low-emission power sources as they displace high emission sources. If that is the case, it may be time to end wind and solar mandates and subsidies.