[Abstract] The detailed analysis of a series of acoustic measurements taken near several large wind turbines (100 kW and above) has identified the maximum acoustic energy as being concentrated in the low-frequency audible and subaudible ranges, usually less than 100 Hz. These measurements have also shown any reported community annoyance associated with turbine operations has often been related to the degree of coherent impulsiveness present and the subsequent harmonic coupling of acoustic energy to residential structures. Thus, one technique to assess the annoyance potential of a given wind turbine design is to develop a method which quantifies this degree of impulsiveness or coherency in the radiated acoustic energy spectrum under a wide range of operating conditions. Experience has also shown the presence of annoying conditions is highly time dependent and nonstationary, and, therefore, any attempts to quantify or at least classify wind turbine designs in terms of their noise annoyance potential must be handled within the proper probabilistic framework. A technique is described which employs multidimensional, joint probability analysis to establish the expected coincidence of acoustic energy levels in a contiguous sequence of octave frequency bands which have been chosen because of their relationship to common structural resonant frequencies in residential buildings. Evidence is presented to justify the choice of these particular bands. Comparisons of the acoustic performance and an estimate of the annoyance potential of several large wind turbine designs using this technique is also discussed.

Figure 1 summarizes the acoustic pressure spectrum associated with large wind turbines and indicates the dominate noise sources as a function of frequency. Not all wind turbines will exhibit the features of the spectrum shown. The ultimate cause of aerodynamically generated sound is the unsteady loading of the blades. The degree of this un- steadiness, for the most part, is responsible for the distribution of acoustic energy across the spectrum of Fig. 1. 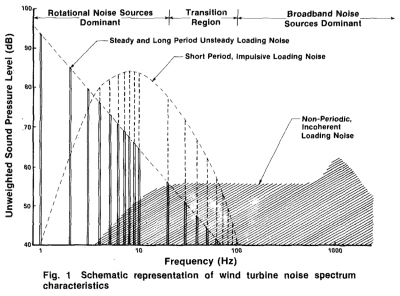 Conventional classifications of rotor noise include rotational, broadband or vortex, and impulse noise. Rotational noise is characterized by the large number of discrete frequency bands which are harmonically related to the blade passage frequency. The amplitude of these bands is determined by the sum of the steady load, which is a function of the commanded level of operation of the machine, and the unsteady loading at any moment arising from such sources as inflow turbulence and upstream wakes. Broadband or vortex noise results from the slightly viscous interaction of the unsteady lift and the blade boundary layer and is responsible for such mechanisms as flow separation and tip-and trailing’ edge vortex shedding. Broadband noise, which is described as the “swishing” sound associated with the turbine operation, is characterized by largely incoherent radiation over a wide frequency range with a spectral “hump” sometimes found at relatively high frequencies. Recent measurements of the MOD-2 turbine have found just such a “hump” in the region shown in Fig. 1. Impulsive noise, such as has been found with the MOD-1, is identified with short, transient fluctuations in the radiated acoustic field which can contain considerable energy. The dashed lines in the region transcending the rotational and broadband regions of the spec- trum in Fig. 1 are indicative of impulsive behavior and reflect the very large number of harmonics necessary to describe the blade loading spectrum which are the sources of the radiation. Impulsive noise tends to be the most annoying because it dominates all other sources due to a high degree of coherence and radiation efficiency. From Fig. 1, the highest levels of acoustic energy can be seen to reside in the low-frequency and subaudible (<20 Hz) ranges in the form of discrete bands. The presence of short period, unsteady blade loads will in- crease the amount of discrete radiation in the higher rotational harmonics, usually peaking in the 8-15 Hz range. Low Frequency Sound. The low frequency dominated spectrum of Fig. 1 is a result of the low rotational speed of wind turbines as compared with other forms of turbine machinery. At the present time no adequate standard exists for evaluating impulsive noise, particularly when the sound energy is concentrated below 100 Hz. This gap is due to our limited knowledge of the psychological response and the physical parameters involved with transient sounds which are perceived by humans as annoyance. As part of their program to develop a proposal for wind turbine noise criteria, the psychoacoustics group at the NASA Langley Center has performed a series of tests to establish the perception threshold for low-frequency audible, impulsive-type sounds. Their results are reported in reference [1].

During our March 1980 field measurement program at the MOD-1, we were very fortunate to obtain permission from two very cooperative families living near the machine (who had a history of complaints) to make a series of detailed acoustic and vibration measurements inside and outside of their homes during turbine operations. In addition to the physical measurements, we visited many of the other complaining families and received a description of the annoying sounds. In summary, the complaints centered on the following perceptions:

(i) the annoyance was described as a periodic “thumping” sound accompanied by vibrations;

(ii) many persons reported they could “feel” more than hear the sounds;

(iii) the sounds were louder and more annoying inside their homes than out; and

(iv) some experienced the rattle of a loose glass in picture frames mounted on outside walls and small objects such a perfume bottles atop furniture making contact with an inside wall.

In our visits to other complaining homes, we asked in which room the occupants believed the sounds were the most an- noying. Without fail, we were shown rooms which had at least one window which faced the turbine. More often than not, the room was a smaller one, usually a bedroom. …

Human Perception. … We hypothesize one of the causal factors related to the annoyance associated with the pulsating pressure fields in the rooms measured is a coupling with human body resonances which in turn are responsible for creating the sensation of a whole-body vibration. This perception is more noticeable indoors due to the increased reverberation time and dynamic overpressures from the interaction between the structural and air volume resonances. From the meager information available from our measurements, we have crudely estimated the perception levels for the body resonance frequencies as 60 dB for 5 Hz, 55 dB for 12 Hz, and 48 dB for the 17-25 Hz band, or +5, 0, and +10 dB above the existing background for the respective frequencies. Such a process as proposed would explain the perceived annoyance within homes when no perceptable sounds could be heard outdoors. … 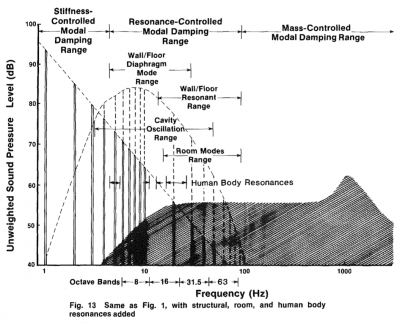