About 6 months ago John Harrison started calculating how the performance of wind turbines degrades over time [1]. He noted that as projects are in place over a number of years that their Capacity Factor (the percentage of their nameplate capacity that they actually generate) annually decreased somewhere in the 1-2% range. For example, a project that operated at a CF of 30% initially could be expected to be operating in the 15% CF range after 10 years of a 1.5% annual decline.

There are 3 main reasons the CF might decline: (1) a change in wind speed or direction, (2) dispatching (being told to turn them off) and (3) wear and tear. In Ontario and most other areas #2 is never done, per political fiat. #1 is calculated by taking the historical wind records from a nearby weather station and adjusting the actual output for the change in wind speed. And that leaves #3, which is what is left over after the changes in wind speed have been factored out.

I took his method, applied it to Denmark and found a similar decline [2]. And as you can see from the comments, others are reporting similar observances. But it takes a stable environment (with the same turbines in place and aging together, with no more being added) to be able to observe the decline, at least from public information.

A few days ago I received the monthly output numbers from Mars Hill, a project in Maine that just celebrated its 5th year in operation. I’ve written a lot about Mars Hill’s health and noise issues, but I had never come across how much electricity it actually generates. It turns out that it has quite good numbers, averaging almost 39% CF. Here is the graph of the 5 years (minus the first month, when their status wasn’t consistent). I did include July 2009, when they were down for maintenance. 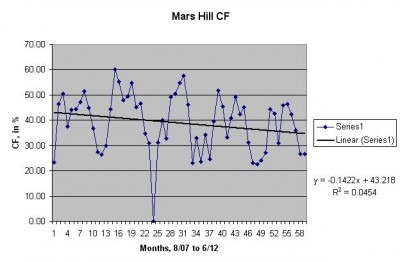 The trendline is unmistakeably down. As far as I know Maine has never dispatched any wind project. That leaves declining wind speed as the main alternative to wear and tear. I got the 5 year’s worth of wind speeds from nearby Caribou, Maine via Weather Underground. I used daily averages, then averaged them into each month, then cubed them to reflect the possible energy that can be extracted. I normalized these 59 months’ averages and obtained the following chart. 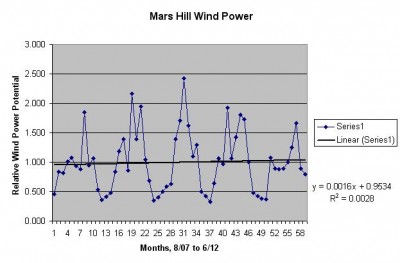 You can certainly tell when Winter is. The trendline is pretty much flat, indicating that a decline in winds is probably not the cause of the declining CF’s. Finally I divide the raw CF numbers by the normalized wind and get the following chart. 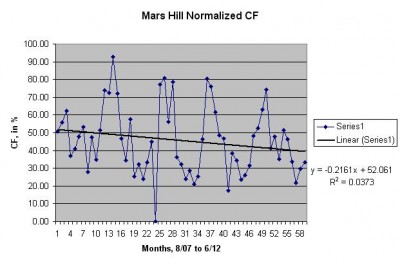 The trend here is also unmistakeable, and agrees quite well with our previous observations in Ontario and Denmark. The monthly CF decline calculates out to 0.216% per month, for an initial annual rate of ~2.6%. In other words, what started with a 52% CF in month 1 has become a 40% rate.

I say “initial” because the halfway point in this chart should be the same as the overall average from the first chart, and 46% is quite a bit above 39%. After puzzling over this for a while (and checking my numbers) I figured that the averages could be different if the turbines performed relatively better (or worse) at certain speeds that were more (or less) common. In this case, the higher wind speed averages are certainly less frequent than lower speeds (see the second chart above) and the turbines perform less well vis-a-vis their potential at these higher speeds.

To follow up on this insight I sorted the data by the normalized wind potential power from low to high. This technique makes any trendline slopes arbitrary, but at least a general trend can appear. The first one graphs the raw CF vs. the potential. We’d expect a reasonably straight ascending line and that is pretty much what we get. 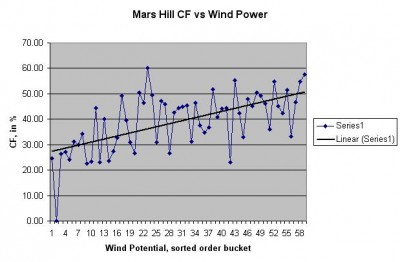 The second chart graphs the normalized CF vs. the potential. It shows that the turbines are less effective at getting energy out of the wind at higher wind speeds than they are at lower speeds. 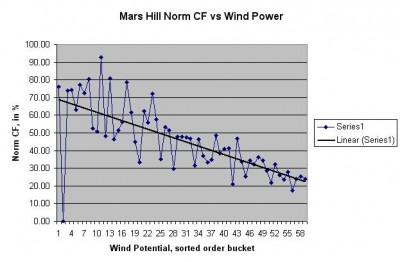 Then I remembered an earlier posting where I took a turbine’s rated output at different wind speeds and compared it to the potential energy of the wind at those speeds. So I guess I shouldn’t have been surprised.

Does this nuance affect the results I presented above? Most importantly, this nuance should affect all years equally, so the overall trendline remains down – but at what rate? The normalized average is about 17% above the initial average, and I would think we should lower the decline by that 17%. So instead of 2.6% per year maybe a figure of 2.1% is more appropriate. That is quite close to Harrison’s Ontario work and slightly above my Denmark figures. We are now 3 for 3, with maybe more in the offing. If anybody out there has any better techniques or insights I’d certainly appreciate them.

Applying this to Mars Hill, we would have a month zero normalized CF of ~44%, declining to a CF of ~34%, which gets us back to the very first chart, except that now we’ve factored out any wind speed change. That leaves us with wear and tear. Along with that, of course, is a declining economic and environmental value. Wind turbines don’t make any sense in the best of conditions, and those conditions just got a lot worse.