» »  THANK YOU !  « «
To all of you who made a birthday contribution.
Wind Watch still needs help, though. If you did not already, please give now. Every dollar (and euro, yuan, pound, krone, zloty, ruble, rupee, shekel, etc.) helps to keep us on line and independent.
posted:  February 14, 2014 • Health, Noise, Portugal, Videos 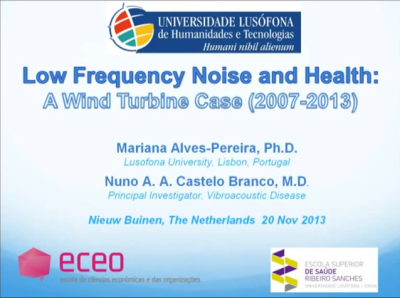 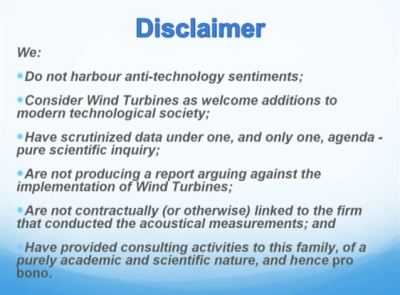 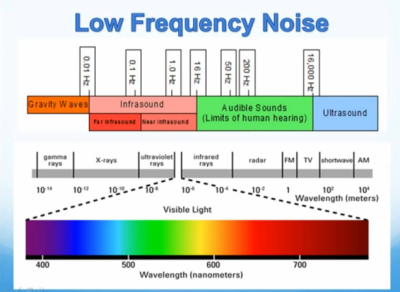 Over the years, we, the scientific community, have decided that noise only affects your ears. That is why we have the dB(A) unit to measure noise. Because we are interested in only measuring the noise that will causing hearing damage. Low-frequency noise does not cause hearing damage. It will not make you deaf. It is not measured when you use a dB(A) unit.

Compare the light with the noise. On top you have noise, on bottom you have light. Look what we do with the light. We separate UV, infrared, x-ray. We do not do this with acoustics. So how do I know which part is affecting your heart? Or you lungs? It’s all in one big bag. This is the problem with measuring the agent of disease.

On top you see what is a noise wave. I am here and the noise that is coming is going to hit my body. What you see on the right is your cells. So when the cell gets the impact of the wave, it will move. Like you see underneath. 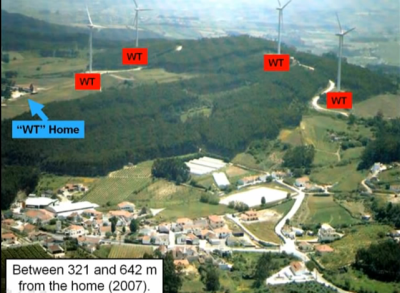 Our case with wind turbines began in 2007. As you can see on the left, you have the house and the 4 wind turbines that were put around this house in 2006. This is what it looks like. 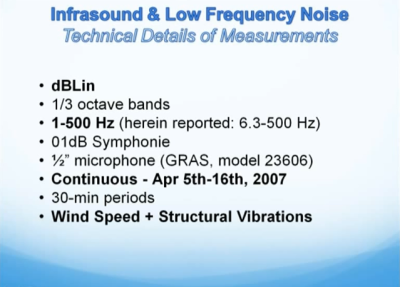 I am a scientist, I can not put up information about the noise that was measured without giving you the technical specifications of how it was measured. 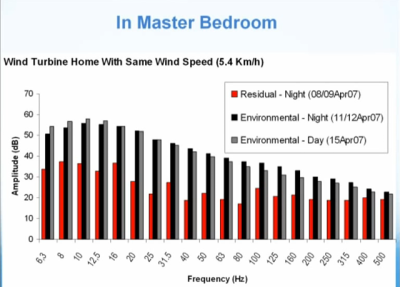 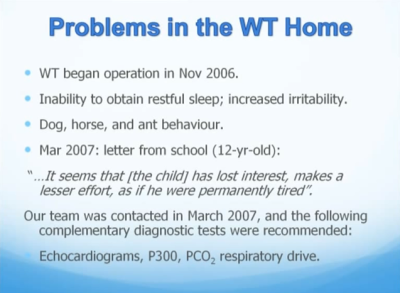 So what happened to this family? The wind turbines began operation in November 2006. Immediately the family recognised that they were waking up tired. The dogs that used to be jumping and always wanting attention were now sleeping. You had to step over them. The horses were lying down in their stable. And ants disappeared. In March 2007 the parents received a letter from the teacher of the boy, of the son, asking why this child was so tired now. He was losing all interest in school, he had no energy for physical education and a very good student was suddenly going down, down, down.

And this is the point [when] that the family contacted us. Unlike the Massachusetts report, and others, we did not give questionnaires to find out how the people’s health was developing. It is not through questionnaires. No questionnaires. If you have people with cancer, would you accept a doctor who would attempt to cure the cancer with a questionnaire? Tell me what disease is evaluated just with questionnaires? 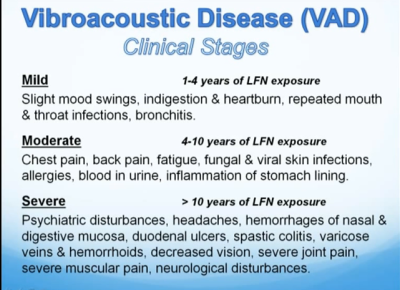 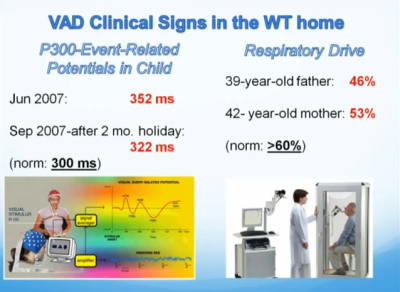 This is the test that we give to people to see if they have problems with low-frequency noise disease. On the right the test measures the time your brain takes to respond to a stimulus. Normal is 300 milliseconds. In the 12-year-old child in the wind turbine house, he was having in June 2007 352 milliseconds – this is a huge difference. When the child left the house for vacation, in September after being away from the house for 2 months the measurement came closer to normal.

On this side we have a breathing test. This breathing test measures how well your brain is controlling your breathing. Usually, if you have lesions in the brain, you will have problem in the breathing – and this is what this machine measures – not questionnaires. Normal for that examination is above 60%, and as you see the husband and the wife were already showing lower values. The child was not tested. 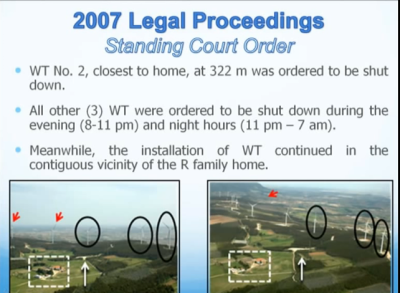 What is happening with the legal [case]? This man, this family put the wind turbine developer in court. In 2007 as a precautionary measure, the court said, take out wind turbine 2 – as you can see the white arrow, there used to be a wind turbine there. The court said that one has to go. And the other three must be turned off at night. And while this court case was ongoing, the developer continued putting wind turbines all along (red arrows). 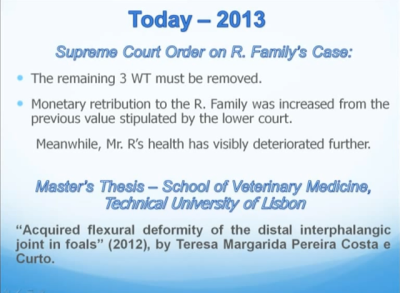 Today, the Supreme Court of Portugal decided that all four wind turbines must be removed. Of course it is only those four because the other ones were not covered by this case. The wife and children no longer live in this house since 2007. Only the father is in the house to take care of their horses. Today his health has visibly deteriorated.

This is basically my information to you about what we know about wind turbines. Of course, 30 years of research into low-frequency noise – you can not speak in 10 minutes all the information.

Presented 20 November 2013 at Nieuw Buinen, The Netherlands, by courtesy of Stichting Platform Storm

Transcript and video captures by courtesy of Stop These Things.