A great deal is made by wind proponents about how much of any country’s, state’s or province’s electricity is now, or can in the future, be provided by wind power. The best measure of this is the amount of wind electricity actually produced for consumption as a per cent of the total. When the experiences of aggressive early adopters of wind power are examined, a pattern emerges, which shows roughly that:

Figure 1 shows where the aggressive, early adopters of wind power are in their implementations relative to Ontario’s plans. 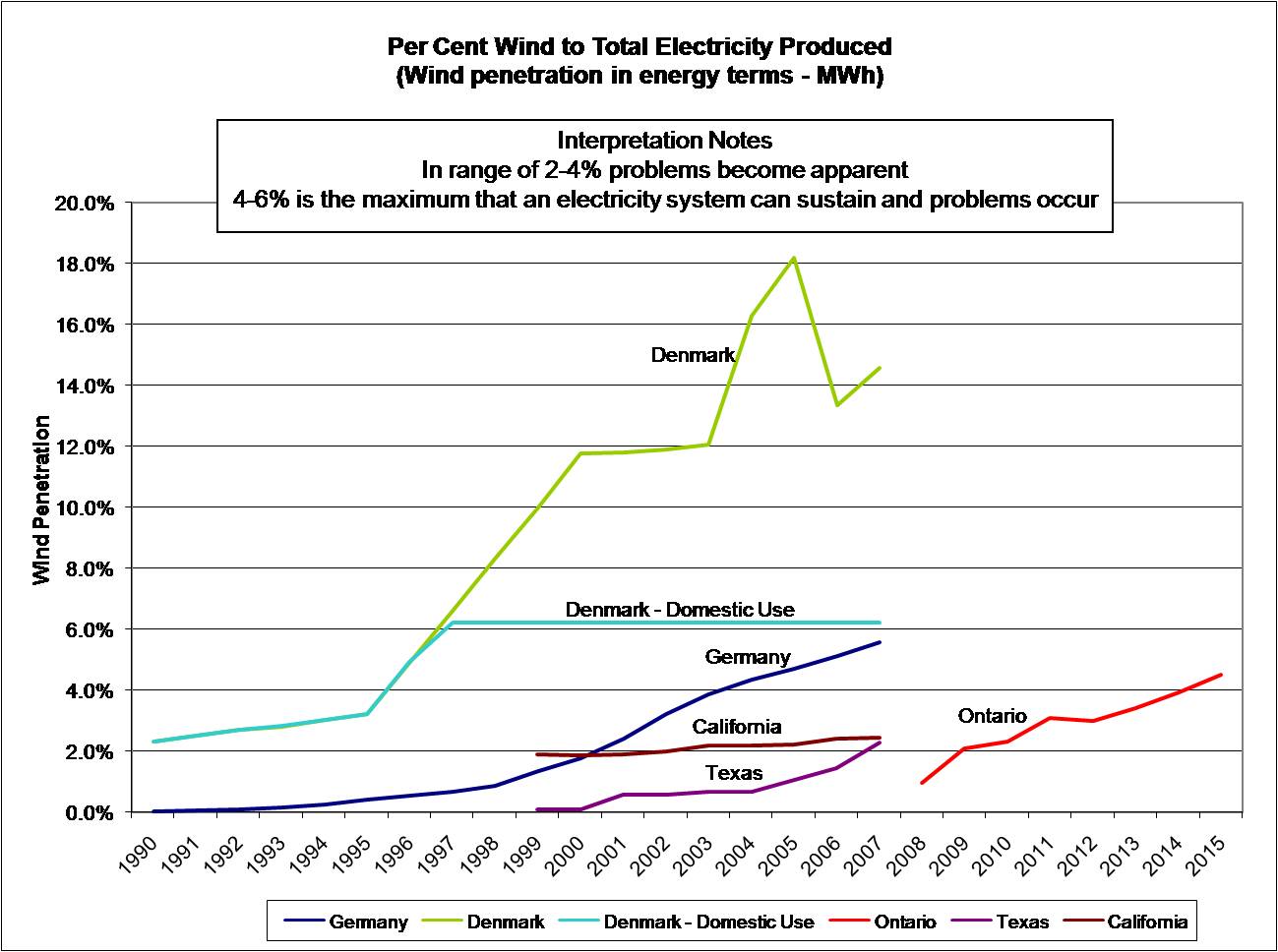 Comments on Figure 1 are:

Limits for the UK

In case there is some question about these conclusions, I refer you to an article in the November 2005 issue of Civil Engineering, “Why UK wind power should not exceed 10 GW” written by Hugh Sharman, the principal of a Danish energy consulting company, Incoteco (Denmark) ApS. Table 1 provides the related statistics for electricity generation in the UK, which contains about 1 GW of wind capacity today. The percentage of electricity produced is consistent with the findings presented here.

There are a number of factors leading to Sharman’s conclusions. The reality is that each country’s, state’s or province’s electricity system should be looked at individually, because each may have unique characteristics. For example Norway and Sweden combined obtain 75% of their electricity production from hydro.

More Detailed Analysis of Denmark’s Domestic Use of Wind Electricity

Table 2 shows the exports and imports of electricity for Denmark for four years based on the latest available information from the Danish Energy Association.

Immediately obvious is the fact that, although net exports can vary substantially, the exports remain at a fairly steady and high level. In Denmark’s case, the exports represent 25-33 per cent of the total electricity produced, which is very large compared to a few per cent for most other countries. The EU directive for calculating the share, of say, wind energy contribution to domestic use is to take the gross amount of wind and divide it by the total electricity production less net exports, that is, domestic supply. In almost every other country the inaccuracies introduced are not significant. Denmark dutifully follows this, which produces misleading results.

An “expert” study of Denmark’s use of wind electricity domestically for 2005 concludes the result to be 13 per cent. One of the underlying assumptions is that when Denmark is a net importer of electricity, all the produced wind power is used domestically. Think about that one!

Table 3 shows the results of my more detailed look for 2003-2007, taking exports and imports into account separately, and assuming 60-80 percent of the wind energy is exported. The basis for this assumption is: an article by the Utilities Journal in July 2004, which claims that 84 per cent is exported in 2003; and the very strong co relationship between wind production and exports in a timely manner. The 2003 wind production was the lowest of the years 2003-2007, and the actual installed capacity was level throughout this period. It is reasonable to assume that the internal consumption will not vary significantly from the 2003 level. The percentages are based on domestic supply.


My previous (and preliminary) analysis was based on four year averages using net exports. It showed 6 per cent, and also assumed that domestic use would not necessarily vary depending upon wind production, but by the ability of the Danish electricity system to absorb it. Given the results in Table 3, I have left Figure 1 as is, which is probably conservative.