I am a retired psychologist and was a member of both the Clinical and Counselling Colleges of the Australian Psychological Society when they were active. I have been in private practice for over 25 years as well as being the principal psychologist in a large rural hospital for five years.

Recently I visited some areas of rural South Australia and Victoria and spoke with quite a number of people who claimed to be adversely affected by the operation of industrial wind turbines in their vicinity. I queried if 100% of them could be affected by this new “nocebo effect” when its opposite – the placebo effect, was usually apparent in only 30% of experimental subjects. Unfortunately there is no reputable research supporting this “nocebo effect” so it must remain a guess.

Naturally as a psychologist (retired) I was interested in the deeper story than the widely reported symptoms I was hearing about. I was greatly disturbed when I was unable to find any other cause for their suffering than the turbines. So I did some research. What became obvious was the following:

More detailed research provided some more information behind the above statements:

Rick James, in a paper by Alec N. Salt 2010, provides graphs of recordings titled Industrial Wind Turbines Generate Infrasound (http://oto2.wustl.edu/cochlea/wt1.html [1]). These clearly illustrate the sound generated by wind turbines, both those sounds people can hear (e.g. blade passes) and those they can not (called infrasound). 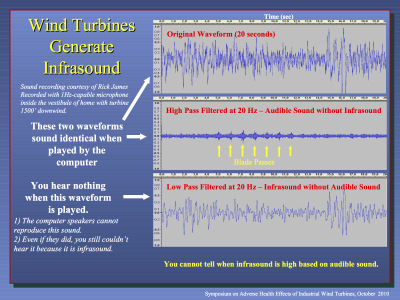 The noise people can not hear is less obvious. Some is benign and some sickening.

It has been said that if a person can not hear something it can’t affect them. This is untrue. It is also untrue of the other senses – Infra red and ultraviolet light can not be seen but one burns your eyes and the other burns your skin: some poisons can not be tasted but can still kill you – e.g. tetrodotoxin (puffer fish poison), salmonella and cholera toxin: carbon monoxide, carbon dioxide can not be smelled but can kill a person.

Again noise people can hear has obvious affects – fingernails scratching a black board, a beautiful symphony, the deep beat of a rock band, the scream of a jet fighter, the brakes of a truck and so on.

Sound that most people can not hear is either too highly pitched (high frequency) or too low (lower frequency than 20 Hz).

There is lots of anecdotal evidence that some infrasound, sound you normally don’t hear, makes you sick. Here are some of the health problems reported:

The following three conditions are rare, but important to mention.

3. Chronic Sleep Disturbance and Its Consequences

5. Combined Stress (Psychological and Physiological) and Its Consequences

The items below have been reported to from Germany in residents exposed for over 10 years:

The pathology is identical to that described in workers and others studied by the Portuguese researchers who first described VAD or vibroacoustic disease, (see www.wind-watch.org/documents/vibroacoustic- disease-biological-effects-of-infrasound-and-low-frequency-noise-explained-by-mechanotransduction-cellular-signalling/ [5]) now being diagnosed in others including most recently Taiwanese aviation workers (Chao et al, docs.wind-watch.org/chao.html [6]).

Finally, there are growing concerns about the potential for foetal abnormalities with increasing exposures to larger wind turbines and therefore more ILFN and V. These foetal abnormalities are being reported by some farmers in their stock (cattle, sheep) at rates which are noticeably increased for them since wind turbines commenced operating. The farmers who disclosed this keep accurate records of their stock numbers and problems, and were clear in their reports. The aetiological agent is not clear, and no one is systematically collecting this data, as with human health.

There is research evidence indicating concerns about the impact of vibration on embryos (referred to previously). Vibration is being reported by some of the residents, living near wind turbines and living near coal mines in the Upper Hunter. The vibration from wind turbines is also reported by institutions with seismic arrays, which are part ofa worldwide network to detect nuclear explosions. The characteristic acoustic signature is being detected significant distances away from such institutions in Scotland and Germany. Links to those pieces of research are at: www.wind-watch.org/documents/inaudible-noise-of-wind-turbines/ [7], www.wind-watch.org/documents/microseismic-and-infrasound-monitoring-of-low-frequency-noise-and-vibrations-from-windfarms/ [8], and there is research done in New Zealand by Dr Bob Thorne and colleagues measuring seismic energy from larger 3MW V90 Vestas wind turbines reported to be disturbing residents, at www.wind-watch.org/documents/seismic-effect-on-residents-from-3-mw-wind-turbines/ [9].

The long-term impact of chronic exposure to such low “dose” of vibration is unknown. It is my impression, however, that where a resident is reporting the perception of vibration, the resident’s health appears to be negatively impacted more rapidly, even when compared to others living in the same home.

All of the above problems listed have the characteristic pattern of improving partially or completely when the turbines are off, or when the residents are away from their homes. Some residents also report subsequently being affected by other sources of ILFN, such as when flying, or when exposed to LFN from heating and cooling (air conditioning) compressors, which is to be expected, as they have become “sensitized” to LFN. This phenomena of “sensitization” was noted by Professor Leventhall in 2003, where he also made it clear that if people moved away from the sources of the LFN their condition improved. What is being observed is that many sick people who do not or cannot move away, deteriorate with cumulative exposure.

Does this fit with biology and neurology?

The vestibular system in the brain does more than just allow us to stand upright, maintain balance and move through space. It coordinates information from the vestibular organs in the inner ear, the eyes, muscles and joints, fingertips and palms of the hands, pressors on the soles of the feet, jaw, and gravity receptors on the skin and adjusts heart rate and blood pressure, muscle tone, limb position, immune responses, arousal and balance. The auditory system is also highly involved in vestibular functions. The vestibular and auditory nerves join in the auditory canal and become the eighth cranial nerve of the brain. Anything that disrupts auditory information can also affect vestibular functioning.

There are two types of hair cells in the cochlea, the inner hair cells (IHCs) and the outer hair cells (OHCs). The IHCs are fluid-connected and velocity-sensitive, responding to minute changes in the acoustic pressure variations based on frequency, with sensitivity decreasing at a rate of -6 dB per downward octave. IHCs detect audible sounds and they are insensitive to low frequency and infrasonic acoustic energy. In contrast, the OHCs are motor as well as sensory cells.

OHCs are found only in mammals. OHCs are mechanically connected, responding to small changes in displacement, with a more uniform sensitivity across the acoustic frequency spectrum. OHCs respond to and contract with infrasonic stimulus and then act to reduce vibration stimulus at the IHCs. Thus there are actually two specialized receptors, or transducers, in each ear. Furthermore this research has highlighted the importance of the vestibular system, in particular regarding low frequency (and what is generally termed ‘infrasound’). The fact that air exists within the human body including, the sinuses, the Eustachian tube and the lungs, demonstrates that the potential avenues for acoustic energy to impact on the body clearly extends beyond the ear canal. Very low frequencies, the ‘booming bass’ at rock concerts, is certainly perceived, that is felt, in the body proper. Blood gravisensors and proprioception mechanisms clearly signal the brain that acoustic vibrations are being perceived. Indeed, this is one of the main ‘attractions’ of such loud music venues. The physiological and cognitive effects of this are less clearly demonstrable.

However, Dr. Carey D. Balaban, Ph.D., Professor of Otolaryngology, Biological Sciences, Neurological Surgery at the University of Chicago, has as his primary research goal to develop a rational basis for understanding the neurobiology of the vestibular system so that new therapies for vestibular disorders can be designed. This goal is approached by: (1) identifying the organization of central vestibular circuits that mediate autonomic and somatic motor responses to vestibular stimulation; (2) identifying neurotransmitters and intracellular signal transduction proteins that are important in these brain circuits; (3) examining the role of these biochemical constituents in responses to challenges from toxins and mechanical (blast) injury; and (4) identifying contributions of these mechanisms to the clinical linkage among balance disorders, anxiety disorders (panic with agoraphobia) and migrainous vertigo. More details about how these goals were achieved by addressing the research identifications and examinations in (1) to (4) above can be found at Expert Rev Neurother. 2011 March; 11(3): 379–394. doi:10.1586/ern.11.19 [14]. These studies have a strong translational component through interactions with Drs. Joseph Furman, Rolf Jacob, Dawn Marcus, Susan Whitney, John Durrant and Mark Redfern.

The studies conclude that over the previous 20 years, clinical observations and basic research have provided evidence that the prevalent comorbidity of balance disorders, motion sickness, migraine and anxiety disorders is not a chance occurrence. Many comorbid combinations have been reported. Balance disorders (both neuro-otologic disease and chronic subjective dizziness) are often comorbid with psychiatric disorders [1–5] and with migraine [6–8]. Migraine is often associated with vertigo [10–12]. The increased motion sickness susceptibility in migraineurs [8,13–15] is attenuated by tryptan treatment [16,17]. Migraine is also associated with phobic disorders and panic disorder [9]. Migraine and balance disorders are comorbid with anxiety disorders [6,7]. We suggest that three mechanisms may contribute to the comorbidity and overlap in treatment regimens. First, the parallel patterns of serotonin, TRPV1 and purinergic receptor expression in trigeminal, vestibular and spiral ganglion cells are consistent with parallel therapeutic effects at the level of primary afferents. Second, parallel behavior of protein extravasation in inner ear, meningeal and peripheral tissues and activation of central trigeminal and vestibular pathways may contribute to comorbid migraine, vestibular disorders and hyperacusis or tinnitus. Since these migraine and audio vestibular symptoms share common peripheral mechanisms, they are expected to respond in parallel to treatment that reduces extravasation. Finally, the parallel organization of vestibular and nociceptive pathways through the parabrachial nucleus and thalamus to the amygdala and cerebral cortex is consistent with a common central representation of interoceptive well-being, which influences control of affect. The clinical picture that emerges is a balance disorder–migraine–anxiety syndrome that can manifest differentially in different patients, with comorbid components that can respond to similar treatment regimens. References numbered above are as follows:

What is also well known from the trauma literature is that the amygdala is the primary site of warning to the brain oftentimes bringing on extreme fear, flight or fight reactions, panic and high level anxiety, and affects the thalamus to assist in reaction to threat.

Ellert R.S. Nijenhuis writes that there is evidence that the adult brain may regress to an infantile state when it is confronted with severe stress (Jacobs and Nadel, 1985, Le Doux, 1996). As Le Doux argues, the amygdala is essentially involved in very rapidly and automatically instigated physiological and behavioral responses to a major threat, as well as the classical conditioning of these threat responses. This conditioning yields probably indelible associations between unconditioned and conditioned stimuli. Extreme stress does not interfere with, and may amplify, memory processes mediated by the amygdala (Corodimas, LeDoux, Gold and Schulkin, 1994) [even if the threat comes from an infrasound stimulated Vestibular system], but it does hamper hippocampal-neocortical information processing which should inhibit or regulate emotional reactions and memories [turbine affected people may not have access to information they have been told about the bad effects of turbines – which mitigates against any so-called ‘nocebo effect’]. Chronic release of stress hormones may even damage the hippocampus. This stress-induced condition resembles the infantile state, which is characterized by functioning amygdala and a relatively immature hippocampal-neocortical system. Extreme stress may therefore evoke defensive reactions in adults which are also evoked in young children.(This text is in Ellert R.S. Nijenhuis, Somatoform Dissociation, page 117, 2004, W.W. Norton and Company, New York, as are the quoted references). It is easy to see why people exposed to a toxic stimulation of the vestibular system wake from sleep in terror.

The noise you can and cannot hear from wind turbines makes you sick and sometimes very sick.