Man-made infrasound occurs at higher intensity levels than those found in nature. It is therefore conceivable that with the increase in man-made sources, there may exist potential danger to man’s health. Stephens and Bryan have reported complaints of people about infrasound, including disorientation, nausea and general feelings of discomfort [7]. In short, responses generally resemble those seen during whole-body vibration, and are mostly of a non-specific nature, resembling reactions to mild stress or alarm [8,9].

Data obtained in comprehensive experiments by Mohr et al. reveal that exposures to high-intensity infrasonics (100-160 db) for short duration (two minutes) have adverse effects on man [8]. Results of these studies are summarized in Figure 10-1. 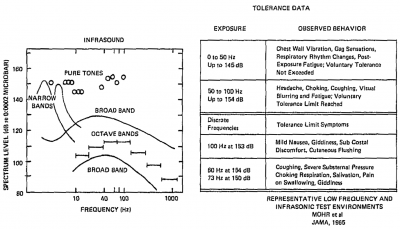 Mohr et al.’s data have been confirmed by Nixon [10]. Whether or not symptoms similar to those described in Figure 10-1 would occur for prolonged exposure to low intensities of infrasound still remains an open question. There is, however, a report by Green and Dunn which shows that there exists a correlation (0.5) between infrasound exposure and disturbance of certain activities, such as increase in absenteeism in school children and unskilled workers and a higher rate of automobile accidents during periods of higher infrasonic exposure [11].

A variety of bizarre sensations in the ear have also been reported during exposure to airborne infrasonic waves. These include fluttering or pulsating sensations [12].

There is some evidence that intense infrasound (120db Sound Pressure Level or above) can stimulate the vestibular system, as can low-frequency vibration, leading to disequilibrium if the stimulation is intense enough; nevertheless, there is no evidence that the hearing organ may be affected by exposures to infrasonic waves encountered in real-life situations [8,9]. However, Guignard and Coles (1965) have demonstrated that a very high-frequency mechanical vibration may produce a small TTS [temporary threshold shift] involving the lower audiometric frequencies and from this it may be inferred that airborne infrasound could possibly also have an effect on hearing [13].

Various experiments have attempted to shed light on this problem [9]. Results are presented in Table 10-1, The data contained in Table 10-1 reveals that: 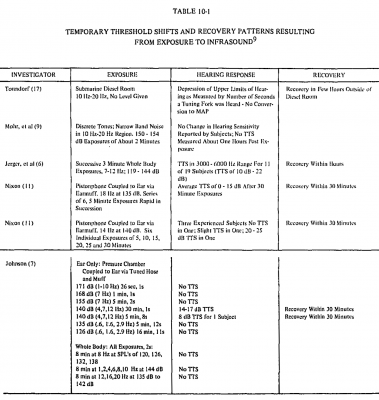 The data available suggests that infrasonics do not pose a serious problem to the hearing mechanism when intensities are below 130 db SPL (which is generally the case); however, where high intensities are present (above 130 dB SPL) there may exist a serious hazard.