Impact of a Wind Turbine Project on a Rural Community

Invenergy is proposing to construct a wind turbine project in North Perth and Perth East southeast of Listowel. The project area is one of the best farming areas in Ontario as it is largely made up of Class 1 Agricultural land. The project area produces approximately 3% of Ontario dairy milk and also is home to intensive beef, pork and chicken operations. The impact of wind turbines on intensive agricultural operations and rural hamlets has not been given sufficient consideration in the REA process reviewing wind turbine projects and the Elma-Mornington Concerned Citizens have looked to the other nearby communities where turbines have been operating for some time to understand the impact.

The following report on the Ripley Wind Turbine project is part of this research process. It documents the situations and current status of 12 properties within the Ripley project area. The Ripley Wind Power Project began operation in December 2007. The project consists of 38 Enercon E82 wind turbines rated at 2 MW. The project also included approximately 26 kilometers of overhead collector lines and a sub-station located on Sideroad 25 south of Concession 6.

Prior to the construction of the wind turbines, this area of Huron-Kinloss Township southwest of the village of Ripley was largely used for cash cropping but also included a large beef operation and two horse farms. Both livestock operations are now gone.

Many homes had been separated from the adjoining farmland and sold as rural retreats or small hobby farms. Many of these homes are now vacant or demolished. 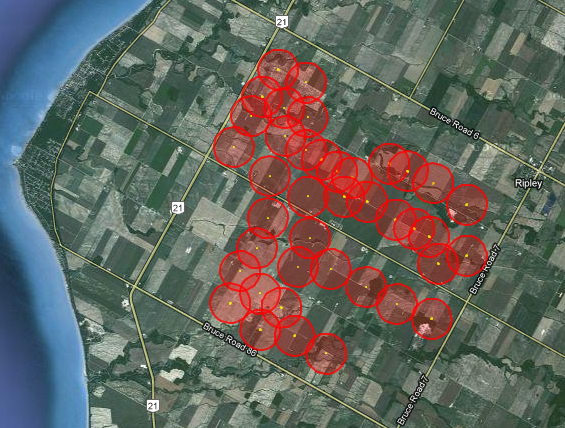 Locations of the wind turbines – http://ontario-wind-turbines.org/owt-maps-c1.html 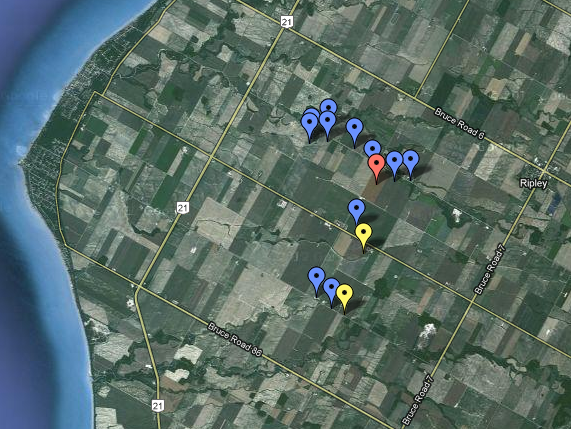 Property #1 – Concession 4 and Sideroad 25. House owned by Suncor/Acciona and now abandoned. Before the construction of the wind farm, this was the home farm for a family beef operation of about 500 head of cattle. Of those, approximately 200 head were located on this farm. When the operator could no longer live here, the operation closed.

Property #2 – Concession 2 and Sideroad 25. Before the wind turbine project was constructed, this house and barn were occupied by the son of owner of Property #1. The barn once housed 100 head of cattle. Property #2 was purchased by Suncor/Acciona and the house and barn where recently demolished. The only remaining sign of the former livestock operation is the OFA member tag on hydro pole and the 911 number lying in the grass.

Property #3 – Concession 2 between Sideroads 20 and 25. Before the construction of the wind project, this barn was leased by the owner of Property #1 for 200 head of cattle but it is now empty. Land owned by corporate farm operation. House to the right of the barn is separately owned.

Property #5 – corner of Sideroad 30 and Concession 6. Owner is reportedly ill and has moved to Manitoba to farm. House is currently for sale.

Property #6 – Sideroad 30 north of Concession 6. Owners had health problems linked to electrical pollution that could not be totally resolved. House and farm purchased by a cash crop farmer. The house was severed from the farm and sold separately. The land was used for cash crops prior to the wind project and this use continues.

Property #7 – Concession 6 east of Sideroad 30. House owned by Suncor/Acciona and now abandoned as it cannot be sold. Previous owners trained horses that were bothered by shadow flicker and noise. House experienced electrical issues as well as excessive levels of noise measured at 74 dBA in master bedroom.

Property #8 – Concession 6 between Sideroads 25 and 30. House is located on a separate property from adjoining farmland. It was previously rented but family left due to health issues. The house is now vacant and for sale.

Property #9 – Concession 6 at Sideroad 25. House is on a separate property from adjoining farmland. House exposed to noise levels over 40 dDB from substation 1000 metres to the south. House owned by Suncor/Acciona and now abandoned.

The turbine locations were largely leased from non-resident owners of large areas of farmland. A few resident leaseholders continue to live in the area. Information from the community suggests that they are experiencing health problems but are not publicly disclosing these due to restrictive clauses in the turbine leases.

Leaseholder #1 – Concession 2 between Sideroads 20 and 25. This property is owned by a leaseholder who continues to occupy the house. Reports of health issues (including teenage daughter) are not confirmed due to restrictive clauses in the turbine leases. Contaminated hydro distribution lines terminate at this property.

Leaseholder #2 – Concession 4 between Sideroads 20 and 25. This property is also owned by a leaseholder. Problems with excessive infrasound are reported when winds are from the southeast and noise bounces off of barn and hits house. When this happens, the owners move to another house that they have in Paisley.