Back to the Future II … This is a true story, depicted by Marty and Doc. Their mission: Identify the ignored warnings in the Hoosac wind turbine studies. That opened rifts into an alternate universe, where noisy wind turbines were permitted to invade homes. The wayback clock is set to: OCT 06 2003 …

Florida and Monroe are rural, so how quiet?
There are no busy roads or commercial activity. This chart shows a “Quite Rural Nighttime” at 25 dBA and even less. 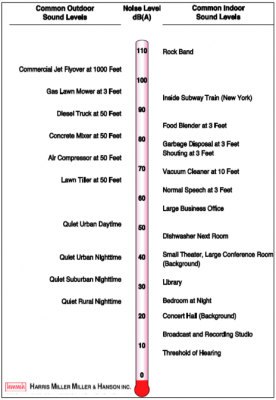 Does Massachusetts have noise limits for large wind turbines?
Yes, look at the MassDEP noise policy:

Noise is a public health concern that falls withing the scope of Massachusetts Department of environmental Protectin authority as a form of regulated air pollution. …

Noise is a type of air pollution that results from sounds that cause a nuisance, are or could injure public health, or unreasonably interfere with the comfortable enjoyment of life, propert, or the conduct of business. …

A noise source will be considered to be violating the Department’s noise regulation if the souce … increases the broadband sound level by more than 10 dB(A) above ambient. … These criteria are measured both at the property line and at the nearest inhabited residence. “Ambient” is defined as the background A-weighted sound level that is exceeded 90% of the time.

Will neighbors complain?
ISO has a simple table: 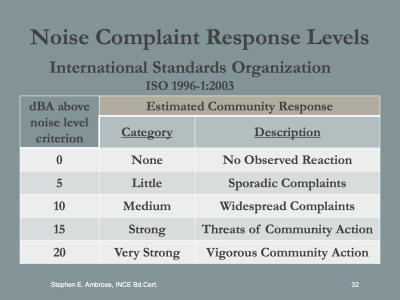 We need to read the report …

Results of the study indicate that the highest average noise level at an occupied residence will be 42.6 dBA. The lowest level of the eight homes in the study was 36.6 dBA.

They wrote this without knowing how quiet the area is?
Let’s look at the noise data they used in appendix E.

Second Study:
Decision on application for special permit
Town of Florida Board of Selectmen

This Florida Board decision makes no sense.
A peer review by a community noise expert would have predicted “Very Strong” reaction.
Widespread Complaints!!
MassDEP recognizes this: Turbine max noise no more than 10 dB above ambient (L90).
Plus 20 dB is the HIGHEST REACTION!!! 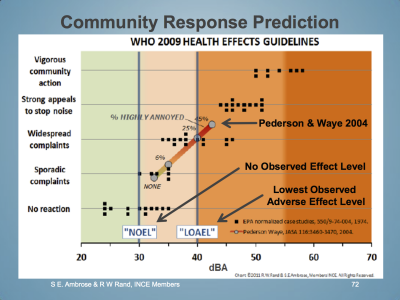 How can a “Quiet rural area” be ignored?
Increase background ambient with wind?
Measure wind noise?
Look at the Hoosac measurement pictures: Sound level meters are too close to trees.

Can wind turbine noise measurements mislead?
Yes, when the turbine is not operating normally. GE 1.5-MW turbines produce an “acoustic fingerprint”, a tone at 160 Hz. Fig. 28 shows that fingerprint at 125 Hz, indicating an RPM slower than normal. Fig. 30 shows the fingerprint at 100 Hz.

How else?
Chris Kapsambelis plotted the turbine power output vs. wind speed given in the Hoosac sound study and the published GE 1.5sle data:

In comparing the recorded power output to the published power curve data, it is clear that the wind turbines were not operating normally. The power output was as much as 33% less than normal, which would mean that the sound power level was also substantially reduced. 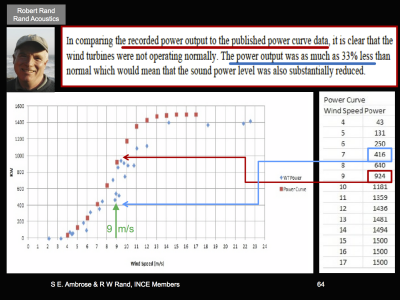 These graphs raise questions about their noise measurements.

The maximum monitored sound levels from the wind turbines, with background subtracted, ranged from 29 dBA at Tilda Hill North to 43 dBA at Moores Road North. [no nearby residences identified]

They confirmed Hoosac turbines over 10 dB!
43 dBA is too loud by their own data tables. 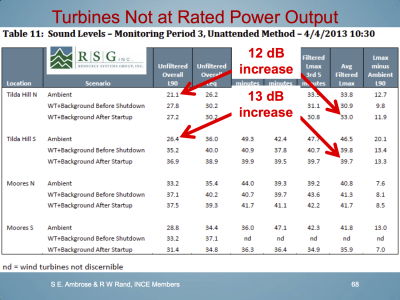 Hoosac’s artificially low noise levels are above the MassDEP noise limit.
Again, measurements show Hoosac is too loud! Even at lowered power output! 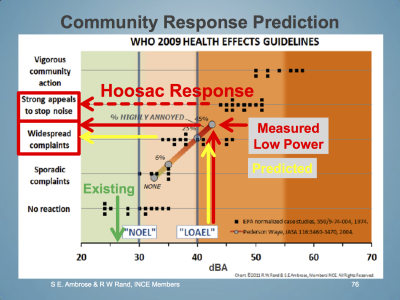 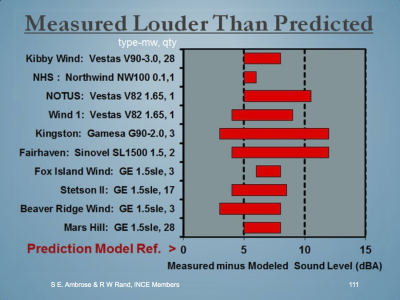