Five international documents of noise impact of wind farms were studied and summarized, highlighting their main aspects, methodologies and maximum acceptable limits, allowing the proposal of guidelines for an eventual specific regulation for the Chilean territory. In all analyzed documents, the influence of wind was considered as the main factor in determining the maximum permitted noise at the receptor. Regarding the proposed guidelines for the Chilean territory, in order to determine the maximum permitted levels in the receptor, it is suggested to respect the highest value between either a fixed limit, according to wind speed in integer values, established as a result of a full study by Chilean competent authorities in the country or a maximum limit by meeting a given background noise level plus a margin of 5 dB(A). If the above is not achieved, it is suggested as a last resort to establish compensation to the receptors for each dB exceeded.

For purposes of noise monitoring (either background or wind farm), it is proposed the use of the parameter L90(A),10min, which ensures freedom from the influence of occasional noises. It is recommended that such monitoring is carried out in the dwellings closest to the wind farm, at a height of 1.5 meters above the ground and away from reflective surfaces. It is suggested, in order to collect reliable data, a period of continuous measurements of 10 to 14 days for both background and wind farm operational noise, avoiding rainy days. In parallel, it is proposed to record the wind speed at a height of 10 meters on the wind farm or in a representative area. If there is proof of tonal noise by frequency bands analysis, a penalty of 5 dB will be proposed.

Download original document: “Guidelines for developing regulations for acoustic impact, based on the stage of operation of wind farms in Chile [1]” 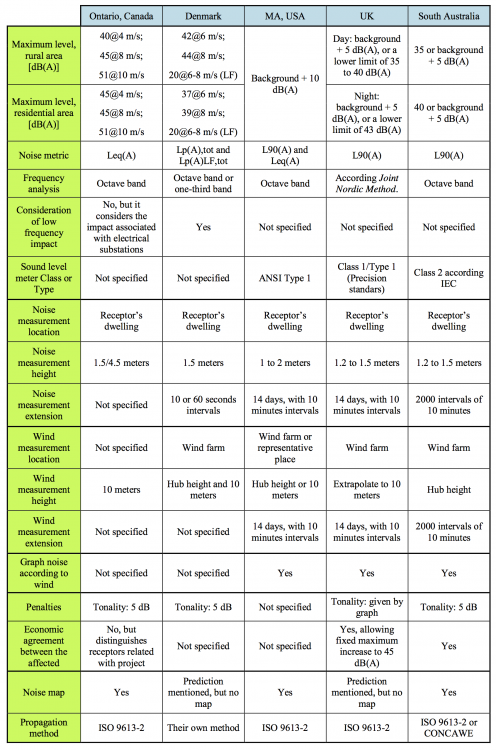