» »  THANK YOU !  « «
To all of you who made a birthday contribution.
Wind Watch appreciates your help at any time. If you did not already, please give now. Every dollar (and euro, yuan, pound, krone, zloty, ruble, rupee, shekel, etc.) helps to keep us on line and independent.
posted:  November 8, 2016 • Environment, Regulations, Wildlife

Demand for renewable energy is rising exponentially. While this has benefits in reducing greenhouse gas emissions, there may be costs to biodiversity [1]. Environmental Impact Assessments (EIAs) are the main tool used across the world to predict the overall positive and negative effects of renewable energy developments before planning consent is given, and the Ecological Impact Assessments (EcIAs) within them assess their species-specific effects. Given that EIAs are undertaken globally, are extremely expensive, and are enshrined in legislation, their place in evidence-based decision making deserves evaluation. Here we assess how well EIAs of wind-farm developments protect bats. We found they do not predict the risks to bats accurately, and even in those cases where high risk was correctly identified, the mitigation deployed did not avert the risk. Given that the primary purpose of an EIA is to make planning decisions evidence-based, our results indicate that EIA mitigation strategies used to date have been ineffective in protecting bats. In the future, greater emphasis should be placed on assessing the actual impacts post-construction and on developing effective mitigation strategies.

The high legal protection of bats (e.g., Europe: EUROBATS 2014; North America: Endangered Species Act 1973), together with the known risks to bats from wind farms (e.g. [2]), means that detailed preconstruction ecological assessments are frequently undertaken. Acoustic surveys are widely used to provide an estimate of bat activity from which collision risk is inferred. However, bat activity is highly variable – both spatially and temporally. It is therefore unclear whether the survey protocols currently employed assess bat activity with sufficient precision and repeatability to be of practical value in inferring risk for developments. Determining the best methods to assess likely impacts on bats from wind turbines is regarded as a research priority by EUROBATS [3]. To our knowledge, there has only been one study (in North America) that investigates the value of using bat activity to predict the risk to bats from future wind turbines. This found that pre-construction bat activity was not a significant indicator of collision risk [4]; however, the value of EIAs in predicting risk was not assessed. We therefore assessed the effectiveness of pre-construction EIAs as a tool to aid decision-makers in determining the impact of wind energy on bats.

We surveyed 46 wind farms across the UK for bat fatalities as part of a separate field study investigating the impact of wind turbines on bats. We were able to obtain EcIAs for 29 of these sites; the remaining EcIAs could not be obtained from public sources or developers. Eighteen EcIAs concluded that a field assessment of bat presence/activity was not required (evidenced by statements in the EcIA such as “Surveys are unnecessary as the development does not affect any features likely to be used by bats”), or inferred based on field surveys that no significant effects on any protected species would occur (see also Table S1 in Supplemental Information, published with this article online). However, during our post-construction surveys we found that half of these sites contained casualties (ranging from one to 64 fatalities per month during the July–October survey period), and 97% had evidence of bat activity (ranging from one to 236 passes per night). The perception of risk to bats during EcIAs was not significant in predicting either bat casualty rates (Figure 1A) or activity levels post-construction (see also Figure S1). While there was a positive relationship between sites ranked by perceived risk to bat populations and the ranking of sites by casualties per month (Figure 1B), there was considerable scatter in the data, and 9 sites identified as having the lowest risk had more than 1 casualty per month. 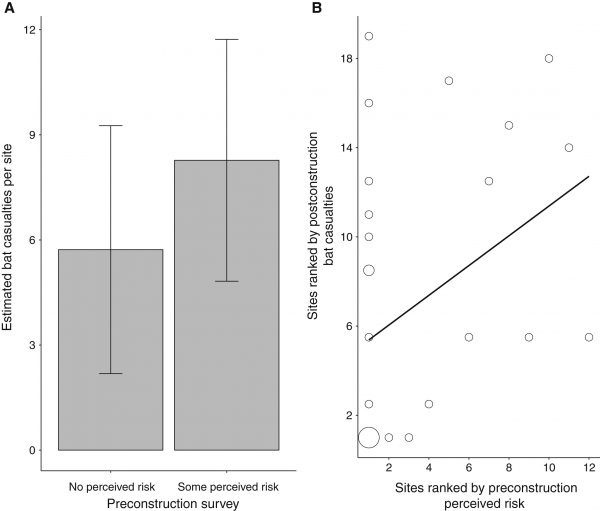 Figure 1. The relationship between pre-construction assessment of risks to bats and post-construction fatalities. (A) The difference in the average number of bat casualties per site between wind farms where preconstruction surveys perceived different levels of risk. Error bars depict the standard error of the mean (n = 29). (B) The marginally significant relationship between ranked pre-construction assessment of risk to bats and ranked post-construction fatality estimates (ρ (29) = 0.36, p = 0.05). Sites are ranked in ascending order of perceived risk. Circle size is proportional to the number of sites at a particular ranking (range 1 to 3 sites).

Our results show that sites which may have been perceived as of poor quality for bats can contain casualties after wind turbine construction. Similarly, bat activity recording during pre-construction surveys may not accurately reflect activity levels post-construction. This may be due to bats changing their behaviour at turbines [5], as bats may be attracted to wind farm sites for a variety of reasons, including the emission of ultrasound from turbines [6] and increased prey availability [5]. It is therefore essential that future mitigation strategies are formed with an understanding of how bat behaviour differs at sites after turbines have been constructed. Additionally, surveying effort has to be adequate both spatially and temporally to assess risks to bats in the first place. Pre-construction surveys are conducted predominantly at ground level due to the difficulties and cost of surveying at height; however, where meteorological masts are in place (or as drone technology develops) then conducting acoustic surveys within the rotor-swept area may give a more accurate assessment of risk. But this relationship has yet to be tested.

Given the economic cost of EcIAs, the value attached to their findings during planning applications, and the possible consequences to biodiversity of errors, it is vital that they are fit for the purpose. We highlight that although EIAs give the perception of rigorous safeguarding of environmental standards and may portray energy companies with an environmentally friendly public image, considerable time and expense goes into deploying bat detectors at pre-construction sites with little justification. Although the use of EIAs has evolved differently between nations [7], there is a pressing global need to identify the procedures which can accurately identify risk to bats (e.g., Brazil [8]). The precautionary principle indicates that sites perceived to contain little collision threat to bats should be treated with caution until there is a greater understanding of how to identify risk factors to bats. On occasions when mitigation is currently deemed unnecessary, post-construction surveys should still be conducted (e.g. carcass searches) to ensure that the predictions are accurate and bat behaviour has not altered from pre-construction levels. Establishing the species assemblage at a site may nevertheless have some value in identifying the presence of species at high collision risk and/or of particular conservation concern in the region. In mainland Europe, automated systems using weather variables and site-specific post-construction bat activity data have been used to trigger turbine curtailments to minimise bat collisions [9]. Pre-construction surveys may therefore still be useful as the data (e.g., nightly and seasonal peaks of activity) may provide an indication of the extent of curtailment that is required and therefore the economic viability of the project. Our results highlight the importance of longitudinal monitoring of major developments and a feedback mechanism for practitioners to share the success or failure of mitigation strategies.