Regular visitors to the Scottish hills cannot have failed to notice the increasing environmental influence of renewable energy in recent years. Windfarms now feature prominently in views from many of our most iconic ‘wild’ mountains, a trend likely to accelerate with the Scottish Government’s tight timetable to generate all of Scotland’s power needs with low carbon technologies. If many more large onshore windfarms now look inevitable, then the question of how best to minimise their environmental impact arguably gains greater urgency. Is it possible both to develop and to conserve the large areas of scenic wild landscape for which Scotland is notable in a European context? Where are the areas which if developed would minimise the extent of intrusion on the remaining uninfluenced landscape? A new study by Steve Carver and Michael Markieta of the Wildland Research Institute [1] at the University of Leeds aims to address this question.

The team summarise their work for UK Hillwalking [2] here, with links to the interactive mapping they’ve been using to determine landscape impacts. 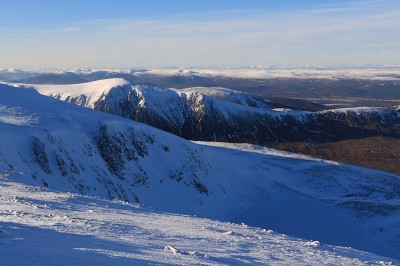 A recent analysis carried out by Scottish Natural Heritage [4] (SNH) showed that the area of the Scottish countryside that is free from visual influence caused by built development declined from 41% in 2002 to 31% in 2008. More recently still, this figure has now declined to 28% in 2009. While this figure is based on all built structures (airports, roads, railways, pylons, urban areas, etc. and importantly existing wind turbines) it is an alarming trend and one that potentially masks the contribution to this erosion of landscape character and values that is due to wind energy developments. Earlier work by SNH showed that in the central Highlands the amount of land free from impacts caused by road and rail access, plantation forestry, hydro power and electrical transmission lines declined rapidly between 1860, 1950 and 2000. Government claims that “Scotland has the potential to become the Saudi Arabia of renewable” backed by the 100% renewable target has surely given a green light to further expansion of wind energy over the next few years. Such a trend is not without its detractors and questions have been raised in Parliament by the John Muir Trust [5] on this. 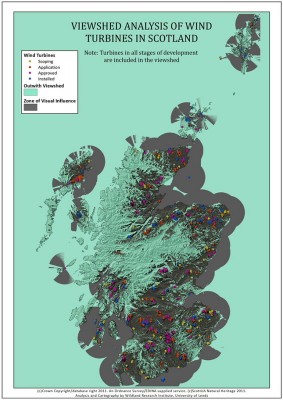 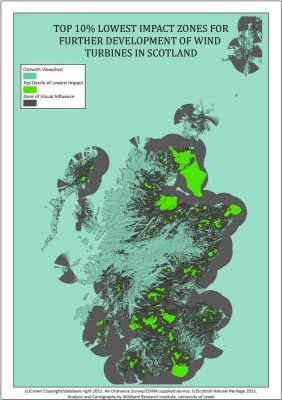 See Figure 2 as an interactive map on Maptube here. [8] 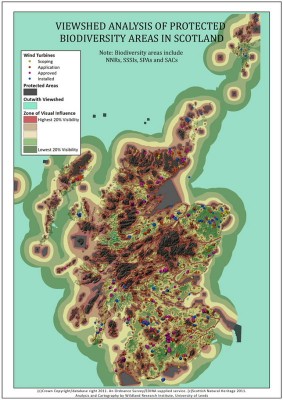 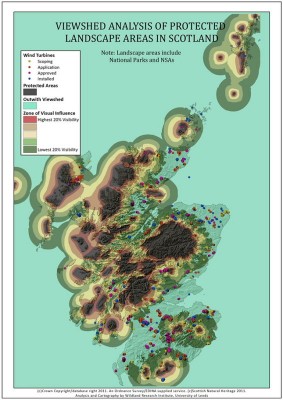 [8] See Figure 2 as an interactive map on Maptube here.: http://maptube.org/map.aspx?s=DGxXpxEjHLSiRCSMEJPApcHAp1bAoTjd