Cullerin Range Wind Farm was developed by Epuron and transferred to Origin who completed construction and operation began in July 2009. The wind farm consists of 15 2MW REpower turbines, each tower reaching to around 80 metres with turbine blades of 46 metres [total height 414 feet].

Local residents have complained of noise and other disturbing impacts from the wind farm since operation began in July 2009.

The Cullerin Range Wind Farm Survey from August 2012 found a large percentage of residents out to 7.5km were being adversely affected by the noise and vibration created by the industrial wind turbines of the Cullerin Range wind farm.

This follow-up survey sought to find out if affected residents had complained and if so what was the outcome.

An anonymous self-reporting survey, map with distance bands indicated so households could establish how far they actually resided from the turbines and a letter of introduction explaining why the survey was being conducted were hand delivered to all households within or near a 10km zone of the Cullerin Range wind farm. Each survey was individually numbered to avoid tampering.

There were no residents past 8km affected by noise and vibration.

Of the households affected: 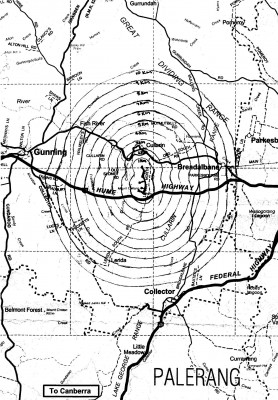