Corncrakes and Great Northern Divers: Hypocrisy and the Destruction of an Endangered Species

The inshore waters of Tiree hold over 42% of the wintering population of the Great Northern Diver (aka, the Common Loon) … the proposed location is home to these beautiful birds. 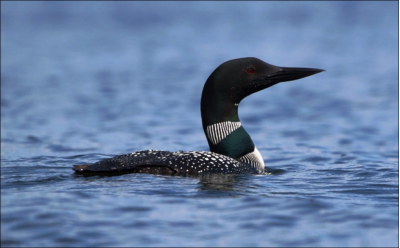 In 1992, Governments throughout the European Union adopted legislation designed to protect Europe’s natural resources. The legislation is called the Habitats Directive and it protects the most seriously threatened habitats and species across Europe. It complements the Birds Directive adopted in 1979.

At the heart of both of these Directives is the creation of a network of sites called Natura 2000. The Birds Directive requires the establishment of Special Protected Areas (SPAs). SPAs are vitally important for rare and vulnerable birds because they rely on them for breeding, feeding, wintering and migration.

The Habitats Directive requires Special Areas of Conservation (SACs) to be designated for other species, and for habitats. SACs are classified under the Habitats Directive and provide rare and vulnerable animals, plants and habitats with increased protection and management.

Together, SPAs and SACs make up the Natura 2000 network. All EU member States are required to manage and implement Natura 2000 Networking Programme’s partnership approach. A strategic approach that ensures for example ; that a species breeding in one location can arrive at its wintering grounds in another … and complete its natural cycle.

In March 2000 the land mass of Tiree was classified as a SPA, this decision was based on our breeding Corncrake population. The population forms 9.2% of the UK’s breeding population.
To attain this protection for our Corncrakes the Isle of Tiree had to fulfill a certain number of criteria, this was exceeded and now the Corncrakes have a stable breeding ground. What implications the proposed Argyll Array (Tiree Array) will have is yet to be established.
Will ringing our island with turbines cut these birds down mid flight? Will the other two huge wind farms to the north and south destroy migration routes for the Corncrake and our other avian visitors?

The destruction of the Great Northern Diver wintering grounds (fiasco, illegal or hypocrisy?)

It is a simple task to show that the Great Northern Diver or Muir-bhuachaille is a vulnerable species; it is on the IUCN RED List. It is a species classed as ‘ highly sensitive to human disturbance’ and currently falls within the realms of a local extinction criteria, if not protected it will gradually climb up the list to ‘ High risk of Global extinction’ (http://www.iucnredlist.org/apps/redlist/details/106003868/0).

As with the Corncrakes, all species have to meet and hopefully exceed a certain threshold of numbers and concentration to be viably placed within the protection of an SPA or SAC. It makes sense to protect vulnerable and at risk species from decline. As per the Scottish Executives Environmental report (Scottish Marine SEA Faber Maunsell & Metoc 2007) preempting the allotment of exclusive rights to Scottish Power Renewables and others … and pertaining directly to Great Northern Diver population:

Northern and Western Scotland holds very important numbers of Great Northern Divers overwinter. The study area is a strong hold for this species in winter in the UK. Great Northern Divers prefer rocky to sandy shores, and their distribution extends more offshore (10s of km) than the other diver species (Black Throated/Red Throated) Large concentrations are found in particular along the sandy shores and bays of the Northern Isles and Western Isles, in Shetland at least that numbers are in sharp decline (Heubeck 2005)

The inshore waters of Tiree: a solid case for SPA status, the winter home of the largest population of Great Northern Divers in the UK

On the basis of the UK SPA Selection Guidelines (Stroud et al. 2001) the waters around Coll and Tiree qualify as an SPA in the area for the great northern diver at stage 1.1. Therefore, when the complete suite of marine SPAs in inshore areas is being determined the inshore areas of Coll and Tiree (or parts thereof), should be considered for inclusion. If the inshore areas of Coll and Tiree are further considered for SPA classification then additional analysis will be required of the data presented here in order to determine a boundary for that SPA. Once dedicated surveys have clarified the relative importance of other potential areas for the various species around the shores of both mainland Scotland and its islands, consideration may also be given to inclusion of other species using stage 1.4 of the SPA UK Site Selection Guidelines’

It is a case of fact that already it is proven that the waters around Tiree, for many of 10s of km offshore and with concentrations at Skerryvore and throughout the proposed location of the Tiree Array are the wintering grounds of a minimum of 42% of the British Population of the Great Northern Diver. The shallow waters of the Skerryvore reef and the entire North to south transect of the Array location is a global hot spot … of global importance. The water depth from 0m to 50m is a favorite habitat for this internationally protected species.

Further support … given that we have at least 42% of the British population of Great Northern Divers what else does the waters around Tiree have to do to be the protected wintering grounds?

A comparison of other species and other percentages of population all of which visit our Island:

This site qualifies under Article 4.1 of the Directive (79/409/EEC) by supporting populations of European importance of the following species listed on Annex I of the Directive:

During the breeding season;

This site qualifies under Article 4.1 of the Directive (79/409/EEC) by supporting populations of European importance of the following species listed on Annex I of the Directive:

This site also qualifies under Article 4.2 of the Directive (79/409/EEC) by supporting populations of European importance of the following migratory species:

During the breeding season;

Other protection status:  A small (2.4%) section of the Coll (corncrake) SPA (UK9003033) is designated as a site of Special Scientific Interest under UK legislation (Crossapol and Gunna SSSI).

So where does the Scottish Government and Scottish Power Renewables (Iberdrola) go from here?

We have already shown that the area of inshore waters for many 10s km out far exceeds the criteria for SPA status … that the area is of British, European and International importance. That it is a crucial hereditary wintering ground for the Great Northern Diver. The birds cannot simply move elsewhere, hereditary instinct, trial and error; evolution has selected their wintering grounds, a symbiosis of environment and creature, food and shelter.

The JNCC, SNH, RSPB, BTO and now the NTA are all aware of the situation and, the grave consequences this proposed development will have on this endangered species.

All are aware that the area should have been adopted as an SPA prior to exclusive rights been released by the Crown Estates.

Maybe a burecratic error or an exceptional work load or a hidden agenda has delayed the process of certification and protection.

One thing is for certain, the Great Northern Diver is here to stay, unless the Scottish Government and Scottish Power Renewables feel the sacrifice of a species supports the generation of ‘Green’ electricity in our home waters …

Do the cash returns for a Spanish Multinational such as Iberdrola outweigh the bio diversity of our beautiful home isle?