Summary: In this report, noise diary complaints recorded by local residents were compared with EPA measured low frequency and audible noise inside a home near the Waterloo wind farm, on the same evening as a deliberate shutdown of the turbines. Sleep disturbance, excessive noise and annoyance complaints coincide with measured elevated levels of low frequency noise (LFN) and audible noise inside the home. It can be seen that when the wind farm was turned off and then on again, “C” weighted, Unweighted and LAeq(LF) levels fell and rose around 10dB. This suggests that the wind farm is making a significant LFN contribution to local environment. The change in “A”weighted levels as a result of the shutdown was not significant, suggesting that “A” weighted levels do not accurately reflect the impact of the turbines on the residents.

The Waterloo wind development commenced operating in October 2010 and comprises 37 Vestas V90 wind turbines in a 17 km line along a North South ridge line in the Mt Lofty Ranges of South Australia.

The Waterloo area is home to a mixed farming community in the Clare and Gilbert Valleys Council area in the Mid North of South Australia. A significant proportion of the population are long term farming families involved with Primary Production and related support industries. Retirees, pensioners, working families, tree changers, lifestyle block owners and weekenders also make up the local community as they are attracted by the amenity provided by the rural setting, hills and ranges, native fauna, creeks and natural vegetation of the local environment. Regional Development Australia stated in August 2010 that the population of the local Council area of Clare was “rising as a result of interest from retirees and people seeking a different pace of life.” (1)

Three township houses and one farmhouse (4.5 km west of the turbines) have been vacated because of effects attributed by residents to the wind farm – particularly sleep disturbance and physiological symptoms (pers comm).

One habitable house with 11 turbines within 2 km has remained vacant for more than 2 years since the death of the elderly owner. (2)

The Waterloo wind development has been the subject of a large number of complaints from residents up to 10 km from the turbines. The majority of complaints relate to NOISE, VIBRATION, SLEEP DEPRIVATION and HEALTH EFFECTS. In all, 4 Homes have been abandoned and many residents have to regularly “get away” in order to get adequate sleep and recover. (2)(3)(4)

The EPA study was instigated in response to ongoing noise, vibration, sleep disturbance and physiological symptom complaints, including home abandonments. Residents living up to 10 km away from the wind farm have complained about adverse impacts and cite the wind farm as the source of their disturbance. (2)(3)(4).

During the 10 week period, the EPA collected noise data at 6 sites between 1.3 and 8 km from the turbines. 28 households volunteered to keep noise diaries on forms supplied by the EPA, which the SA EPA then used to help them focus their analysis on specific events.

Only noise diary entries reporting audible noise and vibration were taken into consideration by the SA EPA as this was not intended to be a health study. (4)(5)

Residents’ reports of awakenings, poor sleep, symptoms and sensations have been disregarded by the EPA as indicators of noise emissions experienced by the residents.

As part of the study which commenced on 8 April 2013, the SA EPA conducted 6 shutdowns (on-off testing) on 1st and 30th May and 5th, 10th, 12th & 14th June to determine what contribution, if any, the wind farm was making to the local noise environment.

Turbines were turned off a for a period of around 50 minutes for each shutdown.

Acoustic measurements for before, during and after each shutdown are available in graphs found on the EPA’s website report. The majority of the EPA report of their Waterloo study is available as a pdf at the following link: http://www.epa.sa.gov.au/xstd_files/Noise/Report/Waterloo_wind_farm_report.pdf. (Note, at the time of writing, on this link, the shutdown dates are incorrect in the pdf – the last 4 shutdowns were in June, not May as listed in Table 1 of the pdf.)

Individual components of the EPA report, including weekly noise level graphs for each site and noise diary summaries are available as a series of separate webpages and can be downloaded at: http://www.epa.sa.gov.au/environmental_info/noise/wind_farms/waterloo_wind_farm_environmental_noise_study

The author of this comparison has been provided with 17 of the 28 diaries by residents and has been able to compare the residents perceptions with the EPA’s acoustic analysis.

Looking at diary entries for both audible and inaudible events reveal that there is a significant impact from the wind farm on the residents and that events described by the residents coincide with times when the EPA’s measurements show elevated levels of Low Frequency Noise.

This comparison paper focuses on Shutdown 1, INSIDE the home at the EPA West site. Graphs and tables sourced from the EPA’s Waterloo reports have been used as a basis for the following comparisons and comments. These include:

All Waterloo turbines were shut-down for a 50 minute period from 20:10 to 21:00 Central Australian Standard Time (CAST). Noise diary entries obtained from 2 study participants: the West site resident (W) and a neighbour (N), have also been compared with the EPA report. (extracts appear in the following)

At this time of the day, the West residents are home and watching tv in the lounge room. The EPA’s single microphone is in a spare bedroom with the door and window shut. The West residence is approximately 2.5 km from nearest WTG.

At the Neighbour home, coinciding with the shutdown, it is bedtime for the 3 small children and the parents are watching tv. N is approximately 4 km from the turbines.

The SA EPA noise graph for Shutdown 1 INSIDE the WEST home (see Figure 1) shows that: 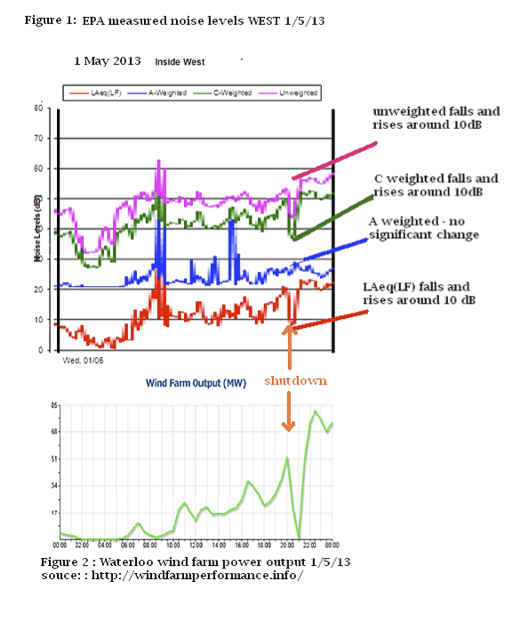 At 21:35 SA time (22:05 on figure 2 wind farm performance graph),soon after turbines resume operation after the shutdown:

The EPA Record Analysis for this period shows:

EPA somehow concludes: no significant noise impact, wind farm is compliant, no review of the guidelines in warranted.

Shut down 1 at WEST showed that the EPA’s conclusion (that the wind farm does not create an adverse noise impact at this home) is not supported by their own data or by the residents diary entries.

“A” weighted values may not accurately reflect the impact of the turbines on the residents.

Operation of the wind farm contributed around 10dB of low frequency noise to the local environment.

Limiting compliance assessment to audible parameters does not satisfactorily address the significant impacts caused by LFN from wind turbines.

Consideration should be given to qualitative as well as quantitative assessment.

Acoustic analysis of INSIDE measurements, immediately before and after Shutdown 1, show values which exceed SA EPA noise guidelines.

The EPA could not hear wind farm noise (which was disturbing the residents) on their audio recordings, calling into question the merit of this methodology.

Noise limits recommended by DEFRA, the Danish authorities and Dr Norm Broner (60dB(C))
were exceeded on May 1st 2013.

The author acknowledges the use of the SA EPA’s data in preparing this report.