A few [more than a few –Ed.] recent news stories have told about individuals and communities who live in proximity to wind farms in the northeast United States and in Japan [and in Canada, England, Ireland, other parts of the U.S. … –Ed.], and who started to complain about noise from wind turbines shortly after the facility began operations. The author’s own experience demonstrates that noise complaints and adverse community reaction can occur even though a wind farm is operating in compliance with local noise limits. …

Figure 3 shows the extent of people highly annoyed by wind farm noise based on the dose-response relationship given in Equation (1). As shown in the figure, within approximately 0.8 km (1/2 mile) of the wind farm, 44-percent of the population would be considered highly annoyed due to wind farm noise. At a distance of approximately 1.62 km (1 mile) from the wind farm, the percent of highly annoyed people is expected to drop to 4-percent. Such information could be useful for developers and/or regulatory authorities during the siting of a wind energy facility when deciding upon appropriate set-back distances.

The results of Figure 3 could be compared to the results of a social survey performed for this same wind farm. Figure 4 shows responses to three questions from a social survey performed in 2001. In the top chart of the figure, 44-percent of the respondents living from 800 feet to 1/4 mile of the wind farm stated that the turbines are “causing a problem with noise.” From approximately 1/4 mile to 1/2 mile from the wind farm, the percentage of respondents indicating a problem with noise increased to 52-percent. Similar trneds are shown in the responses to questions in the middle and bottom charts of Figure 4. … It should be noted that the findings of the committee with oversight of the social survey suggested that the participation of a land-owner in the project may have had an influence in the elicited response. … 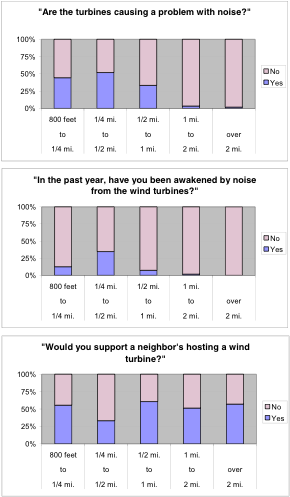